US Women's Soccer team boasts many talented athletes who have earned fame and fortune to their names. Photo Source: Wikimedia Commons.

American soccer has been growing this last past decade or so, but women's soccer has been at a notable height for quite a long time. With the team winning the inaugural Women's World Cup in 1991, the USWNT team has not shied away from showcasing dominance and prowess in the game. Having been a driving force in the female soccer world, the US Soccer Federation has also provided the players with adequate benefits.

However, even though the performance in women's soccer is miles better than that of men's, the voice for equal pay has generated some controversy in the country. Even so, there are a few athletes who have managed to make quite a fortune out of the sport. Hence, let's take a look at the top seven richest US female soccer players in this article.

We are starting off our list with the legendary Carli Lloyd. Born Carli Anne Hollins, she is a former two-time Olympic medalist who played as a midfielder for the United States scoring 134 goals for the team. Lloyd made her debut in the national team in 2005, four years after donning the jersey of the U-21 team. Following her decades-long success as a soccer player, Carli Lloyd's net worth is $2 million. 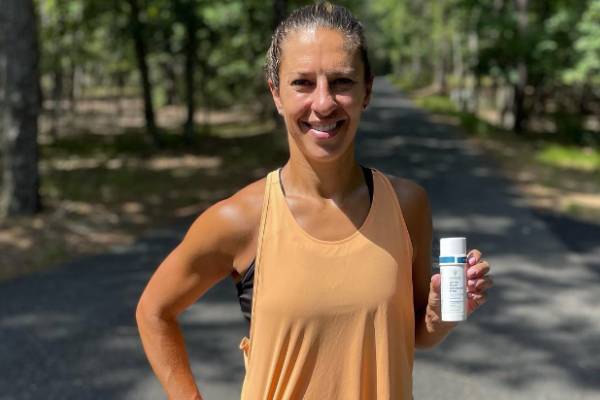 Talking about her US soccer achievements, Lloyd led the US team to finish second at the 2011 FIFA Women's World Cup. She was also named the US Soccer Athlete of the Year in 2008 having scored the winning goal in the finals of the 2008 Summer Olympics. It was followed by another gold-medal-winning goal in the 2012 Summer Olympics. Also, prior to her retirement in 2021, Carli Lloyd's salary was estimated to be $518,000 annually playing for the national team.

Aside from that, the retired soccer player has partnered with Nike for quite a while and had signed another sponsorship deal with Visa after the 2015 World Cup. She has also penned deals with Heineken and Beats by Dre. Lloyd has also released some merch which includes sweatshirts and t-shirts between the price range of $35 and $42. Hence, Carli Lloyd's net worth being in the multi-million dollar range is not surprising.

Hope Amelia Stevens Solo is a former goalkeeper who won the World Cup once and the Olympics twice with the US team. Known for her prowess between the sticks, Solo played for the national team for 16 years, having made her debut in 2000. Thus, given the achievement she has enjoyed in her career, Hope Solo's net worth is estimated to be $3 million.

Hope was part of many soccer teams who must have paid her a considerable salary. Likewise, the American soccer player signed major endorsement deals with big companies like Nike, Gatorade, Simple Skincare, and the Bank of America, among others. Hope also competed in the reality series, Dancing With the Stars in 2011, followed by publishing her autobiography 'Solo: A Memoir of Hope', a year later. That must have earned her quite some money. 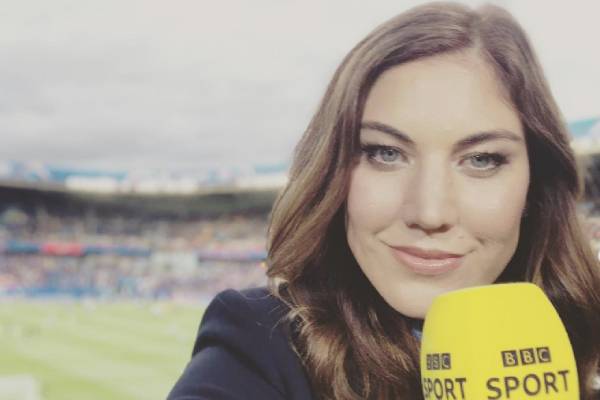 Thanks to Hope Solo's net worth of $3 million, she has been able to invest in several properties. According to MARCA, the athlete paid $1.2 million for a home in Kirkland, Washington, in 2012, and sold it for $1.75 million four years later. The estate housed a beautiful swimming pool, a sports court, and provided mountain views.

Julie Beth Ertz is the first active US soccer player coming on our list. She previously played as a defender for the Chicago Red Stars, before being traded to Angel City FC in 2022. Having made her national team debut in 2013, she has gone on to win two World Cups and two CONCACAF Women's Championships.

Aside from that, Ertz was named the US Soccer Female Player of the Year twice in 2017 and 2019 and also won the CONCACAF Golden Ball in 2018. Thanks to her prosperous soccer career, Julie Ertz's net worth is estimated to be $3 million.

As per ESPN's 2020 article, USWNT's contracted players had a base salary of $100,000 per year, with an additional $67,500 for the Tier 1 players. The athletes also have different incentive-based bonuses for a win. Julie Ertz's salary must also be significant.

Likewise, the sportswoman isn't the only one bagging millions in her household. Julie Ertz's husband, Zach Ertz, has a fortune worth $16 million. The couple also bought a $1.25 million condo in the Waterfront Square Complex.

Alexandra Patricia Carasco Morgan is considered one of the best players on the US team and has won a multitude of trophies. Her wins include two World Cups, one Olympic gold, three CONCACAF Championships, and a UEFA Champions League title. Morgan is one of the most influential players in women's soccer who has won several golden boots and golden balls. Hence, Alex Morgan's net worth is estimated to be $3 million.

Likewise, the sportsperson has signed many endorsement deals with major companies such as Nike, Coca-Cola, Panasonic, Bank of America, and P&G, among others. Also, after winning the 2019 World Cup, the US women's team earned $4 million. Moreover, after a negotiation with the federation in 2017, star players such as Morgan and a few others earned $400,000 per year, along with other bonuses.

Here are some of Alex Morgan's salary breakdown:

Besides, Morgan signed a deal with publishing company Simon & Schuster to write a four-book series for middle schoolers called The Kicks in 2012, and her first novel Saving The Team came on May 14, 2013. Alex wrote her second novel Sabotage Season less than four months later. The Kicks was later adapted to a live-action kids' comedy series on Amazon Prime in 2015. Thus, looking at her multiple ventures, Alex Morgan's net worth being $3 million is not that surprising.

Mary Abigail Wambach is a retired USWNT player, coach, and member of the National Soccer Hall of Fame. Wambach has received US Soccer Athlete of the Year honors six times and is the highest all-time goalscorer for the national team. With her 184 goals, she is regarded as one of the greatest female players of all time. Likewise, her earnings are also not disappointing, with Abby Wambach's net worth being $4 million. 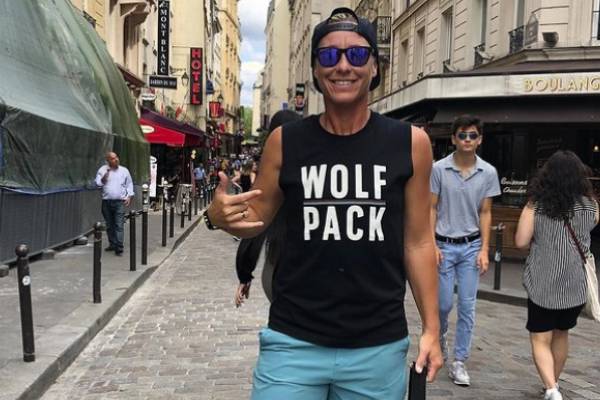 Abby Wambach is considered one of the greatest female soccer players of all time. Image Source: Abby Wambach Instagram.

As of 2015, Abby Wambach's annual salary was $200,000. With her sponsorship deals with Nike, Gatorade, Deloitte, Cree Light Bulbs, Triax Wearables, and Scotts Lawn Care, her income had reached $1 million annually. Thus, Abby Wambach's net worth being $4 million is palpable.

Megan Anna Rapinoe is a famous winger who is well known for her advocacy of equal pay for women soccer players around the world. After winning the 2019 World Cup, she was named one of the best players in the state. Having won two World Cups, one Olympic gold, and three CONCACAF Championships, she has gone on to win Ballon d'Or Feminin along with the golden boot and golden ball. Hence, Megan Rapinoe's net worth is $5 million.

The California native has signed major endorsement and sponsorship deals with Nike, Samsung, BodyArmor, Procter & Gamble, among others. She also signed a contract with Victoria's Secret in 2021, followed by other deals with top companies such as Budweiser, Hulu, and Visa. She must have accumulated a significant amount of money from those deals. 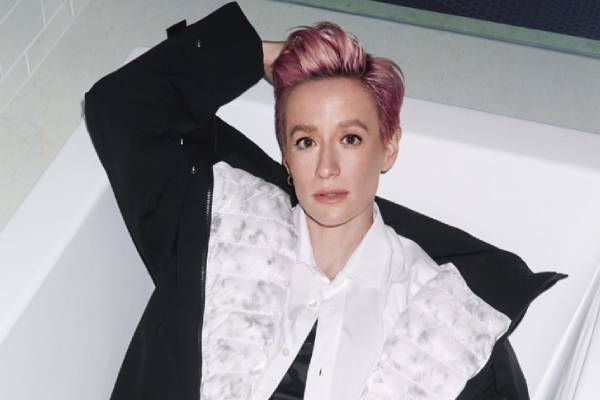 Megan is currently the fourth-best paid player in USWNT. Megan Rapinoe's salary is $447,000 per year at OL Reign. Also, according to Forbes, she earned $4.2 million in 2020. Hence, Megan Rapinoe's net worth is a massive $5 million.

We are at the very last of our list and coming at number one is none other than Mia Hamm. Mariel Margaret Hamm-Garciaparra is a former two-time Olympic gold medalist and two-time world champion soccer icon. She is well known for her top-class performance in the late 80s and early 2000s. Hamm was also the face of the Women's United Soccer Association (WUSA) and is regarded as one of the greatest female soccer athletes of all time.

Though the retired sportswoman mainly played for the national team, she managed to amass quite a fortune to her name. As such, Mia Hamm's net worth is a whopping $10 million. It also included her earnings from her endorsements with Nike, Pepsi, Nabisco, Fleet, Powerbar, etc. She is also an author and has written the book Go For the Goal: A Champion's Guide to Winning in Soccer and Life.

Thus, the retired sports personality is the richest soccer player on our list. With Mia Hamm's net worth of $10 million, she has also purchased many homes and real estate. For instance, Mia purchased a home of 4,447 square feet in LA which cost her $2.2 million in 2016. 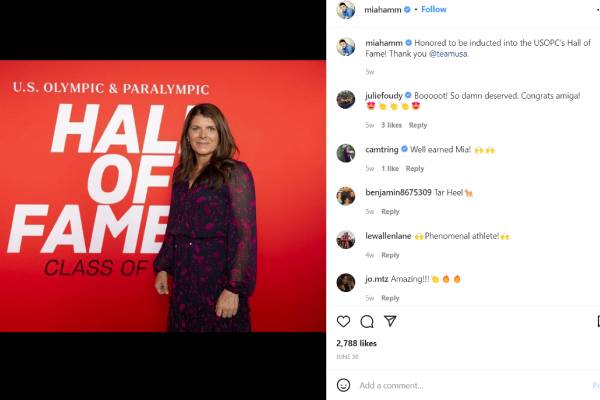 Hence, from this list, we can deduce that US women soccer players also earn a hefty amount. This should not be a surprise since they work so hard and give their all for the game. Let's hope they can keep entertaining us and earn the income they deserve.