Devil in Human's Form, Jeffrey Dahmer, is the name of the serial killer who found life in killing young men and boys between 1978 and 1991. If it weren't for his last victim, Tracy Edwards, the number of Dahmer's victims would exceed 17. After getting a life sentence in prison, Dahmer's prison inmate Christopher Scarver killed him and another man, Jesse Anderson, on November 28, 1994, while cleaning the prison gymnasium together.

So, did Dahmer show signs of evil while he was a child? What led to the rise of Jeffrey Dahmer's monstrous side? Did his parents abandon him? Did he have any friends? How did his last victim escape? What happened after he was caught? How did the serial killer Jeffrey Dahmer die? Or why did Scarver kill him? Did Dahmer wish to die?

Let's break down all the details by exploring Jeffrey Dahmer's life, relationship with his parents, murders, prison sentence, final days in prison, and death.

Jeffrey Dahmer was born to parents Joyce and Lionel Dahmer in Milwaukee, Wisconsin, on May 21, 1960. Dahmer's scientist and chemist father described him as a happy and sweet child in his book, A Father's story and interview with Oprah Winfrey in 1994.

While writing his book, Jeffrey Dahmer's father analyzed in many ways and investigated a lot by going through the recordings he took in the past of young Dahmer. He wanted to learn if his son's evil personality had anything to do with the environment or if it was genetic or any other factors.

Lionel said their family was ordinary. He spent time goofing around with his son Jeffrey when possible. Dahmer was never molested or physically abused while he was a child. The father-son went fishing, played tennis, sledding, tobogganing, raised lambs, and raised chickens for three years. However, Lionel felt he wasn't sure if he was emotionally equipped to handle what was going on in his son Dahmer's mind.

He, however, shared in his book that when Jeffrey's mother Joyce was pregnant with him, she had a difficult pregnancy. Due to nausea, irritation with odor, noise, muscle cramps, and other problems, she couldn't continue to work. Joyce became highly irritated with every sound and smell and complained much to her husband. There used to be many arguments between Lionel and Joyce as pregnant Joyce was irritated. Joyce also became highly dependent on pills to relieve physical and emotional stress. 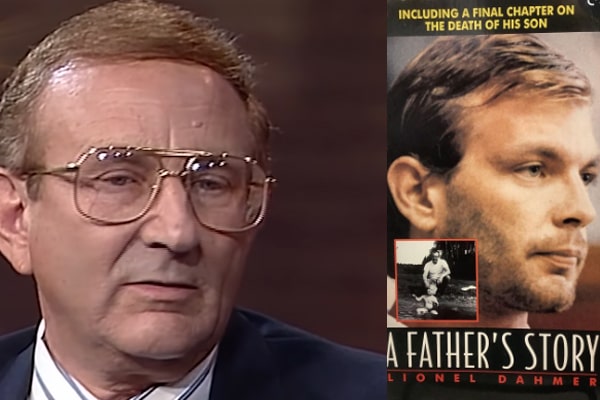 After a lot of struggle, Jeffrey Dahmer was born, but young Jeff Dahmer used to have a lot of ear and nose infections and would get injections at the local hospital.

When Dahmer was four years old, he needed surgery to correct a double hernia. That time while talking about his body, little Jeff asked his father what would happen if his weenie would be cut out? That time, his father passed him off, thinking it was an innocent question out of interest.

Similarly, before the operation, at the same age of 4, Lionel Dahmer went underneath the house to clear debris and trash. There, he found titbits, bones left out by skunk-like creatures after they ate small animals. At that time, Lionel noticed Jeffrey picking up the bones and throwing them back in the trashcan and seemed amused with what they were and the noise they made. At that time, too, his parents thought it was a kid's curiosity act.

Dahmer's first-grade teacher noticed and said to his father that Jeffrey was a distant child. He did not associate with other children, paced back and forth in the playground doing nothing, was not communicative, and did tasks with no interest.

Lionel was a timid kid and thought Jeffrey might be shy too. All these might not show that child showing such nature could grow up to be Jeffrey Dahmer. However, Lionel thinks parents need to be concerned and watch out.

The birth of Dahmer's younger brother and family moving a lot from one place to another made him quiet, distant, and withdrawn. By his early teens, Dahmer was primarily to himself with little to no friends.

Dahmer claimed in his interviews that he started becoming drawn toward necrophilia and murder around 14. Young Dahmer showed interest in collecting dead animals and breaking the bones of dead animals. He liked experimenting with such stuff, which her mother did not like, but who knew such a hobby would turn him wilder and wilder, as Dahmer, in his interview, shared that he started killing animals too. However, it also seems that his parents' arguments, divorce a few years later, and mother leaving him everything triggered his psychopathic journey.

Dahmer also became an alcoholic. In terms of education, Dahmer couldn't continue and dropped out of Ohio State University after one-quarter term. Dahmer's father remarried and convinced him to join the Army; Dahmer agreed and enlisted in December 1978.

But Dahmer didn't stop drinking. As a result, in early 1981, the Army discharged him. Dahmer then returned home to Ohio. Lionel sent Dahmer to live with his grandmother in Wisconsin. Once, Lionel found a box in his room, and Dahmer told his father not to open the box as it had adult stuffs. Lionel believed as he had previously found similar things in his son's room.

And since Lionel thought of his son as a timid person with many inferior feelings, watching or reading such stuff was expected. The problem was that Dahmer's alcohol problem continued. He was arrested a few times and once again in 1986 when two boys accused Jeffrey Dahmer of doing indecent act in front of them. Then, he received a one-year probationary sentence.

Jeffrey Dahmer's father had his own reasons to not suspect his son but it was true that he had a son who was developing into a monster.

Jeffrey Dahmer's first murder happened in June 1978, when he picked up a hitchhiker, Steven Hicks, and took him home to his parent's house for a beer. After some time, when Hicks tried to leave, knowing Dahmer had no intention to take him to a concert they agreed to, Dahmer struck him in the head and strangled him with a barbell.

Dahmer then dismembered his first victim's dead body, packed it in plastic bags, and buried them. Later he dug out the remains, crushed the bones with a sledgehammer, and scattered them.

Dahmer's second victim, Steven Tuomi, went into a hotel room with him and drank a lot. When Dahmer woke up the following day to see Steven dead with no memory of what happened, he put Tuomi's corpse in a suitcase and brought it to his grandmother's basement. There, he dismembered the corpse before disposing of the remains.

Dahmer's grandmother forced Dahmer to move out in 1988 due to his late nights and drunken habits. But she didn't notice that her grandson had killed two other victims in her house. In 1989, however, Dahmer again visited his grandmother and used her basement to lure in Anthony Sears, drug him, strangle, mutilate, photograph, and dispose of his remains.

Dahmer murdered total of 17 men between 1978 and 1991. He engaged in intimate acts with their bodies and kept body parts and photos as souvenirs. For example, Dahmer's neighbor Sandra Smith on May 1991, called the police reporting that an Asian boy was running naked in the street. When the police arrived, they believed Dahmer said the boy was his 19-year-old lover and sent them back to his place. Dahmer then killed the boy and did his killing rituals.

Two Milwaukee police officers found Tracy Edwards, a 32-year-old African American man wandering the streets with handcuffs on his wrist. They investigated him and found out that Dahmer had drugged and restrained him. The police arrived at Dahmer's apartment, where he calmly let them into his room.

The officers found Polaroid photographs of dismembered bodies lying around, freshly severed heads and body parts in the refrigerator, videotapes, video camera mounted on the wall. Jeffrey Dahmer was arrested.

Tracy Edwards testified everything that happened to him. 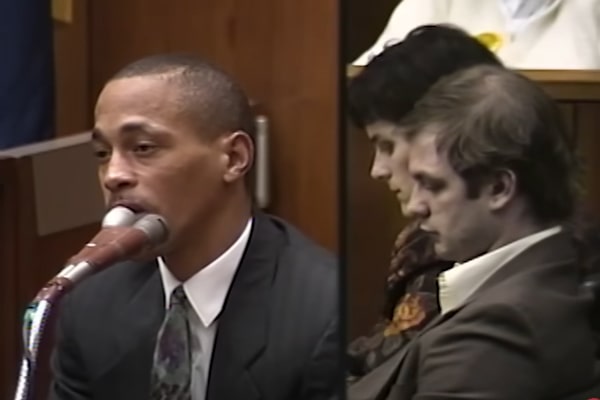 Tracy Edwards testified in the court about how Jeffrey Dahmer lured him in his apartment, handcuffed him and was ready to kill him. Source: Social Media/YouTube

Dahmer accepted that he was guilty but said he did so out of insanity. Jeffrey Dahmer's serial killing ended after he was convicted of 15 murders and sentenced to 15 consecutive lifetimes in prison. He admitted killing two more, but there was not enough evidence to prove it. Dahmer was held at the Columbia Correctional Facility in Wisconsin. He served there for three years and four months in prison before he was killed.

Who Killed The Killer Jeffrey Dahmer?

Christopher Scarver, a convicted murderer of a job trainer, claimed that he murdered because he heard voices of people motivating him to kill.

When Scarver met Dahmer and learned his conviction, he kept his distance from Dahmer until 1994. However, he killed Jeffrey Dahmer and another prison inmate Jesse Anderson while cleaning the prison gymnasium. Scarver beat Dahmer to death with a weight bar before killing Anderson.

Scarver mentioned that he killed them because they antagonized him first.

Christopher Scarver's son Chris Scarver who vows not to be voilent, spoke of his father below.

It seems Jeffrey Dahmer who wished to die did so on purpose because he didn't want freedom, he wanted death for himself. Since, Jeffrey Dahmer was a college dropout, alcoholic, he didn't have much income to have proper net worth while he lived. He used his parent's house, grandmother's basement often and then an apartment. Dahmers was in mid 30s when he died.

Netflix series, Monster: The Jeffrey Dahmer Story, starring Evan Peters portraying as serial killer Jeffrey Dahmer, rose to the no.1 spot and trending in Netflix after its release on September 21, 2022. Though the actors were highly praised for their performances, the 10 episodes show received criticism specially from the victim's family who didn't have any information about the show before its release and having to relive the horrible experience of loosing their loved ones again. There were other movies made too but the recent series garnered millions of attention of people worldwide.