Rapper Tee Grizzley is on fire. Yes, his new song 'Ms. Evans 1' is trending on YouTube. And Grizzley has already announced his new project 'Chapters Of The Trenches' to be released on October 14, 2022. Tee has released three songs this September.

It looks like marrying his baby mama has brought great luck to Grizzley. That's correct; Tee Grizzley's wife, My'Eisha Agnew is the mother of his son. Celebrating his life with family, Grizzley is putting his heart into creating new projects and is known for great storytelling via his songs. Along with rapping, Tee Grizzley is also a video streamer.

Let's get into more detail here!

The song is very catchy and exhibits Grizzley's talent for storytelling. His fans say that watching his video song and listening to him singing is like watching a movie.

In the video song, we could see a teacher involved with two students, who make a wager on who will have the best experience with the teacher. And the best thing is Tee has left fans curious to see what would happen in the upcoming videos of Ms. Evans.

Tee Grizzley's Tribute to His Mama In His Song

Grizzley had once said that he raps about real life; he doesn't have any reason to lie. And that's evident in his songs.

Rapper Tee is very close to his family. He has written songs like 'Locked up' related to his mother and brother's imprisonment.

Yes, Tee Grizzley's mother, Latoya Perry, was released from Prison in December 2020. Perry was sent to prison with a 15-year prison sentence as she was charged with distributing crack cocaine in Detroit, Michigan.

In the post above, Tee shared that for nine years, the prison gave his mama a skinny mattress, nasty food, limited communication, and surrounded her by chaos, and she still hasn't broken down. It was a post in July 2019. His wish was granted when he could go and get his mama on December 2020 out of prison to home.

Having experienced his mother's situation, Tee shared his feelings on his 2019 track, 'Locked up,' which showed how the criminal justice system affected his mother and his entire family.

Grizzley also lost his aunt and manager Jobina Brown who was gunned down in Detroit on August 20, 2019. A shooter on foot was reported to have opened fire on Tee Grizzley's Cadillac Escalade, shooting Brown, who was sitting in the back seat, in her left side.

Tee was with her at that time, sitting in the passenger seat. He and the driver were unharmed. However, his aunt couldn't survive her wounds despite being rushed to the hospital. She was 41 years old when she died. Must say, Grizzley has gone through a lot in his life and experienced a lot of grief and separation in his family.

But now, he is happy to have his mom,and brother back.

In his post, Tee was seen kneeling down on one knee with an engagement ring surrounded by rose petals. He said, "If I tell, I love you, I mean it." So romantic, isn't it?

Anyone could have said yes to such a romantic proposal.

Tee Grizzley's son Terry Sanchez Wallace III is very lucky to have witnessed such love and beautiful wedding of his parents. The family of three is seen to be having great times together. Grizzley often posts the trio traveling, eating, shopping together.

Grizzley loves to spend time playing with his son. Look how cute the father and son look together. Terry looks super cute in his sunglasses. 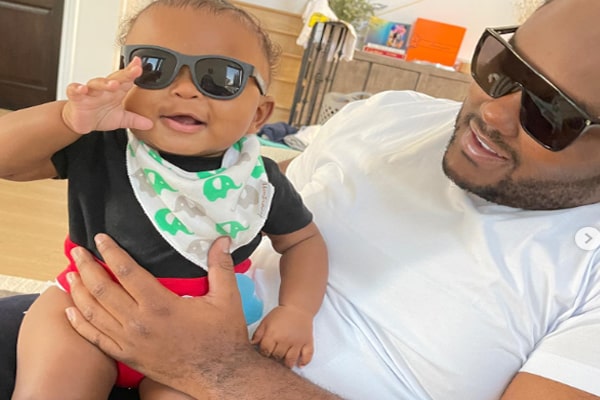