John Felix Anthony Cena Jr, notably known as John Cena, is one of the world's greatest wrestlers. He is a professional wrestler, actor, and TV presenter who earned his fame through his hard work and skills, inside and outside of the ring. He is also nicknamed The Hustle Loyalty and Respect Soldier, The Champ, The Chain Gang Soldier, and many others.

The professional wrestler has won the world championship title 16 times along with other prestigious awards. Cena has also appeared in Hollywood movies such as The Marine, 12 Rounds, Trainwreck, Ferdinand, Bumblebee, and F9. The talented wrestler has gained millions of followers worldwide through his works in movies, songs, charity work, and his professional wrestling career. Let's know more about John Cena's biography and other personal details.

John Cena was born in West Newbury, on the 23rd of April 1977. He was born to parents John Felix Anthony Cena Sr. and Carol Cena. His father is of Italian descent, while his mom has English and French-Canadian ancestry. He lived with his loving parents and siblings in Massachusetts. The wrestler has an older brother named Stephen Cena and three younger brothers Matt Cena, Sean Cena, and Dan Cena.

The Hollywood actor went to Central Catholic High School in Lawrence before transferring to Cushing Academy in Springfield, Massachusetts. John Cena graduated from Springfield College in 1999 with a degree in exercise physiology and body movements.

John Cena wanted to pursue a career as a wrestler. He trained to become a professional wrestler in 1999 at Ultimate Pro Wrestling in California-based Ultimate University, operated by Rick Bassman. He held the UPW Heavyweight Championship in April before leaving UPW in March 2001.

He made his unofficial debut under the alias The Prototype for World Wrestling Federation in the television program called Smackdown!. He lost his first match against Mikey Richardson but received another fighting chance to redeem himself on a match with Aaron Aguilera and won.

In 2001, the wrestler signed a developmental contract with the WWF and was assigned to Ohio Valley Wrestling (OVW). He held the OVW Heavyweight Championship title for three months and OVW Southern Tag Team Championship with Rico Constantino for two months.

John Cena wrestled many talented opponents like Shelton Benjamin and Tommy Dreamer on WWF house shows. He made his WWE television debut on June 27, 2002, with his opponent Kurt Angle in which he lost. He was congratulated by many fellow wrestlers like Billy Kidman, Faarooq, Rikishi, and The Undertaker after the fight and gained a large following, which started his feud with wrestler Chris Jericho. The Champ began performing in the ring and fought many wrestlers like B2, Undertaker, Red Dogg, Eddie Guerrero, Chris Benoit, and many others throughout his Smackdown career.

Cena became a fan favorite after losing a fight to Kurt Angle but joined his team at the 2003 Survivor Series. He also participated in a 20-man battle royal to earn a WWE Championship match in which Chris Benoit and Cena were both declared joint winners after the two managed to eliminate each other at the same time. However, Benoit won a match against Cena the following week to earn a WWE Championship match against Brock Lesnar.

The professional wrestler, actor, and TV presenter has earned a lot of money through his successful career. According to Celebrity Net Worth, John Cena's net worth is estimated to be $60 million. He started as a wrestler but has amassed a massive fortune working as an actor and a rapper. The Champ has appeared in many films and TV shows, which adds to the wrestler's net worth.

Furthermore, according to Bleacher Report, John Cena's salary back in 2016 was $9.5 million. 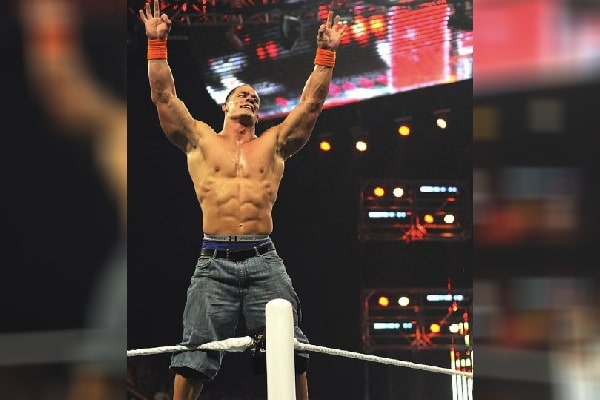 According to Celebrity Net Worth, John Cena has a net worth of $60 million. Image Source: Instagram/johncenaofficial.

In addition to acting, John Cena is also a rapper. The wrestler has made his own songs for the WWE. His fourth theme song Basic Thuganomics was featured on the WWE soundtrack album, WWE Originals. He recorded his debut album You Can't See Me, with his cousin Tha Trademarc, which featured his entrance theme song, The Time is Now, and the single Bad, Bad Man. The pro wrestler was also featured on Wiz Khalifa's two singles All Day and Breaks for the WWE 2k15 video game soundtrack.

The actor's endorsement deals with various companies also impact John Cena's net worth. He has appeared in commercials for the energy drink YJ Stinger, Gillette, and Subway fast food. In 2020, Cena announced a partnership with Honda Motor Company and became its new spokesperson. Through his multiple endorsement deals, we can be sure that the wrestler receives a reasonable sum of money.

Along with his rise in career, John Cena has helped countless lives with his massive fortune. The Hollywood actor has granted over 600 wishes for children with fatal illnesses through the Make-A-Wish-Foundation, more than any other individual. He received the Chris Greicius Celebrity Award in 2009 and was also part of anti-bullying campaigns along with his support for cancer patients.

John Cena once wore a T-shirt with the Rise Above Cancer phrase to be a part of Breast Cancer Awareness Month. In June 2020, John Cena donated $1 million to Black Lives Matter as part of the #MatchAMillion initiative made famous by K-pop band BTS.

The wrestler was previously married to Elizabeth Huberdeau in July 2009 before the duo filed for divorce in 2012. The lovely couple had been dating since their high school days and got married a few years later. However, their marriage did not last because of various complications.

John Cena married for the second time to Canadian engineer Shay Shariatzadeh. The lovely pair started dating in 2019 after meeting when John was shooting for his movie Playing With Fire. They got married in a private ceremony on October 12, 2020. Shay Shariatzadeh was born in Iran and raised in Canada. She works as a product manager in Vancouver. The couples are not expecting any children yet as both of them are focused on their respective careers. 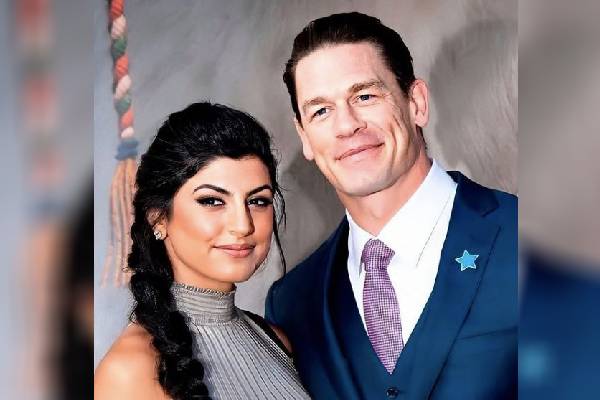 John and Shay got married in a private ceremony in October 2020. Image Source: Instagram/Johncenaofficial.

Cena was also in a relationship with a co-worker and former WWE star Nikki Bella, whom he publicly proposed at WrestleMania 33. However, the two ended their relationship and are now enjoying their new lives. Furthermore, John Cena had also announced that he does not want to bear any children because he does not want to be like an absent and unloving parent while he is focused on his career.