Chris Cole is a popular American skateboarder who has won several events in his career. Image Source: Chris Cole Instagram.

American skateboarder Chris Cole first came into the limelight as a teenager performing tricks at the skatepark in Philadelphia. Since then, he has gained worldwide fame and has won several awards, including five gold medals in the X Games. Cole is known for performing tricks like Backside 360 Kickflip and Switch Frontside flip.

Along with skateboarding, the two times Skater of the Year winner has also ventured into the business world. He has invested in various companies and is the co-owner of a few. So stick till the end to know more about Chris Cole's biography and his personal and professional details.

The skateboarder was born in Statesville, North Carolina, on March 10, 1982. He grew up in Levittown, Pennsylvania, alongside an older brother. Chris Cole's mother worked as a nurse working several shifts to provide for the family as his father was not in the picture. In Pennsylvania, Cole attended Pennsbury High School and graduated from there.

Chris Cole's family was small, and since his mother worked all the time, he and his brother were with their grandmother most of the time. And on one such occasion, Chris saw a skateboarder, which ignited an interest in the young boy. He then asked his mother for a skateboard, and after getting it, he started practicing various tricks. 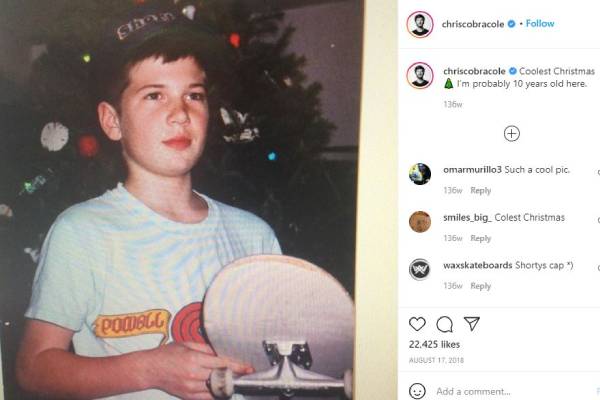 Chris Cole started skateboarding from an early age and participated in events as a teenager. Image Source: Chris Cole Instagram.

As a fourteen-year-old, Chris Cole was determined to make a living as a skateboarder. He started entering local and regional contests and won many of them. This helped him establish connections in the area and, by sixteen, had already landed sponsorships from major companies. Cole then continued in his mission and found immense success in his skateboarding career.

After setting his mind on pursuing a career as a skateboarder, Chris Cole started competing in events and performing difficult tricks. He attained professional status in 2000 and was appeared in Transworld's videos like VideoRadio and In Bloom. He was part of the G-Spot Skate and Snow team and later joined the Zero team with whom he won Thrasher's King of The Road in 2004.

The same year, he participated in Tampa Pro Contest and placed first in the Street Best Trick category. He then won a gold medal in Street, in the Gravity Games in 2005, and his award-winning streak continued to grow. Given below are the list of events where Chris participated and won various titles:

As seen above, Chris Cole has participated in several games over the years and won many of them. Along with these events, he has also won titles like the Readers Choice Award from Transworld Skateboarding and the Skater of The Year title twice (in 2005 and 2009) from Thrasher Magazine. All of these achievements show the success Cole has gained in his skateboarding career.

The American skateboarder has been participating in various events since the early 2000s and has won several of them. Due to which Chris Cole's net worth must be pretty substantial. His total fortune also includes the amount he has gained through sponsorships, collaborations with brands, and his own company.

Income From Skateboarding Events And Sponsors

Since starting his professional skateboarding career in 2000, Chris Cole has skated in numerous competitions. His most famous and financially successful participation is in the Maloof Money Cup. He was part of the games in 2008 and placed third, winning a small amount. However, a year later, he placed first and took home $100K in prize money.

The following year saw Cole pocketing the $100,000 prize money in the Maloof Money Cup once in New York and then in Costa Mesa, California. He then signed on to Rob Dyrek's Street League with an exclusivity contract. After this move, the owner of the event, Joe Maloof, offered a $1 million bonus to any skateboarder who can win four consecutive Money Cups to lure Chris back to the events.

Since joining Street League, the record-breaking skateboarder has participated in several championships held in various cities. He placed first in the Street League Super Crown World Champion and won $200,000 in prize money. This, along with other prize money, has undoubtedly helped increase Chris Cole's net worth.

While participating in the above-mentioned events, Cole was sponsored by many companies and brands. Throughout his career, Chris has been sponsored by companies like DC Apparel, Enjoi, Axion Footwear, Tensor Trucks, Circa Footwear, Omit Apparel, among others. His current sponsors include Moster Energy, Bones Bearings, Grizzly Griptape, GoPro, Indian Motorcycles, Thunder Trucks, and Kershaw Knives.

As per ZipRecruiter, a professional skateboarder earns $27,352 per year. However, as one of the most popular figures in the sport, Chris Cole's earnings might exceed this amount. Also, he has numerous sponsors, due to which his income might be enormous.

Just like many other skateboarders, Chris Cole also ventured out to other business opportunities. He co-owned Reigh Skate Shop in Pennsylvania and also was a silent stakeholder in the Zero skateboard company. Cole also founded Omit Apparel in 2011, but the skateboard clothing company is no longer in operation.

Along with owning businesses, Chris has also collaborated with brands and has designed products for them. He is an ambassador for the footwear company Fallen Footwear and collaborated with the company to put out several items, including shoes and apparel. His signature shoe model, Ripper and Trooper, are very popular among the fans. Given below are a few of those products and their respective prices as per the brand's official site:

Apart from the skateboard-related companies and collaborations, Chris is the co-owner of a BMX company called Cult. He is an avid BMX rider himself and sponsors a team of riders through his company. This business venture might have been beneficial in increasing Chris Cole's net worth.

Not only has the American skateboarder enjoyed a successful professional career, but he is also a happily married man. Chris Cole's wife, Christine Cole, is an artist and a tattoo enthusiast. The pair have been together since their teenage years and got married in 2007. Not only this, but the lovebirds are also parents to a son and a daughter. 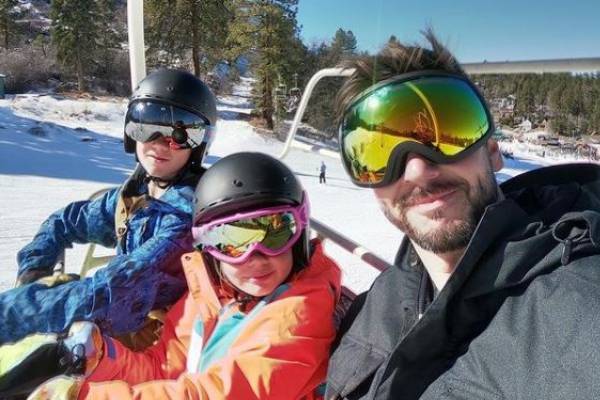 Chris Cole and his wife, Christine Cole are parents to a son and a daughter. Image Source: Chris Cole Instagram.

Chris Cole's son Wyatt Cole is the oldest among his two children. He was born in 2006, a year before his parent's marriage, and was his father's best man at the wedding. Just like his father, Wyatt is also interested in skateboarding. The father-son duo also shares a passion for music, and Chris has shared videos of them playing guitars. They are each other's best friends, and Wyatt seems to be the mini-me of the six-foot one-inch tall skateboarder.

The youngest member of the Cole family, Penelope Cole, is the spitting image of her mother, Christine. Chris Cole's daughter has also inherited her mom's artistic ability and is interested in makeup and face painting. However, she also shows a keen interest in skateboarding, and maybe we will see her competing in various events in the future.

Going through his Instagram, it is clear that Chris Cole is a family man. He has used his page to showcase his love for his wife and children. It is great to see that even after gaining professional success, his top priority is his family.