In recent years, bare-knuckle fighting has gained massive popularity. Although it is illegal to compete in some countries, the USA has legalized it, and many people have shown interest in it. Likewise, Lorenzo Hunt is one of the famous fighters from America who has gained fame and fortune by winning many fights in the Bare Knuckle Fighting Championship. He is a renowned name among MMA fighters and competes in the cruiserweight division of BKFC.

Bare knuckle fighting is a very dangerous game, and many people end up in the hospital after competing in the tournament. But Lorenzo is very passionate and has been showing his dominance in the sport. Likewise, many are curious to know about his personal life and professional career. Hence, in this biography, we'll try to give you essential information regarding Lorenzo Hunt.

Jason Ritter Net Worth Vs. Melanie Lynskey Net Worth - Who Is The Richer Amongst The Two?

How Did He Gain Attention?

Though the MMA fighter's stats are already impressive, he gained much attention after a video of him smashing a tomato in Joe Rigg's face was released. This incident occurred before BKFC 24 when Riggs looked at Hunt and murmured something under his breath. That's when Lorenzo took his half-eaten tomato and smashed it in Joe's face.

Besides that, a video of the Saint Augustine native's altercation with Hector Lombard, where the latter punched him twice, also went viral. In one of the interviews, the fighter mentioned that it helped him gain popularity as many people started Googling who Lorenzo Hunt was. It actually did over a billion hits on Google, Hunt stated.

Well, in the BKFC 22, Lorenzo won the light heavyweight belt beating Lombard. He again defended his title against Joe Riggs in BKFC 24. Now, let's talk more about his career and earnings.

Lorenzo Hunt Net Worth And Career

As mentioned earlier, Lorenzo has won many matches since making his debut. He started his career in bare-knuckle in 2019, and since then, he has performed excellently in every match. His fortune is primarily based on his earnings as a fighter. Likewise, Lorenzo Hunt's net worth must be immense, considering his exceptional career and wins.

As already mentioned, at BKFC 24, Hunt successfully defended his light heavyweight title by defeating UFC veteran Joe Riggs in less than two minutes of the second round. After his victory at the event, Hunt stated that he wanted to move up to cruiserweight and heavyweight to become a three-division champion. Alongside the light heavyweight belt, he holds the police gazette diamond belts, a belt recognizing his longevity and prestige in the promotion.

The sports personality's BKFC record is 7-1-0 as of August 2022. Having won many events, Lorenzo must have been paid handsomely. According to sportskeeda, on average, a fighter is paid $2,500 for a low-end BKFC match as of 2020. However, many of the well-known competitors in the Bare Knuckle Fighting Championship claim that their salaries are significantly higher.

Nevertheless, Hunt must have cashed notably after winning the lightweight division title and defending it in April 2022. Therefore, Lorenzo Hunt's net worth must be substantial.

Is Lorenzo Hunt Married And Has Children?

After you walk the road to success, people are curious to learn more about you. Similarly, Lorenzo's fans keep a close eye on him. They are interested in his personal information in addition to his professional career. Particularly, they are eager to know about Hunt's romantic life.

Well, going through his FB profile, the BKFC champ has posted pictures with a gorgeous lady several times. Though he hasn't revealed her identity, it seems like she is Lorenzo Hunt's partner. Also, who knows, she could be the fighter's wife as well.

Moreover, the 6' 0" tall sportsman has often shared pictures of a little girl on his IG. He is clearly fond of her and once mentioned how he considers himself lucky to have such a beautiful family. Hence, we can safely say that the adorable girl is Lorenzo Hunt's daughter.

Aside from her, Hunt posted a photo of a newborn in 2018. Could it be the baby is his second child? Sadly, not much about the little ones has been disclosed.

Hasn't Revealed About His Childhood

Hunt was born on September 9, 1982, in St. Augustine, Florida, USA. The champion hasn't mentioned much about his early life and family background. Nonetheless, Lorenzo Hunt's parents must be supportive and cheer him in his matches. It has not been disclosed if he grew up alongside his siblings or is a single child. 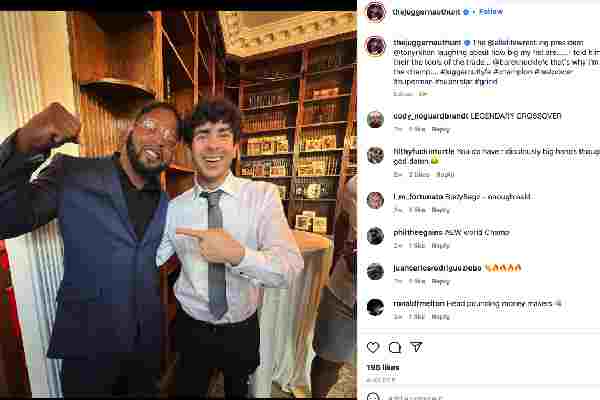 Lorenzo Hunt has not revealed any information regarding his childhood. Image Source: Lorenzo Hunt's Instagram.

Furthermore, when it comes to Lorenzo's education, he hasn't revealed where he studied to date. But, he must have always wanted to be a fighter, so he might have chosen this career path. Similarly, another person who has not revealed about his childhood is Louis Diame.

Overall, the light heavyweight champ's career has helped him rise to fame and achieve success. He is very dedicated and hardworking. He must be leading a comfortable life, and his family must also be proud of his success. We wish him continuous prosperity in the future.