Home Net Worth Tyler Blackburn Net Worth - Is The Actor A Millionaire?.

If you have been a devoted fan of teenage shows like Ravenswood and Pretty Little Liars, then you must have seen Tyler Blackburn, who has been acting since he was in elementary school. His most recent role was in the CW series Roswell, New Mexico, as Alex Manes. Tyler, who began his professional career in 2002, is also a talented singer and model, apart from being a spectacular acting persona.

The versatile actor has amassed significant accomplishments through his diligence and hard work. Along with fame, Blackburn must be making good earnings. So, how much money has he earned from his acting career and other ventures? As a result, this article discusses Tyler Blackburn's net worth and various income sources.

Tyler Blackburn Net Worth And Earnings

The dedicated actor was born Tyler Jordon Blackburn in Burbank, California, USA. He was welcomed to this world by his mother, Kim Blackburn, and his father. Blackburn has three younger brothers and one elder sister. Besides, when the actor was 10, he was diagnosed with a benign bone tumor, which was removed later. As a result, he has a 4-inch-long scar on his left shoulder.

The Burbank native began his professional career in 2002, as mentioned earlier, and has never looked back. Since then, his height of popularity has risen over the years. Now, let's briefly look at his acting projects and earnings in the following subheading.

The dedicated acting figure has around 21 acting credits under his name. In 2004, Tyler made his on-screen debut appearing in the series Unfabulous on Nickelodeon. Blackburn then played the role of a teacher in the short project The Doers of Coming Deeds in the following year. He appeared in the movie Next of Kin in 2008 and starred in Cold Case and Josh Schwartz's web series Rockville CA in 2009. Similarly, Tyler made guest appearances on Gigantic, Days of Our Lives, and Peach Plum Pear in 2010 and 2011, respectively. 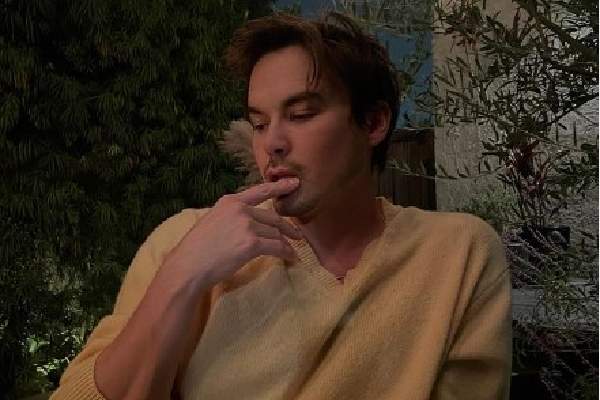 Furthermore, Tyler has also been featured in several films, such as Hello Again and Love Is All You Need?, and short movies, such as The Tudor Tutor and You & Me. His TV movie credits include Capsized: Blood in the Water and Brave New World. His acting projects have also benefitted financially, with his starred film, Hello Again, collecting a total box office collection of $530,831.

Having acted in multiple commercially successful projects, the television personality must have received his fair share. Although his earnings from his acting ventures have yet to be revealed, the average base salary of an American actor is $59,852; as such, Tyler must also be earning a significant amount. Hence, we can assume that Tyler Blackburn's net worth is a considerable sum.

Apart from acting, Mr. Blackburn also earns from his musical projects and modeling gigs. The Burbank native recorded Golden State's track Save Me to be used as Alloy Entertainment web series Wendy's theme song, in which he also starred in. The track was released worldwide on August 15, 2011.

Likewise, for the ABC Family TV program, The Secret Life of the American Teenager, Blackburn recorded Find a Way in 2012. The song played while Tyler was starring in Pretty Little Liars. In addition, he has collaborated with NOVI to record several songs, including Can't Love Me, which was played in the 12th episode of Roswell, New Mexico. He has also released an EP, Find A Way, which is available for $4.95 on Apple Music.

Besides, the Hollywood personality is equally active on his verified Instagram account with over 10.4 million followers. He has collaborated with Ayond, The Mighty Company, and Oliver Peoples, to name a few. In addition, the California native has also been featured in magazines, including Schon!, Imagista, and Seventeen.

As a result, Blackburn must profit from various collaborations and brand promotions. Considering his incredible musical ventures and modeling projects, we can expect Tyler Blackburn's net worth to be significant.

READ MORE: Issa Rae Net Worth - How Did She Amass Her Multi Million Fortune?

The multitalented personality has been leading a comfortable life, given the amount he has earned with his dedication and hard work over the years. Additionally, going through his Instagram, the Hollywood heartthrob seems to enjoy traveling with his close-knit people and friends. We can tell he enjoys going out and looking good.

Also, in real life, the musician is equally close with his co-stars of Roswell, New Mexico, including Jeanine Mason and Michael Vlamis.

Besides, the actor owns a 1,579-square-foot bungalow in LA, which he purchased for $965,000 in 2015. It is a three-bed, two-bath charmer property in the Atwater Village neighborhood of Los Feliz, built in 1922. Furthermore, as per 21 Motoring, the Pretty Little Liars star owns a BMW i8 Coupe, Mercedes-Benz GLC Class, and a Jeep Wrangler. With his hard-earned fortune, Blackburn surely is living a lavish life.

Nonetheless, Tyler is still active in his career and is succeeding in his career. So, Tyler's riches are likely to increase in the coming days, and he is on the way to becoming a multi-millionaire. Hopefully, Blackburn will continue achieving more success as an actor and singer, and we wish him all the best in his future endeavors.