Michael Vlamis never imagined himself as an actor; thus, even after making his on-screen debut in 2009, he did not chase acting as a career. However, you cannot talk about Roswell, New Mexico, without addressing Michael, who plays Micahel Guerin in the show. He has always enjoyed portraying the underdog characters and was inspired by Matt Damon in Good Will Hunting and Sylvester Stallone in Rocky.

The actor has since expanded his horizon beyond acting and has even penned a few scripts. Since there are several interesting facts about Michael Vlamis to unveil, stay with us till the end of this short biography, as this is your opportunity to discover more about the performer.

Is A Family Guy

The prolific actor was born on 27th March 1990 in Chicago, Illinois, USA. He was welcomed into this world by his dad, Mike Vlamis, and his mom, Denise Vlamis. Michael Vlamis' father studied at the University of Illinois Chicago and currently works at Guaranteed Rate. Michael is exceptionally close to his parents and often takes down his social media handles to express his love and gratitude toward them.

Furthermore, Mr. Vlamis is also a loving brother to two sisters, Stephanie Vlamis and Kelsey Vlamis. The three siblings have grown up now and are leading their individual lives.

Besides, regarding the actor's educational qualification, he attended Chapman University in California and earned a Bachelor of Science degree in entrepreneurship. Who would have imagined that a business student would slowly transform himself into a spectacular actor?

Michael Vlamis Net Worth And Career

Michael initially started his career in marketing for Modify Watches. He made his television series debut in a New Girl episode and began performing in short films. Some of his short movies include One Good Apple, Chocolatits, Knitting Needle Nightstalker 7, Google Me, Boner Police: The Movie, Two Close, and Gentleman's Game, to name a few.

However, the Chicago native gained worldwide recognition after he featured as Michael Guerin in 2019 in the CW's Roswell, New Mexico. In addition to acting, his film MemE! True Hollywood Story, which he produced, wrote, and starred in, won the Tribeca Film Festival (2016). Michael's first feature film, 5 Years Apart, which he starred in and produced, received Best Ensemble Cast at the LA Indie Film Festival in 2019.

Not just that, he is also a talented writer, and his script, Blue Slide Park, made headlines when it was placed on the Black List (2019). Furthermore, in 2022, Vlamis made his feature directorial debut with a psychological thriller, Crossword, which he also produced, wrote, and acted in. The film was received by Kenan Thompson's company, Artists For Artists, for handling sales.

Since the actor has been featured in several short movies and TV series, he must have earned substantially throughout these years from those projects. Apart from this, the Chicago native has also released his merchandise. Some of his products, alongside the prices, are mentioned in the table below:

The artist must also be earning well from his merch sales, and we believe he is leading a comfortable lifestyle from his well-earned fortune. Hence, we can deduce that Michael Vlamis' net worth is pretty enormous

Because Love Is Love

Does a human being win when they have a loving and supportive partner or when their work and love life are equally balanced? Well, for Vlamis, it seems that he has both sides of a coin and is successful and lucky in both his personal and professional life.

The Roswell, New Mexico actor is happily in love with his girlfriend, Aurora Perrineau. The duo has been together for around two years, and surely, their relationship has a long way to go and conquer every fear. Michael first posted a photo of them together in July 2020, and in another post, he mentioned that they officially started dating in March 2020. 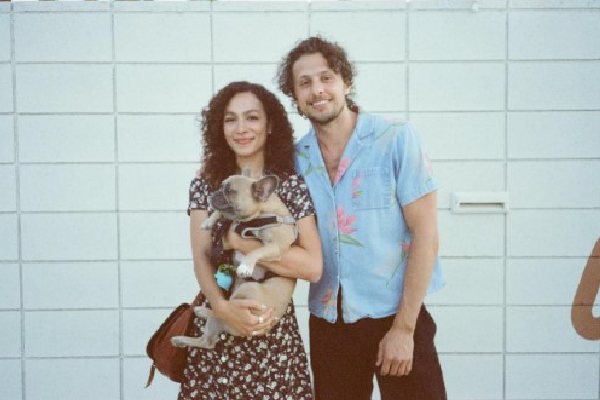 Moreover, Michael Vlamis' girlfriend, Aurora, is an American actress and model with around 22 acting credits under her name, as per IMDb. She is widely recognized for portraying Shana Elmsford in Jem and the Holograms (2015) and Detective Dani Powell in Prodigal Son.

Since the pair both belong to the same professional background, there must have been an ease of understanding between them. Nonetheless, Aurora and Michael have a solid and beautiful relationship, and we hope we will get to hear the good news of their marriage in the coming days.

Overall, the multitalented actor is working hard with complete dedication and passion for making his name known far and wide throughout the globe. Michael is an incredible artist who deserves the best in his life. He seems focused on several acting projects, and we wish him the best in his future endeavors.