Actors at their foundation are storytellers. Art, performance, and acting are expressions of our cultures, love, worries, strengths, existential curiosity, and shortcomings. Since actors have a significant impact on our lives, they often hold a special place in our hearts. Similarly, in today's article, we will talk about yet another established actor who is charming, hardworking, and dedicated.

Kevin Interdonato is an American actor who started his professional career on the East Coast. He is known for his work on the rising Indie film scenario in NYC, NJ, and Philadelphia. Since there are several inspiring things about him to discover, stick with us till the end of this short biography, as we will cover details of Interdonato, including his personal and professional life.

Comes From A Well-To-Do Family

The multitalented actor was born on April 5, 1979, in Howell, New Jersey, USA. Kevin was brought up in NJ in a hard-working, blue-collar family. While Kevin Interdonato's father, Dennis Interdonato, owns a construction business, his mother, Janet Interdonato, is a preschool teacher. The handsome guy is equally close to both of his parents.

Furthermore, Kevin also has an elder brother, Dennis Interdonato, who was previously a Drill Sergeant in the Army. The siblings together have also served in the same Army National Guard unit in Toms River, NJ.

Talking about his educational background, in 1997, Kevin graduated from Howell High School. A few years later, the actor attended Brookdale Community College after completing basic Army National Guard training at 19. He participated in various sports throughout his childhood and high school years.

Kevin Interdonato Net Worth And Career

Kevin's short leave from the business to fulfill his military duties led him to a tour of duty in Baghdad, Iraq, in 2004-05. He is a combat veteran of the Iraqi War (OIF II). There, Interdonato was assigned to the 759 Military Police and the 1st Cavalry, 1st Brigade Combat Team.

Kevin returned to the entertainment sector after contemplating his departure from the industry. His subsequent work on the Indie Film scene earned him recognition at the 2008 Garden State Film Festival, where he received the "Robert Pastorelli Rising Star Award."

Furthermore, Interdonato's continuous work in comedic and dramatic roles earned him praise at several film festivals across the United States. Additionally, he was named "The New Badass of Indie Film" by IFQ magazine for featuring as Nazo in Blue Collar Boys, an award-winning feature film.

The Howell native has over 50 acting credits under his name, and he made his on-screen debut with the movie Never Among Friends in 2002. During his acting career, Kevin has been featured in numerous TV series and movies. Some of his TV series include The Sopranos, Law & Order, CSI: NY, Geo's Pizza, How to Get Away with Murder, Rush Hour, Return Home, Pose, New Amsterdam, and City on a Hill, to name a few.

Similarly, Kevin's spectacular movie projects include Decrypted, Team Marco, False Witness, Bad Frank, The Gods, Turbulence, Blue Collar Boys, The City is Mine, and Leeds Point. Nonetheless, since Mr. Interdonato has equally featured in both movies and series, he must have made substantial earnings from those projects.

Hence, we can deduce that Kevin Interdonato's net worth is pretty significant. Besides, an American actor, on average, earns $59,725 annually. We hope the Hollywood personality leads a comfortable lifestyle with his hard-earned wealth.

Is A Proud And Supportive Husband

When we read about successful, passionate love stories, it seems lovely and cute; nevertheless, most of us fail to realize that behind every successful relationship is a lot of forgiveness, love, patience, and loyalty involved. It's easier to hear and adore these love stories, but being a part of one comes with responsibilities. Similarly, the incredible actor also shares a happy romantic relationship with his loving spouse, Amanda Clayton.

Not just that, he is also one heck of a supportive husband who constantly pushes his wife and is proud of her achievements. Kevin proposed to Amanda in August 2014, after they had been together for several years. A year later, in October 2015, the couple married. 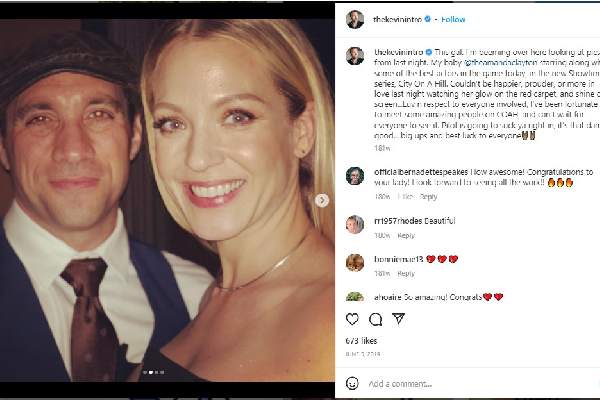 Furthermore, Kevin Interdonato's wife, Amanda, is an American actress who made her cinematic debut in 2006. She is widely known for portraying Alex Montgomery in If Loving You Is Wrong, an Oprah Winfrey Network series. Likewise, Amanda has around 24 acting credits and is a name recognized in the entertainment industry.

Nonetheless, the husband-wife duo is enjoying a long-term and prosperous marriage, and we hope their love will endure every hardship in life.

Father To An Adorable Daughter

Being a parent of an adorable child with the love of your life is definitely a beautiful dream, and it seems to be a reality to Kevin. He and his beloved wife, Amanda, welcomed a beautiful baby girl in December 2019.

Besides, Kevin and his partner have yet to reveal their kid's name but going through the duo's social media posts, we can see that the family of three lives a happy and beautiful life. Also, they seem to always shower unconditional love and attention on their little girl. Nonetheless, Kevin Interdonato's daughter is still young, and it will be interesting to see if she follows in his footsteps.

In essence, the Turbulence actor has an established professional career and personal life. Amanda Clayton's husband has been working extremely hard in the entertainment sector for many years and is very true to his roots and passion. We hope he gets the opportunity to be featured in high-budget movies in the future.