Amanda Clayton is widely recognized for her performance in the drama series, If Loving You Is Wrong. Image Source: Amanda Clayton Instagram.

Amanda Clayton has always enjoyed performing and is currently living every actor's dream. Amanda made her cinematic debut in 2006 and played several minor roles until getting her big break in 2014 as Alex Montgomery in the Oprah Winfrey Network series If Loving You Is Wrong.

Even though her character wasn't always likable on the show, she did an excellent job portraying Alex. When the series wrapped in 2020, Amanda continued her career as Cathy Ryan in City on a Hill. The show brought her and her ability to a broader audience than ever before, and she has gained many loyal fans. Hence, in today's short biography, we will talk about her personal life, professional career, and how she has become accomplished.

Is Extremely Close To Her Sisters

The talented actress was born on October 24, 1981, in Johnston, Rhode Island, U.S. She was welcomed into this world by her mother, Bonnie Clayton, and her father. Amanda is exceptionally close to her parents and frequently posts pictures with her mom on her social media handles.

In addition, the gorgeous lady is also a great and loving sister to Randi Clayton and Krista Clayton. The three siblings are incredibly close to each other and constantly support one another. 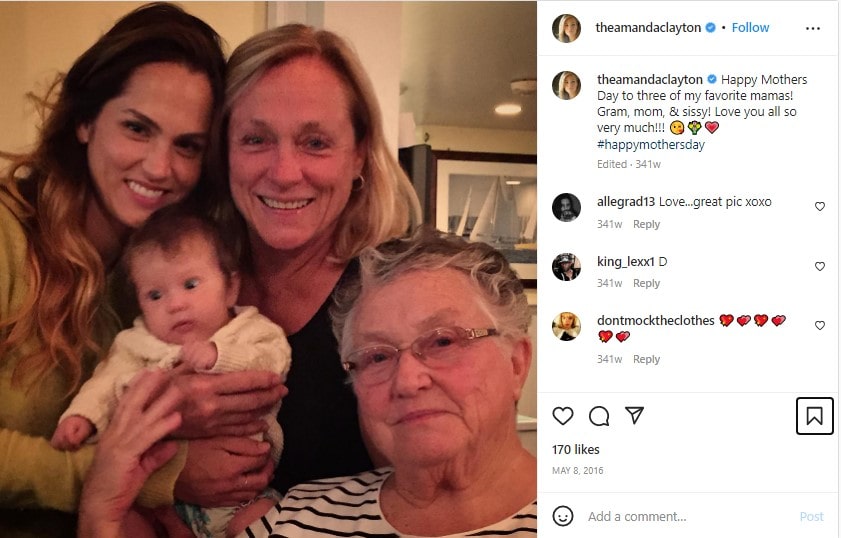 Likewise, talking about the actress' educational background, she attended the University of Rhode Island and, in 2005, shifted to New York City to study at New York Conservatory for Dramatic Arts. Her strong passion and love for acting must have drawn her toward art school.

Amanda Clayton Net Worth And Career

Amanda's earnings as an actress is primarily derived from the acting endeavors she has been a part of. As a result, Amanda Clayton's net worth is believed to be quite substantial.

The blonde beauty has around 24 acting credits under her name, and, in 2006, she made her film debut as a supporting actress in the independent film December Ends. Furthermore, Clayton was cast as Sarah Carter in the Disney adventure film John Carter in 2012. She later appeared as a guest star on The Mentalist and Rizzoli & Isles.

In 2014, Amanda was cast as one of the leads alongside Edwina Findley, Zulay Henao, Heather Hemmens, and April Parker Jones in the Oprah Winfrey Network prime-time soap opera If Loving You Is Wrong. Her performance in the series caught the attention of many viewers, and she gained enormous recognition.

Later that year, the Johnston native was cast in the biographical drama Bleed For This, starring alongside Katey Sagal and Miles Teller. In addition to Bleed For This, Clayton played the female protagonist in two other feature-length films, The Bet and Bad Frank.

Moreover, Amanda also starred in the Lifetime Movie Cradle Swapping in 2017 and Mommy's Little Angel the following year. Fans can now watch Clayton in the Showtime drama series City on a Hill. Besides, the Johnston native has equally featured in both series and movies, hence, has also made good earnings from those projects. Now, let's see some of Amanda's films and their total earnings.

Overall, having featured in such commercially successful projects, the If Loving You Is Wrong star must have earned significantly. Besides, the average salary of an American actress is $97,101 annually. Ms. Clayton must have also received multiple endorsement deals from other brands, which would have greatly benefited her. Regardless, Amanda must be leading a comfortable lifestyle with her hard-earned money.

Has A Loving Husband

Maybe home isn't always a place; it's a person, they say, and Amanda couldn't have had it any other way. Well, she has already found a homely feeling in one guy. The Bad Frank actress and her partner, Kevin Interdonato, have a happy, healthy, and prosperous relationship.

The adorable pair have been together for over seven years, and Amanda's partner proposed to her in August 2014. A year later, the pair tied the wedding knot in October 2015. Besides, the driving force behind the lovebirds' successful and long-term relationship must be compatibility, chemistry, and understanding between each other.

Furthermore, Amanda Clayton's husband, Kevin, is an American actor who began his career on the East Coast. He is widely known for his performance on the rising Indie film scene in NYC, NJ, and Philadelphia. In addition, Kevin has also served in the Iraqi War (OIF II) in Baghdad, Iraq, from 2004 to 2005. He was assigned to the 759 Military Police and 1st Brigade Combat Team, 1st Cavalry.

Nonetheless, the husband-wife duo shares an enduring and thriving marriage, and we hope their love will stand the test of time.

Loving Mother To One

Although Amanda's character in If Loving You Is Wrong may have had a tumultuous home life, she is fortunate to say that this is not her reality. With the love of her life, Kevin Interdonato, she welcomed a beautiful daughter in December 2019.

Besides, Amanda and her hubby show unconditional love and affection to their little girl. We can see from the couple's social media posts that the family of three lives a happy and comfortable life. Nevertheless, Amanda Clayton's daughter is still young, and it will be interesting to see if she will follow in her footsteps in the future.

Overall, we can see that the Hollywood personality has a highly successful professional career and a secure personal life. We hope she continues to act on-screen and charms us all with her amazing acting abilities. Our best wishes and luck are with her.