Marie Ulven, a Norwegian singer-songwriter and producer, popularly known as Girl in Red, recently claimed that the lack of bisexual performers in mainstream music deprives young LGBT+ people of role models. Over the years, young lesbians and bisexual women worldwide have dubbed her a cult figure.

Ulven claims that the Covid-19 epidemic has impacted her mental health. This, in addition to the recording of her album, has caused her to use social media less. So, what happened, and what are the updates? Why has she been dubbed a cult figure by young LGBT+ people? Keep reading to find out.

In a telephone interview with the Thomson Reuters Foundation, Marie admitted that she had not anticipated that her intense, guitar-driven tracks would end up becoming anthems to young LGBT+ people. The singer further claimed that there is not enough queer portrayal in pop culture and that, as a child, she could not find many bisexual artists.

She acknowledged that her music remarkably impacted LGBT+ people. However, the European musician also showed her wish that her sexual orientation was not an issue among listeners. When talking about LGBT+ artists who had impacted her, Ulven claimed that the 2015 song Girls Like Girls by American pop star Hayley Kiyoko had been a pivotal moment for her realization of her identity.

The Girl in Red remarked that many bisexual people start hiding queer talents due to the lack of queer presence. Her interview has motivated hundreds of bisexual people and portrayed her as a cult figure among them.

Marie Ulven As A Cult Figure

As mentioned earlier, Marie Ulven, a Norwegian indie pop singer-songwriter, has become a cult personality among bisexual people, but she wishes her sexual orientation was not a concern for her audience. On social media platforms like TikTok, where the Norwegian singer has more than a million followers, asking 'Do you listen to a girl in red?' has become a means for young LGBT+ women to bond. Ulven, who identified as gay at first, now prefers the term queer. This was once frequently used as an insult but is now more frequently used by LGBT+ persons to identify themselves.

Ulven claimed that although many people refer to her as a lesbian, the word is one of her least favorites. She addressed the current debates surrounding transgender rights and stated her appreciation for non-binary and trans people who do not identify as either male or female. Marie has claimed that she has never experienced any pressure to dress more traditionally feminine or to apply makeup.

Besides, the young singer presently resides in Grünerløkka, Oslo. In 2021, she disclosed that she had been given a generalized anxiety disorder and obsessive-compulsive disorder diagnosis.

Similar to Ulven, Carly Ritter is another aspiring singer who is earning name and fame through her musical talent. Furthermore, she is the daughter of popular actor John Ritter.

About The Queer Singer

Marie Ulven Ringheim, popularly known as Marie Ulven, was born on February 16, 1999, in Horten, Norway. She is known for her indie pop project, Girl in Red. Ringheim recorded her early EPs, Chapter 1 (2018) and Chapter 2 (2019), in her bedroom. They include tracks on love and mental well-being. Her first studio album, If I Could Make It Go Quiet (2021), which was distributed by AWAL, was a critical and commercial triumph. It took home three Norwegian Grammy Awards, notably Album of the Year. 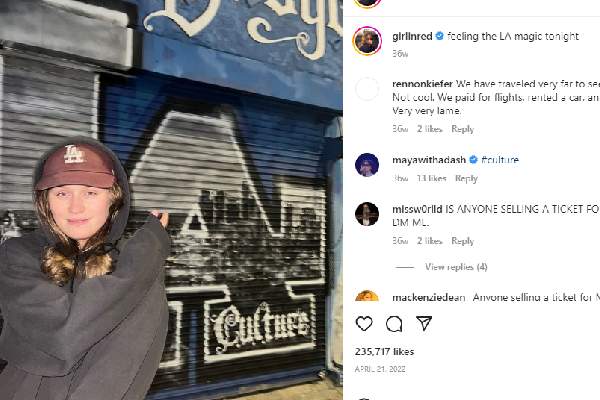 The New York Times and Papermag have both referred to Girl in Red as one of the most insightful and exciting musicians in the field of guitar music. She is also referred to as a queer icon. Ulven's singles I Wanna Be Your Girlfriend (2017) and We Fell in Love in October (2018) received gold certification in the US in January 2021. Did you know she opened for Clairo in September 2018 in Paris and Dublin?

We can only hope that the Norwegian artist continues to motivate more people and speaks more on queerness empowerment. Nevertheless, she must be living a great and happy life. We wish her the best of luck in her future endeavors.