Canadian Influencer Josh Richards' Dating Life - Does He Have Any Girlfriend?

Home Entertainment Canadian Influencer Josh Richards' Dating Life - Does He Have Any Girlfriend?.

Lately posting 15-second videos online may be the surest way to achieve Internet fame. At least, that worked for the TikTok sensation Josh Richards. The young social media influencer first started gaining attention in musical.ly before it became TikTok, where Josh's fan following has doubled. Aside from that, he is the founder of a full-service production company, CrossCheck Studios.

Since he has achieved much fame and recognition at such a young age, many fans have shown keen interest in Richards' personal affairs, especially his dating life. Hence, this article covers all the essential information regarding the Canadian influencer Josh Richards' girlfriend and romantic relationships.

To be famous on TikTok, one has to post more content, bring out their unique skills, use trending hashtags, be regularly active, and more. While a person's skills do play an important factor, it's the truth that good looks are equally needed. Richards doesn't lack in either of those, and his millions of followers are evidence of his popularity on social media.

Since he is one of the handsome TikTok stars, many fans must be curious about the Ontario native's partner. Well, he has been linked with multiple ladies, however, the known-beau of Josh is fellow TikToker Nessa Barrett. The latter is recognized for her dancing and lip-sync videos on the platform.

The former pair began their on-off relationship in October 2019. The lovebirds were even living together back in 2020. However, not every relationship is meant to last forever. Likewise, Nessa and Josh's dating period came to an end in June 2020. Both announced their break up in a YouTube video, where Richards shared they were still friends and there for each other.

Richards' break-up with Barrett wasn't without drama. The former couple lived together with Mads Lewis and Jaden Hossler, who were also a pair. After her separation from him, Josh Richards' ex-girlfriend collaborated on a song La Di Die with Jaden in February 2021. Nessa and Jaden sparked a dating rumor which was further fueled by the latter's break-up with Mads a month later.

Barrett got the end of the stick as she was called homewrecker, among other degrading names on the Internet. Explaining the whole drama with Lewis and Hossler, Josh revealed he and his former beau didn't separate due to alleged hooking up rumors between Nessa and Jaden. He further clarified Mads tried to make something out of nothing by putting assumptions together.

The former duo sparked speculations about getting back together in August 2022. But it seems like those are just rumors, as it's not clear whether the two have any reconciliation plans.

Josh Is Famous Among Ladies

With his mesmerizing blue eyes, handsome features, and tall height, Joshua Richards has been winning many ladies' hearts. Add the facts that he is multilingual, passionate about sports, and a total gentleman, he is surely a catch. Hence, even celebs love this Canadian social media star.

Since he is famous among ladies, it's no surprise to see Joshua being linked with some of them. Also, given that he often does collaborations with his female friends, many speculate him to be seeing that particular individual. For instance, many assumed Josh was dating UF grad Julie Jisa after making a video with her. 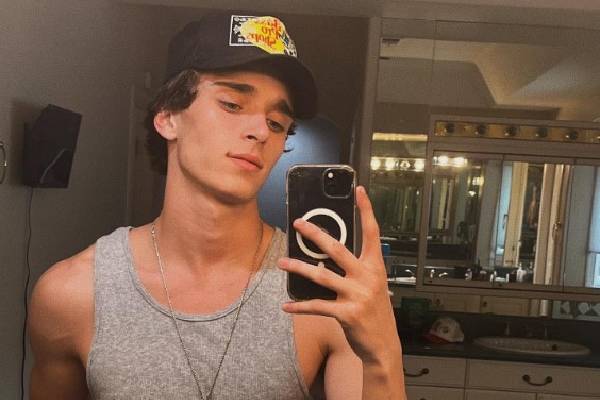 Josh Richards has been linked with multiple ladies with whom he has made TikTok videos. Photo Source: Josh Richards' Instagram.

However, the CrossCheck Studios CEO confirmed he wasn't in a relationship with Jisa in an interview with Seventeen. Besides, there have been several other assumptions about this handsome lad, which are also likely false.

Who Is Josh Richards' Girlfriend Now?

Having talked about the Canadian influencer's ex-partner, break-up drama, and relationship rumors, it's now time to get to the main issue, i.e., who Josh is currently seeing. Although he hardly speaks about his love life, Richards shared a bit about how he was hanging with a girl named Mia Mastrov in the BFFs Podcast in May 2022.

Richards and Mia gained attention after uploading several TikTok videos together over Stagecoach weekend. In the aforementioned podcast, Josh revealed Mia is pretty cool. When asked if he was thinking about dating the girl, the TikToker disclosed he was unsure. So, has Mia become Josh Richards' girlfriend now?

Unfortunately, the CrossCheck Studios founder has yet to reveal who his current partner is. Though he often posts pictures with his friends, he has yet to share any with his possible romantic interest. Maybe after all the drama with his ex-girlfriend and many relationship rumors, he is thinking of keeping his dating life low-key. It won't be surprising, considering how the netizens are seen constantly harassing celebs' partners online.

All in all, Richards hasn't shared whether he is single or taken. Hopefully, we will get to know about the social media star's partner in the coming days.