There are TikTok stars, and then there is Josh Richards. He is just in his early 20s and has already turned himself into a brand and built a social media empire that most people can only dream of in their teenage years. On Tiktok, he currently has over 25 million followers and around 1.9 billion likes. His Instagram presence is also impressive, with 6.7 million followers.

Furthermore, the social media sensation is also well-known for his lip-syncing and dancing videos, and his good looks don't hurt either. With such a large Internet presence, it will be intriguing to see how much Josh earns from all these platforms. Therefore, let's look further into Josh Richard's net worth and earnings in the following article.

Loren Gray Net Worth - How Much Does She Earn From Her Social Media Ventures?

Josh Richards Net Worth And Earnings

Josh was born Joshua Kenneth Richards on 31st January 2002, in Toronto, Canada. Although he was brought up in Canada, he currently lives in Los Angeles. Josh has two younger siblings, and he comes from a very supportive and loving household. Since the social media star had a pleasant childhood, it must also have helped him gain confidence in his professional career.

At the young age of 13, Richards founded his first company, Berserk Hockey which is a hockey merchandise firm. Similarly, he started his influencer journey at 14 on musical.ly, which is now TikTok, and signed up with a manager in 2017. As a high school freshman, Joshua posted lip-sync videos and rapidly rose to become one of the app's most popular users. In 2018, he had his first brand collaboration with the shoe company, 'Call It Spring.' 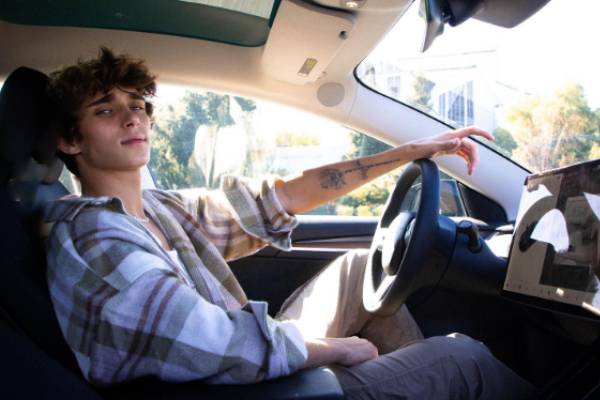 Besides, in 2018, Richards was a VIP guest at the Rock Your Hair Tour event in Toronto. Now, the Ontario native has an immense following on his social media handles, through which he must be earning pretty well. Although the exact amount of Josh Richard's net worth has not been revealed yet, there is no doubt he is busy cashing out dollars of money. Now, let's go over his earnings from social media and other sources in greater depth.

Ever since Joshua was a child, he liked to entertain people and had aspirations of becoming an actor. So he began uploading content to social media in 2010, and it didn't take long for him to build an audience. His first TikTok post was in March 2017, and as of November 2022, the Toronto native has gathered over 25.8 million followers and 1.9 billion likes.

Moreover, according to Forbes, the handsome lad was the fourth highest-paid Tiktok star in 2022. Similarly, Josh earned $1.5 million between the summers of 2019 and 2020, making him the fifth highest-paid TikToker in 2020.

Additionally, top Tiktok stars can earn up to $500,000 every single post, according to Forbes, with the bulk earning between $100K to $250K per post. It's no surprise that Josh Richard's net worth primarily comes from his earnings from social media endeavors. Similarly, Mr. Richards also has his self-titled YouTube channel, which has over 2.25 million subscribers as of November 2022.

Moreover, the influencer also makes money through YouTube ad revenue. As per SocialBlade, Joshua's monthly estimated earnings fall between $422 to $6.8K, and his yearly earnings range from $5.1K to $81.1K, excluding brand-sponsored deals, for which he may charge up to $20K per video.

Besides, the Canadian personality is equally active on his verified Instagram account with over 6.7 million followers. He has collaborated with Patreon, and MCM Worldwide, to name a few.

As a result, Richards must profit from various brand promotions and collaborations. According to Sportskeeda, Josh could earn upwards of an estimated $22,000 for a sponsored brand post.

Josh's talents are not restricted to social media only; he is also a business-minded individual who has established himself in the business world. The influencer is the co-founder of TalentX Entertainment, a digital management company. Similarly, he also signed a recording contract with Warner Records and was the first artist who signed with TalentX/Warner Records in July 2020.

Furthermore, Joshua is also an investor who involved himself in a $15 million venture capital fund. He formerly worked as Triller's chief strategy officer. In addition, he is the co-founder of the energy drink Ani Energy, which is now sold in supermarket chains like Walmart and Target, and production company CrossCheck Studios. Additionally, he and his production firm just signed a first-look contract with Amazon.

Besides, the Ontario native has also co-founded Sway House, a social media collective, and VC firm Animal Capital, which has $17 million in funding and is now collecting a $40 million round. Josh also co-hosts Barstool podcast BFFs. with Barstool founder Dave Portnoy.

Overall, the social media sensation must have earned a significant amount from all these business endeavors. Richards earned an estimated $5 million in 2021 through his multiple sponsorship deals and business ventures, according to a Forbes study released in January 2022.

Not just that, the Canadian star also serves as an advisor for brands like Unhide, FCF, aka Fan Controlled Football, Versus Game, and Pear Pop Official.

Income From Other Sources

The Toronto native has also accumulated a hefty sum from a few of his acting and composing projects. Josh has around four acting credits under his name and one composer credit. In 2020, he released a short music video featuring Bryce Hall, Still Softish.

Furthermore, Richards has also featured in the music video Canceled by Larray. On the other hand, his acting projects include Under the Stadium Lights, Summertime Dropouts, and King Chip tha Ripper: Don't You See I'm on the Phone?!. Overall, his involvement in the entertainment industry must also have benefited him greatly.

The TikTok sensation has been leading a comfortable life, given the amount he has earned with his innovative mindset and dedication over the years. Additionally, going through his Instagram, the influencer seems to enjoy traveling with his loved ones and friends. We can tell he enjoys looking good and going out.

Likewise, Mr. Richards has a white Mercedes van, which he has owned since 2020, as displayed in his videos and social media. Moreover, Richards relocated to Los Angeles from Toronto because of his success on TikTok. In Bel-Air, Los Angeles, he shared a home with Sway House residents.

The CrossCheck Studios CEO and his fellow TikTokers moved into the former Hype House location in Moorpark, California, in August 2021, which they bought for nearly $5 million, according to Insider. As per The Cinemaholic, the 11,293-square-foot estate is in a gated community and covers 20 acres.

Overall, Josh Richards' wealth and success are both rising. At such a young age, he has earned a substantial amount of fame and riches. Let's hope he keeps shining in the coming days and makes it to the billionaires' club as he has always dreamt about.

Not just that, to him, charity and giving back is equally important, and Josh considers himself extremely fortunate to have had the opportunity to give back to his community. He indeed has been able to make a difference and is undoubtedly continuing to contribute.