Pablo Escobar was also the founder and leader of the Medellin Cartel. Image Source: Socialmedia/lifeofpablo

Pablo Emilio Escobar Gaviria, notably known as Pablo Escobar, was a Colombian drug lord and one of the most wanted fugitives by the United States for charges against narcoterrorism. Escobar is the richest outlaw in history, thus labeled "The King of Cocaine" he was also referred to as El Patron or Don Pablo.

Pablo Escobar was also the founder of the Medellin Cartel and settled the first revolutionary drug trade network. The drug lord had an aim to become the president of Colombia, to raise the country out of poverty, but instead became an individual responsible for thousands of deaths, including the bombings of Avianca flight 203 and the DAS building. Let's learn more about the EL Patron, aka Pablo Escobar's family, and his infamous career.

In 1976 Pablo Escobar married Maria Victoria Henao in the Santisima Trinidad church in Palmira without their parent's attendance. Maria Henao was 15 years old at the time. She loved Pablo and remained by his side throughout his life despite his affairs and crimes. The couple had two children Juan Sebastian Marroquin Santos and Manuela Escobar. 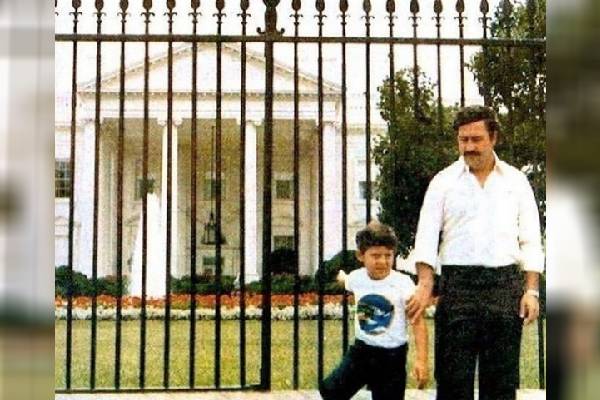 Pablo Escobar with his son Juan Pablo outside the White House in Washington. Image Source: Instagram/historicimagery.

The drug lord also had numerous affairs with many women. He was in a relationship with Wendy Chavarriaga for many years, who became a DEA informant after Escobar forced her for an abortion. Escobar's henchmen later executed her.

In 2007, Virginia Vallejo published Loving Pablo, Hating Escobar, which described her experiences with the Medellin Cartel and her relationship with Don Pablo.

Pablo Escobar's son Juan Pablo Escobar Henao was born on February 24, 1977. He fled Colombia with his mother and his sister Manuela to Argentina. He changed his name to Juan Sebastian Marroquin Santos after airlines declined to sell him tickets under the Escobar name.

Juan has a degree in architecture and lives in Palermo Soho, Buenos Aires, with his wife Maria Angeles Sarmiento and son Juan Emilio Escobar. He has appeared in a documentary called Sins of my father, where he met with the victims of his father's crimes and published a book in 2014 called Pablo Escobar, MY Father.

Juana Manuela Marroquin Santos was born on May 25, 1984. She was born in Colombia to father Pablo Escobar and mother Maria Victoria Henao. She miraculously survived a bomb attack on their home. Manuela was kept well off anyone reach after the incident as not much is known about the drug lord's daughter.

Pablo rose from street life to become one of the wealthiest people in the world. He flew out planes with tons of cocaine into the US. He bought cocaine paste in Peru and refined them in a laboratory in Medellin. Pablo would smuggle cocaine in old tires of planes, and the pilot could return as much as $500K per flight. As Pablo Escobar's empire grew, so did the demand for his cocaine. He would organize more shipments for smuggling and establish new routes and distribution networks in Florida, Puerto Rico, California, and other parts of the country. About 70-80 tons of cocaine were flown from Colombia to the United States every month.

By 1982, Pablo Escobar was elected as an alternate member of the Chamber of Representatives as part of the Liberal Alternative movement. He would take on community projects like building houses and football fields in towns across Medellin and Bogota, pursuing his dream to become the president of Colombia. However, he was disgracefully defamed by the Colombian authorities and the US government by releasing his mugshot to the public. As an act of revenge, Pablo ordered a government official's assassination and is believed to be responsible for the bombings in the DAS building and Avianca Flight 203.

In 1985 he was held directly responsible by various media for the 1985 storming of the Supreme Court by left-wing guerrillas, also known as M-19. They were paid to burn all the papers and files on a group of cocaine smugglers who were being extradited to the US by the Colombian government.

Pablo Escobar surrendered to the government in exchange for a reduced sentence after the extradition had been prohibited by the new Colombian Constitution of 1991. Pablo Escobar was sentenced to his own luxurious prison called La Catedral, which has its football pitch, giant dollhouse, bar, and many other facilities. 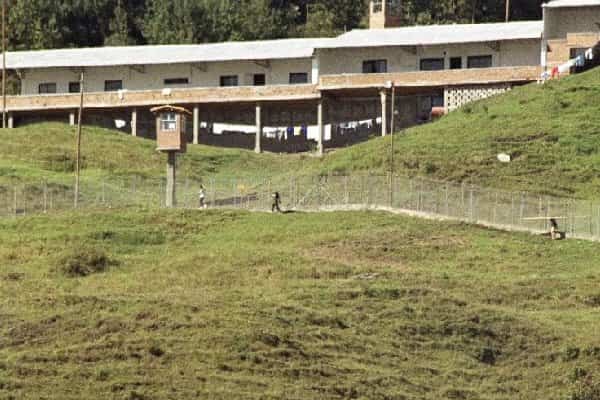 Pablo Escobar was sentenced to his own luxurious prison called La Catedral, which has its football pitch, giant dollhouse, bar, and many other facilities. Image Source: Wikimedia Commons.

However, he was ordered to move into an ordinary jail by the government in 1992 after Escobar killed two people inside the prison. He was able to escape from La Catedral and went into exile.

The Medellin cartel dominated the cocaine trade throughout the mid-1980s, even when Pablo was behind bars. In his prime time, the cartel brought in more than $420 million a week.

Pablo Escobar had a net worth of $25 billion. His colossal fortune was hidden inside the walls of houses and even buried underground. He spent over $3k per month on rubber bands to wrap the stacks of money he owned, and 10% of his earnings had to be written off every year due to rats and water breaches that had deteriorated the cash. 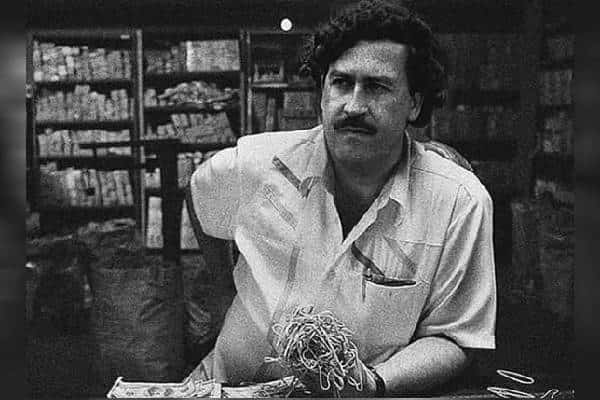 Pablo Escobar had a net worth of $25 billion. Image Source: Instagram/affulentluxuryclub.

Pablo owned many real-estates inside and outside Colombia, but the drug lord's love for his country couldn't make him run away anywhere else in the world.

Escobars most beloved house where he spent his days with his family was called the Hacienda Napoles. The luxury house had a complete zoo with animals from around the world, including giraffes and exotic birds. He also owned properties in the US in Miami Beach, Florida, not to mention his own island with a mansion, apartments, swimming pool, a helipad, and unfinished projects to the side of the villa. The island is now half-demolished and has been overtaken by wilderness.

A year and three months after his escape from La Catedral, Pablo Escobar was killed in a shootout after trying to escape the police with his bodyguards in Medellin. However, the exact reasons for his death are still uncertain.

Pablo's brothers believe he shot himself and was not killed by the police. On December 2, 1993, Pablo Escobar died a day after his birthday, where the drug lord enjoyed his last piece of cake with wine and marijuana.

Over 25,000 people attended the El Patron's funeral. Escobar had helped to impoverished communities around him and was known as the Robin Hood by his people.