Music has no language, and it connects people throughout the world. It spreads love and a sense of peace among many people. While music is an important aspect of our life, so are the people who create them.

Likewise, in today's article, we will talk about Jason Evigan, an American musician, songwriter, singer, and record producer. He has worked with several renowned recording artists, including Maroon 5, Demi Lovato, Kelly Clarkson, Madonna, Avicii, and Nick Jonas. Now, without further ado, let's jump straight to this short biography dedicated to the songwriter and get to learn some amazing facts about him.

His Sisters Are Actresses

The talented musician was born Jason Gregory Evigan on June 10, 1983, in Los Angeles, California, United States. He was welcomed into this world by his mother, Pamela C. Serpe, and his father, Greg Evigan. His dad is a well-known American stage, film, and television actor who got his start in the performing arts by making his Broadway debut in Jesus Christ Superstar.

Similarly, Jason Evigan's mother is an actress, model, and dancer. He grew up in a very understanding and inspiring family. Jason is a fantastic son to his parents and a loving brother to two sisters, Briana Evigan and Vanessa Evigan. Both of his siblings are actresses, and they have made their names known far and wide around the globe. They are incredibly close, and we hope their bond will grow fonder.

Besides, talking about the musician's educational background, he attended Moorpark College. However, it is yet to be revealed which degree he pursued.

Jason Evigan Net Worth And Career

Before beginning his career as a producer and writer, the California native was the lead singer of the Los Angeles-based band After Midnight Project. The band also released four EPs and one album. They took part in the Warped Tour and shared the stage alongside artists, Red Jumpsuit Apparatus, Chevelle, Papa Roach, 10 years, Thirty Seconds to Mars, and Story of the Year.

Aside from that, Evigan is a songwriter, and his songwriting credits include production and co-writing of Maroon 5's Girls Like You and What Lovers Do, Demi Lovato's Heart Attack, Madonna's Ghosttown, David Guetta's Lovers On The Sun, Jason Derulo's Talk Dirty, and Robin Schulz's Shed a Light.

Moreover, Jason is a member of the production team 'The Suspex' alongside fellow producer and writer Mitch Allan. The duo has penned numerous successful songs, including Lovato's Heart Attack. Additionally, Evigan attributes his entry into pop songwriting to Mio Vukovic, a Disney A&R executive, who introduced him to Demi. He later contributed four songs to Lovato's album, Demi, and two to Gomez's Stars Dance.

The Los Angeles native agreed to a contract with Sony/ATV Music Publishing in 2020. Overall, since the musician has many music projects to his resume, we can expect Jason Evigan's net worth to be notable. Also, a musician makes around $42,563 annually in the United States. Hence, Jason's earnings must also be around that range.

Meant For Each Other

Love and marriage can both be beautiful if two individuals involved in it are patient, honest, giving, and willing to make some compromises. To make a relationship successful, both parties should take it as a responsibility and strive every day for it to work.

Similarly, Jason and his beautiful spouse, Victoria Janzen, also work dedicatedly to make their marriage last a lifetime. The power couple exchanged their wedding vows on August 27, 2011, and they have been together ever since. Furthermore, Jason Evigan's wife is a colorist and the founder of Picture This, a non-profit connecting hearts across the globe. 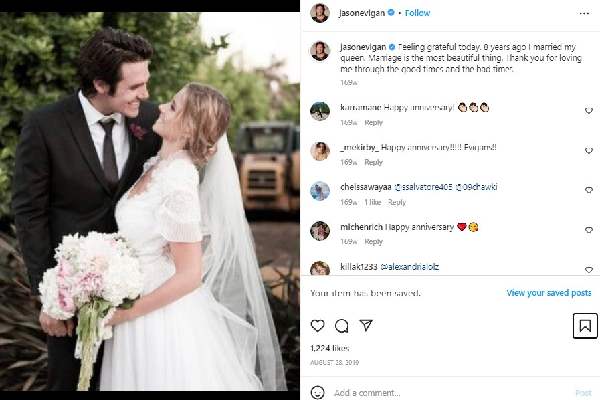 Besides, Victoria is a loving and supportive partner who constantly pushes the musician to give his best shot in everything. The lovebirds have started the electronic collective, Elephant Heart, whose releases are designed to create awareness and involvement toward social betterment. Nonetheless, the duo's marriage is based on the foundation of trust, loyalty, and faith, and we hope they will stick around each other forever.

Jason Is A Great Father

After being together for several years, the Evigan pair welcomed an adorable baby boy named Jasper Evigan on March 2, 2021. Not just a loving partner, but the songwriter is equally a great dad who loves his child with no limits.

In addition, Jason and Victoria show unconditional love and care for their only kid. Going through the duo's social media posts, we can tell that the family of three is living a comfortable and content life. Nonetheless, Jason Evigan's son is still young, and it will be exciting to see if he will follow in his footsteps in the future.

Overall, Jason is a musical personality who curates beautiful music for everyone. He is a talented artist who has worked in the industry for over a decade. But we believe this is just the beginning for Evigan, and he has a long way to go. For now, we wish him luck and all the best for his future projects.