To some, Miles Adcox is a great son, to some, a loving husband, and to some, a devoted father. A cowboy at heart, he is, most importantly, an avid believer in the astonishing power of emotional freedom and its unparalleled ability to transform lives positively.

Miles is a multitalented individual; he is a speaker, an entrepreneur, a coach, and a podcaster. Yet, there is so much more to him than what people know. Therefore, we are bringing out his short biography, which covers essential details about his personality, including his personal life and professional career.

His Parents Have Been Together For Over Five Decades

Miles was born on August 1982 to David Adcox and Connie Adcox. His parents have been together for over five decades and share an enduring and thriving marriage. Adcox was born and brought up in the United States and, in his own words, grew up in an emotionally illiterate culture and system that left him without language to describe his feelings. Moreover, at the early age of thirteen, he was prematurely exposed to alcohol and sex.

Still, Miles was blessed to have supportive parents and a loving brother and sister. He wanted to find his authentic self since childhood, which led him to his current line of work.

Talking about the speaker's educational background, he attended the University of Tennessee at Martin and studied business, management, marketing, and related support services.

Miles Adcox Net Worth And Career

As mentioned earlier, Miles is a multitalented personality who has hands-on experience in different fields. He is the CEO and proprietor of Onsite Workshops. It is a mental health service dedicated to changing lives through enhanced emotional health based in Cumberland Furnace, Tennessee. Miles is also the proprietor of The Oaks Center, a custom corporate workshop located in Ramona, California.

Furthermore, Adcox is a podcaster who began his podcast career in 2018. He initially co-hosted 'Unspoken' podcast with Ruthie Lindsey. In 2021, he became co-host of The Living Centered podcast alongside Lindsey Nobles and Mickenzie Vought. They sit with different mental health experts, friends, and artists for an honest and practical conversation about pursuing a more centered life. Currently, the speaker is working on a solo podcast debuting in 2022 entitled 'Human School.'

Moreover, Miles has been a featured guest on stages and in the media for more than ten years. He spreads themes of healing, atonement, and grace through everything from speaking engagements at conferences to television appearances. Some of his tv appearances include The Daily Helpine, 320 Festival Live, and a podcast series, Work in Progress with Sophia Bush.

For now, Miles is focused on making his editorial debut as an author of an upcoming autobiographical self-help book. It will include multiple brief essays capturing human nature and highlighting the significance of emotional wellness.

Nevertheless, Miles has a lot to offer to the community and world and is working selflessly to bring positive changes. He is also involved in different business endeavors, which adds to his fortune. Looking at his work history and future projects, we can expect Miles Adcox's net worth to be massive.

Miles' Wife Is An Actress

Since Miles' professional career is so established and successful, many of his well-wishers are interested in learning more about his personal life and wondering if he has already found the person with whom he wants to spend his life. Well, the podcaster is happily married to his beloved spouse, Vanessa Evigan.

The lovebirds tied the wedding knot on October 29, 2016, at an intimate ceremony, and they have been together for almost a decade. Moreover, Miles Adcox's wife is an actress who has been featured in different TV series and movies. Some of her acting projects include Boy Meets World, Norm, Every Other Holiday, Less Than Perfect, and How I Met Your Mother, to name a few. 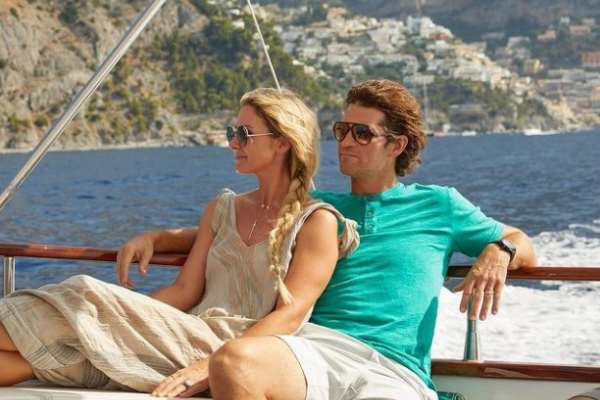 In addition to having successful careers, Miles and his partner are deeply in love. The couple enjoys helping one another through each stage of life and being there for each other when they are at their lowest. We hope their marriage will sustain every hardship and last a lifetime.

Vanessa Evigan's husband is someone who embraces fatherhood, and he is extremely grateful to be a dad to two loving children. With his wife, Vanessa, the speaker has welcomed a son, Maverick Adcox, and a daughter, Birdie Rose Adcox. While their first child was born on August 2, 2017, their second one arrived in May 2019.

The Adcox couple is wonderful parents to their two little kids, and they shower unconditional love, care, and pampering on them. Additionally, through the pair's social media posts, we can witness that the family of four is leading a comfortable life, giggling and loving each other. Nevertheless, Miles Adcox's children are still young, and it will be intriguing to see if they will follow in his lead in the future. For that, we will have to wait for a while.

Overall, Miles is a beautiful personality both inside and out. He is doing so much for many people and is kind, humble, and down to earth. In the coming days, it will be exciting to see what Vanessa Evigan's husband has to bring to the table, and until then, we wish him all the best in his future endeavors.