Some people might suppose that the phrase 'to be born with a silver spoon in one's mouth' embodies Ishana Night Shyamalan, who is the daughter of a renowned filmmaker and director. However, that's not the case, as Ishana is an aspiring filmmaker on her own who started working passionately at a very young age.

Shyamalan, also known as Ishana Shyamalan, is renowned for her works in The Holloway Picture (2018), Old (2021), and more. She is just getting started and has a long way to go by following her father's legacy. Therefore, let's get to know her in advance, as Ishana can conquer the film industry with her incredible talents.

Ishana was born in November 2000 in Philadelphia, Pennsylvania, USA. She was raised in Philadelphia and grew up in a loving and kind household. Ishana is the middle child of filmmaker and actor M. Night Shyamalan and his wife, Bhavna Vaswani. Ishana Shyamalan's father is well known for creating original films with modern twist endings and contemporary supernatural stories. M. Night's best works include The Sixth Sense, Signs, Unbreakable, and The Village.

Meanwhile, Ishana's mom, Bhavna, is an Indian-American social worker and psychologist. She co-founded the M. Night Shyamalan Foundation with her husband and Vibe Vault Fit, a gym/physical fitness center. Bhavna is also a Zumba presenter.

Ishana's parents tied the wedding knot on March 7, 1993, and they first met at New York University. The duo's relationship is beautiful, and the foundation of their marriage is unconditional love, honesty, and trust. Furthermore, the young filmmaker is also the granddaughter of Jayalakshmi Shyamalan and Nelliate C. Shyamalan.

Besides being a loving daughter, Ishana is also a motivating and giving sister. Her elder sibling is Saleka Shyamalan, a talented emerging musician who has released singles including Seance, The Sky Cries, Clarify, and Mr. Incredible. Her younger sister is Shivani Shyamalan, but not much is known about her professional background. It appears that she is pursuing her education. Nevertheless, the family of five is leading a content life, giggling, loving, and being supportive of each other. 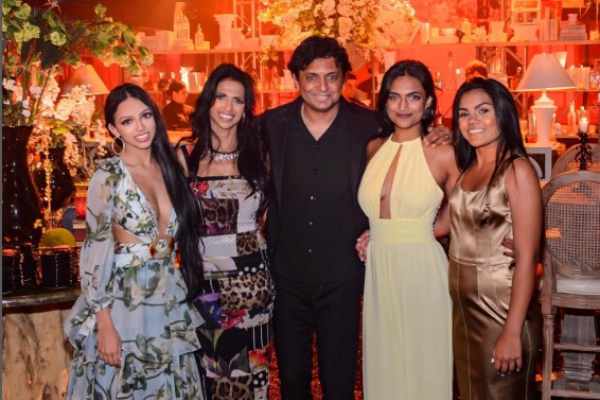 Talking about her educational background, Ishana attended The Baldwin School. Ishana has been training to be a director and writer since she was four years old. Later, she attended her father's alma mater, New York University, and studied filmmaking. Since she is passionate about filmmaking, we can understand how her passion aligns with her study field.

Ishana Shyamalan Net Worth And Career

Every aspect of life, including the career, is just as important. And we can't neglect a significant area of our life unattended, whether it be a career, health, relationships, or finances. Therefore, this subheading will cover some essential details of Ishana Shyamalan's net worth and professional career.

Just like her dad, Ishana is all set to create new milestones in the entertainment field. Following her father's lead, the Philadelphia native has just begun her professional career, and we can't wait to see her shine. At the start of her career, M. Night Shyamalan's daughter worked as an art assistant for the 2018 short film, The Holloway Picture.

Later, in the TV Series Servant, Ishana directed five episodes from 2021 to 2022, and her old man also directed a few episodes. She has also written three episodes for the series and teleplays one episode. Moreover, in 2021, Miss. Shyamalan served as the second unit director for Old (2021), which her father directed and wrote. In addition, Ishana has also directed most of the music videos of her elder sister, Saleka.

Since Ishana is just getting started, we can expect her to do even more and better in the coming days. Besides, the average median salary of assistant filmmakers in the States is $68,440. So, we can expect Saleka Shyamalan's sister's earnings to be around that range.

Although Ishana Shyamalan's fortune has not been revealed yet, her father has a net worth of $80 million. Therefore, we can assume that the Philadelphia native leads a comfortable lifestyle.

Is She Seeing Anyone?

Ishana is stunning, gifted, and endearing. She exudes an endless grace and appeal that amazes a lot of people. Considering all of these qualities, it would be surprising for her to be without any followers and fanboys. As a result, many people want to know who Ishana Shyamalan's boyfriend is.

Sadly, the second unit film director has not been vocal regarding her dating status and love life for now. So, it is unknown who she is seeing or is in love with. Also, her social media handles don't reflect much about her romantic relationships.

As M. Night Shyamalan's daughter is young, there are chances that she is focused on working on herself and her career. There are also possibilities that Ishana has yet to find a partner like her loving dad, as daughters do want their lover to resemble the qualities of their father. Whatever the reason is, we will have to wait a little longer to meet Shyamalan's partner. Nonetheless, she is extremely close to her family and is happy to receive their love for now.

All things said, M. Night Shyamalan's daughter is striving hard to make him proud and is poised to do exceptionally well in film-making. We wish Ishana the best of luck in her future film endeavors and hope she will always do what she loves.