Jacqueline Mars is an American heiress who is well-known for being the firstborn daughter of a popular businessman Forrest Mars Sr., the brain behind the Mars Inc. empire. She has been involved in the family business for some years now and seems to have amassed significant fame and fortune to her name.

Coming from a powerful business family, most people have been curious about her personal life. So, let's find out how she manages his personal and professional life in this informative article.

Only Daughter of Forrest Mars Sr.

Jacqueline was born on October 10, 1939, to her dad Forrest Mars Sr. and her mom, Audrey Ruth Meyer. Jacqueline Mars' dad was the founder of Ethel M Chocolate Factory and served as the director of Mars, Inc. Likewise, Frank C. Mars, who founded the confectionery manufacturer Mars, Inc, is her grandfather.

Furthermore, Jacqueline grew up alongside her siblings, John Franklyn Mars and Forrest Mars Jr., in  Pittsfield, Massachusetts. Jacqueline Mars' brothers made names as successful businessmen who have carried on the family confectionery company legacy. Sadly, she lost her brother Forrest in 2016. 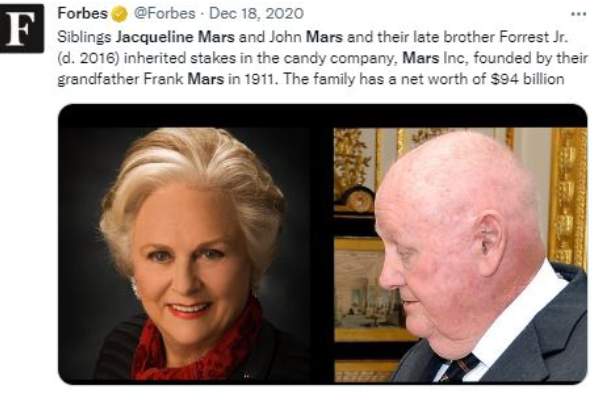 In addition, the billionaire woman went to Miss Hall's School and graduated in 1957. She competed in a lot of horse shows as an equestrian in her early years. Mars earned an anthropology degree from Bryn Mawr College in 1961.

Besides, Mars is the aunt of the famous American billionaire heiress and businesswomen Victoria B. Mars, Pamela Mars-Wright, Marijke Mars, and Valerie Mars.

The wealthy businesswoman is an heiress and a shareholder in her family company Mars Incorporated. Her shares of Mars Inc. and other assets were valued at $23.5 billion by Forbes magazine in January 2019. Jacqueline Mars's net worth as of 2022 is reported to be $38.6 billion.

Mars has been actively involved with Mars, Inc. since 1982, when she joined the organization as president of the food product group. The billionaire is still on the board of the corporation. She is the supporter of the Jacqueline B. Mars Competition & Training Grant of the US Equestrian Team Foundation, which aids in the development of US riders.

Jacqueline is not just a very wealthy heiress, but she also has a big heart and frequently chooses to give generously. She is also the owner of an organic farm that is perpetually preserved by the Land Trust of Virginia. All thanks to Jaqueline Mars' earnings, she has successfully amassed multi-billions to her name.

Had A Troublesome Car Crash

Jacqueline Mars was involved in an automobile accident on October 4, 2013, close to her house in The Plains in Northern Virginia. Her Porsche SUV crashed into the path of an oncoming Chrysler minivan, which was hauling six people. Irene Ellisor, an 86-year-old woman, died on the spot, and the driver, who was eight months pregnant, suffered some injuries and later miscarried.

Jacqueline admitted to falling asleep while driving and the test also revealed no traces of alcohol, drugs, or medications causing a blackout. Likewise, as per witnesses, she was neither speeding nor driving recklessly. Mars later faced charges of negligent driving and pleaded guilty.

Mars' driving license was suspended for six months, and she paid $2,500 as a fine. The affected family pleaded not to send her to jail, saying they forgive her and wished her to find peace eventually.

Talking about her marital life, Jacqueline has been married twice. She first wed David H. Badger in 1961, but in 1984, the former duo split up. Jacqueline Mars' ex-husband is her college sweetheart. The former couple welcomed three beautiful children who are  Alexandra Badger, Stephen M. Badger, and Christa M. Badger.

Following the divorce, Mars married Harold 'Hank' Vogel in 1986. However. Mars filed for divorce in 1994, claiming he had extreme cruelty. She said in court documents that her ex-husband had been verbally abusive and had denied taking any accountability for their marital issues. Vogel strongly denied these allegations in a countersuit.

Jacqueline Mars has remained even more secret than the rest of the Mars family, who all avoid publicity and the media. We hope that she finds her love someday and wish her the best of luck with her personal and business endeavors.