Co-founder and current CEO of multinational technology conglomerate Block Inc, Jack Dorsey, is famous as former Twitter CEO and co-founder. After stepping down as CEO of Twitter in May 2022, Billionaire Dorsey is now focusing on his payments company Block Inc (formerly Square), and launching an independent, open-sourced social media app, Bluesky, with a unique mission in mind. A key advocate of blockchain technology, Dorsey is also known for his philanthropic activities and interesting lifestyle.

Some call him a tech genius, nerd, organized, and a great entrepreneur, while some call him a checked-out CEO who mistakenly became a billionaire.

Born on November 19, 1976, to a homemaker mother, Marcia Dorsey, and Medical Equipment Engineer father, Tim Dorsey, Jack Dorsey grew up in his birthplace St. Louis, Missouri, and attended 'Bishop du Bourg High School' in St. Louis, Missouri. His father worked in a company that developed mass spectrometers, while his mother looked after the family and house and later owned a coffee shop.

Dorsey had a speech impediment, unable to pronounce more than one syllable when he was a kid. He was shy and used to spend a lot of time either alone at home or to ride city buses. When he turned eight, Jack's parents brought home an IBM PC Junior. He loved the computer and learned to speak to it in code. He soon taught himself how to build computer programs before he became a teenager.

Dorsey was equally fascinated with trains and maps. Looking at and studying trains encouraged him to learn about how things work in the real world and translate that into the virtual world. He eagerly listened to the messages he heard from the St. Louis emergency dispatch center. Young Jack was fascinated by the voices in the police scanner and how everyone talked in short bursts of sound. This system of communication actually inspired Dorsey later to create Twitter.

Dorsey told the CBS program 60 Minutes that he was fascinated by how emergency dispatch professionals were always talking about what they were doing, where they were going, and where they currently are. This actually gave him the idea for Twitter.

As a teenager, Jack Dorsey created software that tracked the movement of emergency vehicles on a map. His dispatch software remained in use by taxicab companies for decades afterward.

After graduating from high school, Jack enrolled at the 'Missouri University of Science and Technology.' He later transferred to 'New York University.' While studying at the University, he came up with the idea of sharing short messages with friends. Dorsey, however, dropped out of the University before receiving his degree.

Soon Dorsey moved to Oakland, California. He started his company in 2000, offering his dispatch software through the internet. The man of ideas came up with an idea for a site with the feature of combining the broad reach of dispatch software with instant messaging.

He started thinking seriously short message communication service idea which would update his family and friends about his status.

However, his dispatch company didn't do well, and he was making his living via freelancing. One instance of his freelancing job was to write software for a system that sold tickets to tourists visiting Alcatraz prison. He spent his days imagining and visualizing his dream, attending massage therapy courses, working as a licensed masseur, attending concerts, sitting in cafe and sandwich shops in South Park.

Finally, Jack got hired as a freelancer for a podcasting company, Odeo. Biz Stone, the former Odeo executive, Noah Glass, and Evan Williams, Odeo co-founder, liked his strong work ethic and hacking skills. Soon, Jack Dorsey shared the concept he had envisioned for a long time. After Odeo went out of business, Williams, Stone, and Dorsey soon started a new company, Obvious, in 2006. The name later evolved into Twitter, the domain which the founders bought at around $7000. Jack created the site to post short messages (140 characters or less) instantly within two weeks, known as 'tweets.'

Dorsey was appointed as Twitter's chief executive officer. Jack Dorsey, a shy person in nature, created a communication platform that was quickly liked by millions of people around the world. The boyish-looking young man with a nose ring and tattoos removed the ring from his nose to look like a CEO.

In 2008, Co-founder Evan Williams replaced Dorsey as Twitter's CEO, though he stayed on board. Soon, Jack was requested to take the lead position of CEO again in 2015.

Though a struggle initially, when celebrities and company CEOs started using the platform and tweeting, Twitter became a global sensation. Twitter even became a powerful platform for U.S. Presidential candidates like Barack Obama and John McCain in 2008. The candidates used the platform as a method for updating their supporters while on the campaign trail. 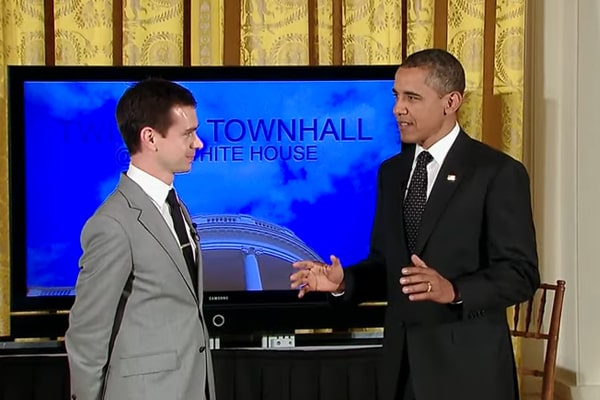 In 2009, Twitter became the main platform for June presidential elections in Iran. With the government blocking text messaging and foreign news satellite coverage, Iranian Twitter users used Twitter with multiple live updates. State Department spokesperson even emailed Jack Dorsey to delay Twitter's scheduled maintenance as it was playing a significant role at a crucial time in Iran, to which Twitter complied.

Dorsey as CEO and Co-founder of Square

In 2009, when Dorsey was fired from Twitter's CEO role, he met, brainstormed, and envisioned another idea of mobile payments company with tech engineer and his first boss Jim McKelvey to form 'Square Inc.' Jack had previously worked as an intern in McKelvey's publishing software company when he was 15, and Jim called him Jack the Genius.

'Square' eventually became a success and branched into financial and merchant services rapidly. Dorsey and McKelvey took the company into public in 2015. Dorsey became and still serves as the CEO of the company since 2009. The name of the company was changed to Block, Inc in December 2021. You can have a clear view of the company Square in the video below.

According to Forbes, Jack Dorsey's Net worth is around $6.1 billion currently. So, how and when did he start stepping into the billionaire status?
Jack Dorsey had always put his entire focus on bringing his ideas and vision into reality. He was not much into entering a millionaire or billionaire's club or increasing his personal fortune.

However, In November 2013, when Twitter went into public and made its initial public offering, the company's initial stock price of $26 quickly rose to $45 during its first day of trading. Soon, Jack Dorsey's stake in Twitter of around 23.4 million shares made him a billionaire with around $5.6 billion net worth.

The tech innovator and co-founder got paid a symbolic sum of $1.40 in 2018, as mentioned in a regulatory filing.

The reason behind such low pay was Dorsey's "commitment to and belief in Twitter's long-term value creation potential."

According to Forbes, Dorsey, however, bagged $80 million in 2018. He sold 1.7 million shares of his payments company, Square, and it became worth $4.7 billion.

His commitment is indeed worth appreciating. COO Parag Agrawal, who took over the CEO role, after Dorsey left the leading role. Agrawal earned annual salary of $ 1 million.

Jack Dorsey bought his first House in San Francisco, in the Sea Cliff neighborhood, in 2012. According to Mansion Global, he bought the home for around $10 million, having two bedrooms. The property had a view of the Golden Gate Bridge, which Dorsey felt and viewed as a marvel of design.

However, Dorsey decided to expand the property by purchasing another house located nearby for $22 million in late 2018. The two-story home was first built in 1962 on the edge of a cliff.

Jack Dorsey had bought another property, a home that was built in 2017 in California's luxurious Hollywood Hills neighborhood. However, he did not spend many days there. After completing the purchase of the $21 million home in San Francisco, he listed the L.A. house on sale. He sold the House to a UCLA Football player, Amir "Nick" Ekbatani, for $4.625 million.

In 2022, Jack Dorsey stepped down officially as Twitter's CEO in May 2022. Billionaire Elon Musk has taken over the company, made it private, fired top executives and is working on restructuring of the company.

Jack Dorsey, who has around 6.4 million followers on Twitter, has garnered the interest of women too. Ladies don't seem to be after his money but after his personality, his interests, his lifestyle, his philosophy, and his daily habits.

Though Dorsey is private about his personal and romantic life, in September 2018, Page Six reported that Jack Dorsey and Raven Lyn Corneilthe were spotted together at the Harper's Bazaar Icons party during New York Fashion Week. It seemed that they were dating; however not confirmed.

Jack Dorsey was also linked with artist Kate Greer. It seemed he had a four-year relationship with her before Greer moved on.