If you are a follower of MMA and keep yourself updated about every match, you must be familiar with Joe Riggs. He is an American bare-knuckle fighter and a mixed martial artist signed with BKFC. He has been active for quite some time and has won many matches and tournaments, which has helped him gain fame and fortune.

Joe is extremely passionate and has established a name for himself in the MMA world. Similarly, many people are interested in learning about his personal and professional career. As a result, in this biography, we'll try to provide you with important information about Joe Riggs.

He Began Boxing As A Child

Joe was born on September 23, 1982, in Sanford, Maine, USA, and he was raised in Phoenix, Arizona. Joe Rigg's father is Andy Riggs. The talented personality often shares pictures of his old man on his social media handles and expresses his love for him. Moreover, he began boxing with his dad when he was a child. Later, he fell in love with wrestling in high school.

In addition, Joe must have had an amazing childhood as he grew up alongside his six siblings. Speaking of Joe's education, he first attended Cactus High School. Later, he enrolled at Glendale Community College, where he earned Criminal Justice degree. While he was in Glendale, he followed Randy Couture, a former mixed martial artist, and he became All-American twice.

What Is Joe Famous For?

Joe has been a part of the Bare Knuckle Fighting Championship since 2018, but this is not his first promotion. In fact, he gained much notoriety after competing in UFC, where he faced some of the well-renowned fighters. Similarly, he also fought in WEC, Strikeforce, Bellator, and King of the Cage previously.

Speaking of his UFC career, in 2004, Riggs made his debut against Joe Doerksen and defeated him via submission. Then in 2008, he entered Strikeforce and won over Luke Stewart and Phil Baroni. After being part of several other wrestling promotions, he returned to UFC in 2014 and stayed till 2016. Additionally, Riggs was also the WEC Middleweight Champion in the past.

Besides this, there is more to Joe that people are still unaware of, so let's learn more about his career and earnings.

In 2001, Riggs made his debut in professional mixed martial arts and has performed amazingly in almost every match since. His fortune is primarily based on his earnings as a fighter. Similarly, Joe Riggs' net worth must be enormous, given his fantastic career and accomplishments.

Furthermore, Riggs has previously fought in the UFC, WEC, Strikeforce, Bellator, ProElite, M-1 Global, and King of the Cage, and his UFC record is 41-17-0. As already mentioned, Riggs was the WEC Middleweight Champion in the past. He debuted at WEC at WEC 9 against Alex Stiebling. Likewise, the Stanford native signed with Bellator on January 10, 2011, to fight in its Middleweight division.

In 2018, Riggs signed with BKFC, and on October 20, 2018, he made his promotional debut against Brok Weaver at BKFC 3: The Takeover. The handsome guy has fought in different matches and must have cashed a notable sum. Let's look at some of Joe's fight records down below:

As we can see he has cashed thousands of dollars from his bouts. Additionally, as per Celebrity Net Worth, Joe Riggs' net worth is $500 thousand. Nevertheless, in the future, his fortune will definitely increase significantly. Futhermore, the American fighter will face Josh Dyer in BKFC 29 MONTANA 2 on September 10, 2022.

David Mundell is another MMA fighter who has a massive fortune.

Well, talking about Riggs' relationship status, he is a happily married man. Joe Riggs' wife is Lisa Riggs. Going through their social media account it is known that the lovely pair went to the same school. So, could they have started dating in high school? 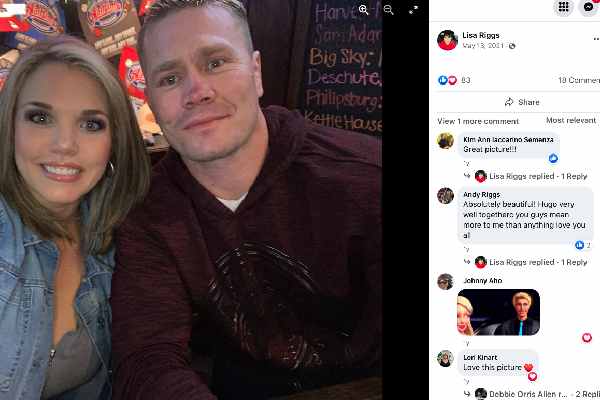 In addition, the husband-wife duo's social media posts express their affection for one another. Joe's spouse is very supportive of his career. The married couple looks extremely lovely together. Having said that, we wish them a long and happy marriage and hope to see them together for many years to come.

The appealing personality is a dedicated and caring father, in addition to being entirely career-focused. Likewise, it can be seen from his Instagram posts that he is the father of two beautiful kids. Joe Riggs' children are Joseph Diesel Riggs and Jadin Riggs. Joe's son was born in 2007, whereas his daughter was born in 2009. Moreover, the couple's little ones seem to be involved in soccer.

Furthermore, the powerful personality showers his children with immense love and care, as evidenced by his posts. His kids must also be very proud of his achievement. We wish his adorable babies a bright future full of joy and good health. Also, Joe went through a hard time when his infant child passed away after a brief illness.

Overall, the 6' 0" tall fighter appears to be flourishing both professionally and personally. His hardworking, determination and effort have enabled him to establish a name for himself in the MMA world. We wish Riggs very good luck in his upcoming tournaments.