David Mundell is a popular name in the MMA world whose journey from amateur fights to BKFC has been nothing more than impressive. For instance, he became the co-main event winner of Bare Knuckle Fighting Championship 25. Following his impressive back-to-back victories in the promotion, he ranks no.1 in the light heavyweight division as of now.

It is normal for people to be curious about someone who is famous. After emerging as a winner in BKFC 25, David's fans are eager to learn about his personal life. So, in this short biography, we'll learn the necessary facts about David Mundell. Keep scrolling till the end of the page to discover more about the fighter's life.

Played Football In His High School

The mixed martial artist was born on August 1, 1991, in Oldsmar, Florida, USA. Looking at his Facebook profile, it is known that David Mundell's mother is Debbie Landis Eckerdt. In addition, he grew up alongside his two siblings, Timothy Mundell and Stephanie Jackson.

Did you know Mundell discovered combat sports quite late in his life? In fact, the talented personality was a football player in his high school. But as he was a bit shorter than other athletes, he decided to instead try wrestling. Moreover, he fell in love with it. David discovered Brazilian jiu-jitsu after wrestling, and eventually, the world of MMA opened up to him.

His MMA career began after he learned the discipline of striking. Furthermore, he went to East Lake High School. Other than that, he has not revealed which degree he pursued.

Was The Part Of BKFC Main Event

Mundell has experienced greater success than failure in the MMA world. In the BKFC, too, he has shined since joining. He gained much notoriety after being selected for the main event of BKFC 10 Lombard vs. Mundell. He was set to face his idol Hector Lombard, one of the greatest fighters with a pro-MMA record of 34-10.

Moreover, Mundell wasn't even supposed to fight at BKFC 10, as Joe Riggs was supposed to face Hector. However, Riggs pulled out of the bout, and David took his place. Sadly, Lombard defeated the latter in the match. Nevertheless, it was a good effort, and Mundell bounced back to winning in the next combat.

Now, let's learn more about his earnings and career.

David Mundell Net Worth And Career

David is a hardworking guy, balancing his personal and professional life perfectly. As per the 2020 article of FANSIDED, he was also holding a day job alongside competing in the ring. Mundell was working eight hours a day as an electrician at that time. Hence, he was also earning money from his side job, which must have added to David Mundell's net worth.

Well, talking about David's MMA career, his pro-MMA record is 10-5-0, whereas his BKFC record is 5-1-0. His only loss in the latter promotion came against Lombard, as already mentioned. As he has performed excellently in every tournament and match, he must have pocketed immense fortune. Now, let's take a look at some of David Mundell's BKFC fight records:

The fighter must have received adequate compensation for his several victories. Similarly, according to sportskeeda, a competitor makes an average salary of $2,500 for a low-end BKFC battle. However, a few of the Bare Knuckle Fighting Championship's well-known fighters have revealed that they receive significantly more pay.

The handsome guy has also launched his merch. Here are some of his products and their prices:

So, one can expect David Mundell's net worth to be a considerable sum, thanks to his salary from his fights and earnings from his merch sales.

Having someone who supports you and sticks by your side in every moment of your life makes your struggle and hardships much easier. Likewise, the East Lake High graduate also has someone who makes his life much easier, i.e., his partner. Well, the accomplished fighter is happily married to Jasmine Mundell. The lovely pair has been together for a long time and has remained close through their ups and downs.

Furthermore, the lovely duo tied the knot in 2019. Additionally, David Mundell's wife also attended the same school as him. As per her FB, she first met her hubby in 2000. Could it be the pair started dating in their school days? Also, the husband-wife duo's social media posts reflect their love for one another.

Moreover, David Mundell's spouse is very supportive of his career. The married duo also looks very stunning together. With that being said, we wish them a long and happy marriage and hope to see them together for many years.

David and his partner are parents of two children, Lillian Mundell, aka Lilly Mundell, and Karsyn Mundell. Despite his busy schedule, the BKFC fighter always makes time for his kids. Also, David Mundell's children often appear on his social media posts. As his little bundles of joy are still young, it is too early to discuss their professional life. Nevertheless, their loving parents must pamper them really well. 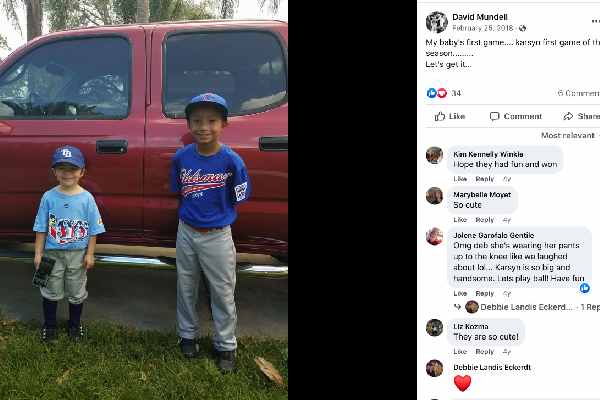 Nonetheless, the 5' 8" tall fighter is a devoted father who has been raising his little ones with immense love and care. We wish his adorable son and daughter a happy future filled with happiness and sound health.

Mundell's career has helped him gather fame and fortune. Additionally, he is married to a loving wife who has been with him through thick and thin. We wish him a healthy and prosperous life ahead.