Tony Shalhoub Net Worth - Income And Earnings From His Career

Home Net Worth Tony Shalhoub Net Worth - Income And Earnings From His Career.

Tony Shalhoub is a renowned actor who has accumulated a massive amount from his career. Image Source: Social Media.

Tony Shalhoub, born Anthony Marc Shalhoub, is a renowned American actor. Mostly recognized for his role in the television series Monk as Adrian Monk, he is the recipient of numerous awards. For example, he has won four Emmy Awards, a Golden Globe Award, six Screen Actors Guild Awards, a Tony Award, and a Grammy Award nomination.

The actor has been active since the 1980s. He must have accumulated a massive fortune from his acting career, which has spanned more than three decades. Hence, this article will be about Tony Shalhoub's net worth and salary.

Tony Shalhoub Net Worth And Earnings

The award-winning star was born and raised in Green Bay, Wisconsin, in a Lebanese Maronite household with his nine siblings. He was introduced to acting at the age of six by his older sister, Susan Shalhoub Larkin. She had told him that he was going to be an extra in an operetta of The King and I at her high school.

After completing his high school studies at Green Bay East High School, Shalhoub enrolled at the University of Wisconsin-Green Bay. However, he earned his bachelor's degree from the Univerity of Southern Maine. Later, he graduated from the Yale School of Drama in 1980 with a Master's degree in fine arts.

After that, the Monk actor moved to Cambridge, Massachusetts, and spent some time with the American Repertory Theater. Then, he shifted to New York City and shortly after made his Broadway debut in 1985. Since then, Tony has appeared in several plays, films, and television shows. He must have made a fortune from his career throughout the years. As per Celebrity Net Worth, Tony Shalhoub's net worth is $20 million.

So now, let's further break down the artist's earning sources and salary from his career in the entertainment industry.

Shalhoub spent four seasons with the American Repertory Theater, appearing in about 18 stage plays, including The Berlin Requiem and The Seven Deadly Sins, Three Sisters, and The School for Scandal. Then, he found work waiting tables in New York City. Tony finally made his Broadway debut in the 1985 production of The Odd Couple.

Since then, the Wisconsin native has appeared in numerous Broadway plays, such as Conversations with My Father, Lend Me a Tenor, The Band's Visit, Golden Boy, etc. In addition, he won the 2018 Tony Award for Best Actor in a Musical for his performance in The Band's Visit. Likewise, he was nominated for Tony Awards in various categories for his performances in other plays.

Furthermore, Shalhoub has also appeared in several other Off-Broadway productions, which include The Scene and The Old Neighborhood. He has seen much success as a stage actor, so he must have received a decent salary for his performances in the stage plays.

Salary From Television Movies and Series

The award-winning actor started his small-screen acting career with small roles in various television movies and series. It continued until he landed a regular role as the cab driver Antonio Scarpacci in the sitcom Wings in 1991. Following that, he landed more television roles until 2001. After playing the role of Dr. Joseph Nassar in the TV movie The Heart Department in 2001, he went on a three-year hiatus from television.

Then, Tony returned to the small screen with the USA Network series Monk, appearing as the lead character, Adrian Monk. For his role in the show, he was nominated for an Emmy Award for Outstanding Lead Actor in a Comedy Series for eight straight years, winning the title in 2003, 2005, and 2006.

Following the success of Monk, Shalhoub starred in The Marvelous Mrs. Maisel, All Downhill from Here, Mickey Mouse Mixed-Up Adventures, etc. He must have earned a significant amount from his television appearances. Furthermore, from featuring in The Marvelous Mrs. Maisel, Tony Shalhoub's salary was $250,000 per episode, according to the 2019 article.

The four-time Emmy winner made his big screen debut with a small role in the 1986-released movie, Heartburn. Since then, he has played in over fifty films, including The Man Who Wasn't There, Impostor, Cars, Pain & Gain, and Linoleum. He also starred in Men in Black and Men in Black II, playing the role of Jack Jeebs. He also acts as Mr. Alexander "Alex" Minion in the spy action comedy film trilogy, Spy Kids.

Several of the movies that Tony has acted in have seen much success at the box office. So. let's look at some of his movies' box-office collections in the table below.

As shown in the table, the movies were able to accumulate hundreds of millions of dollars. Likewise, the talented personality must have obtained his fair share for his participation in them. This just explains how Tony Shalhoub's net worth of $20 million came to be. With the growth of his popularity and him getting more roles, his fortune will most likely rise.

Fellow actor Jake Lacy also has an incredible net worth.

The Monk star is happily married to his partner, Brooke Adams. Tony Shalhoub's wife is also an actress with a fortune worth $10 million. In 1993, the husband-wife duo purchased a house in LA for $675,000. Later, in 2016, they listed it for sale for under $4 million and ultimately sold the home for $3.6 million.

In November of 2016, the pair paid $3.995 million for an Upper Wide New York City condo. However, they listed this place for sale in April 2022 for $4.995 million. Additionally, the celeb couple has owned a six-acre property on Martha's Vineyard for several decades. They purchased the property for $750,000 in the late 1990s. 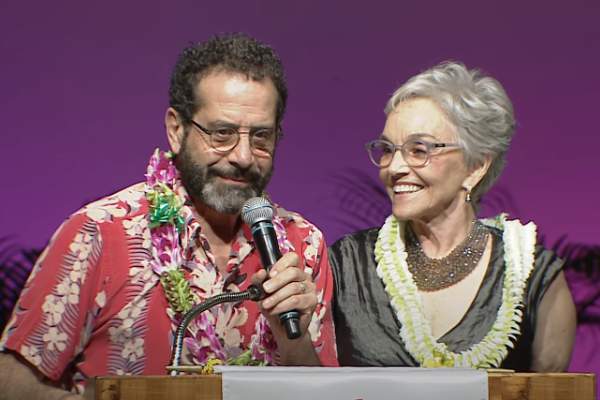 Tony Shalhoub and Brooke Adams have owned a six-acre property for several years which was worth $750,000 in the late 1990s. Image Source: Social Media.

Tony Shalhoub and his spouse, Brooke, must enjoy a happy and blissful life thanks to their massive wealth. Furthermore, their riches are likely to increase with time as their career is still ongoing. Nonetheless, we wish the actors more fame and fortune in the future.