It was huge, heartbreaking news for WNBA Superstar and two times Olympic gold medalist Brittney Griner's wife, Cherelle Griner, and the whole USA, when Brittney Griner was arrested in Moscow airport on February 17.

Back in February, when the basketball player was traveling from New York to Russia, she was caught allegedly packing hashish oil in her bag in the form of a vape. As a result, Griner was charged with illegal drug possession and smuggling and sentenced to nine and half years imprisonment in August.

Two months after such a sentence, Brittney Griner's wife, Cherelle Griner, spoke with CBS's Gayle King in an interview that her wife was wrongfully detained, and she is terrified by what's happening to her there in Russia.

She was hopeful and grateful for US President's statements and US officials' attempts to bring Brittney back home safely. However, her wife's appeal was denied on Tuesday, October 25. This has left Cherelle emotional and devastated.

Let's get into more detail!

Cherelle Griner Feels Her Wife to be a Hostage in Russia

In a CBS interview, Cherelle shared that all of this incident of her wife getting arrested, detained, and sentenced to long years of prison in a different country feels like a movie to her. When such things happen in movies, sometimes those situations don't end well, and they never get their person back. And this feeling terrifies her a lot.

She added that she never thought our president and a foreign nation's president would sit down and discuss her wife Brittney's freedom. Griner feels that her partner's punishment was too harsh for her mistake. She feels that her wife is a hostage there in Russia.

Cherelle is filled with all sorts of emotional thoughts and worries if she is getting her soulmate back. Will she ever get to see her wife again, and what happens next?

According to the White House, President Joe Biden invited and met with Brittney Griner's wife, Cherelle Griner, and Paul Whelan's sister Elizabeth Whelan in September in the Oval Office.

According to the statement from Press Secretary Karine Jean-Perrie, The President held the meetings separately in order to show his commitment to working through all available ways to bring Brittney and Paul Whelan home safely. He spoke to them and asked about Elizabeth and Cherelle and their respective families's wellbeing during this painful time when their beloved member was wrongfully detained in a foreign nation.

After the meeting, Cherelle Griner posted on her Instagram to thank President Joe Biden and everyone putting their efforts into bringing BG (Brittney Griner) back home safely. 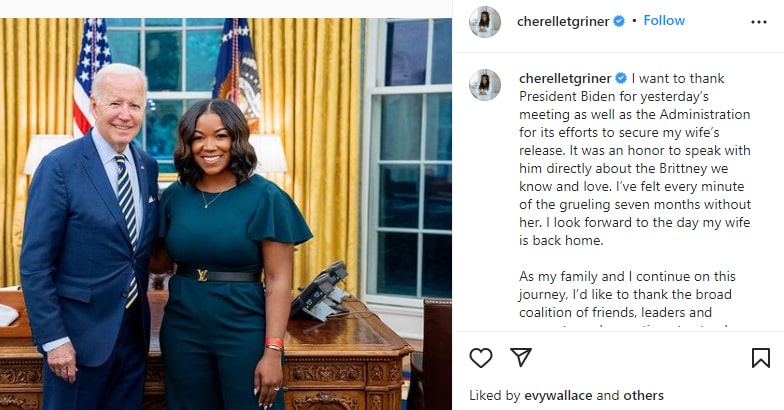 Paul Whelan, another Michigan resident was also wrongfully detained in Russia back in 2018. Paul went to Russia to help a fellow Marine who was getting married there. But instead got entrapped by another friend according to Paul's brother David. David also very grateful that WNBA star BG's case has brought attention to a non-celebrity Whelan's status in Russia and is hopeful to see his brother return home.

Law Alumni Cherelle Continues to Voice for Her Wife

NCCU Law Alumni Cherelle is emotional, but she continues to advocate for her wife BG's wrongful imprisonment. She is asking supporters worldwide to voice for her wife and other loved ones who are unfairly detained in foreign nations like Paul Whelan. She continuously expresses her opinion by arranging meetups and on her social media that she has been noticing and resonating with families who share her circumstance.

She expressed that her heart was overwhelmed with emotion when seven families were reunited with their loved ones who had now returned from Venezuela.

With campaigns of bringing her wife Brittney home, Cherelle has been sharing the efforts from a campaign like WE ARE BG and urging millions of supporters to get involved and share their words of support.

Brittney Griner apologized for her mistake in the appeal hearing and stated she did not intend to make such a mistake and break the law and was hopeful for leniency in the charges against her, but the judge in the court did not accept her appeal. US state government is in continuous talks with the Russian government for a prisoner swap, reportedly a Russian arms dealer nicknamed "The Merchant of Death."

Cherelle Watson met her wife, Brittney, while attending Baylor University as an undergraduate. Brittney Griner married her sweetheart Cherelle who changed her last name from Watson to Griner in 2019.

Cherelle attended Baylor University from 2010-2014 and majored in political science and government and minored in family and child studies, and graduated from the North Carolina Central University of Law in May 202, as mentioned on her LinkedIn page,