Sophie Hunter is a British performer, playwright, and theater director. Though she is known as Benedict Cumberbatch's wife by many, her status as a creative and artistic playwright and theatre director is widely known among Broadway viewers and theatre geeks. The multilingual playwright joined Hollywood much earlier than she officially started directing plays though her priority has shifted towards the latter through the course of her career.

Sophie Hunter is popular for the avant-garde style of directing and writing. This style developed into her work after a few years into her career. She has also adapted and done revivals of a few other playwrights' work but with a sprinkle of her style and approach.

Sophie Irene Hunter was born on 16th March of 1978. She was born to father Charles Rupert Hunter and mother, Anna Katharine Hunter, in England. Though her parents got divorced some years later, they managed to bring three kids into this world. Her two brothers Timothy Michael Hunter and Patrick James Simon Hunter, are three and six years younger than her, respectively.

Furthermore, Sophie also has two half-siblings from her father's second marriage, Lily-Rose Hunter and Samuel Hunter. Sophie is also the niece of pianist Julius Drake and granddaughter of world war I politician.

Speaking of Sophie's education, she went to St Paul's Girls' School in Brook Green, Hammersmith in North London. Later, she attended the University of Oxford, where she studied Modern languages and specialized in French and Italian. Subsequent to her graduation from Oxford University, she studied Avant-grade style for two years in L'École Internationale de Théâtre Jacques Lecoq in Paris. Later, she moved to New York to train in the Saratoga International Theatre Institute under Anne Bogart, an Opera director.

With the aid of her education and training in the related field, Sophie has transitioned her hobby into a career and found immense success.

Career and Other Projects

Following the path she took since her college days and afterward, Sophie started her work in theatre. The initial experience she obtained by working with Anne Bogart aided her in her work until she developed her own style. Hunter came into the limelight as a theatre director after her debut with The Terrific Electric. Her first play is also one of her most popular ones. After that, she worked on countless other projects. Among the 10+ major theatre productions, she's been a part of 69° South or the Shackleton Project, Ghosts, Lucretia, and The Terrific Electric.

Sophie got her first break into Hollywood after she portrayed the character Bella Monday in Midsomer Murders in 2004, three years before her first theatre production, The Terrific Train. From 2004 to 2010, she appeared in 15 movies and TV shows, despite her not being an Infront-of-the-camera person.

Although Sophie's career mainly consists of her plays and her roles in a few movies and TV shows, she has performed in a few plays herself. She has performed in 3 plays as an actress. She was also included in Hamlet, Silverland, and Macbeth in 2005, 2007, and 2008 respectively.

All these acting and directing projects would surely manage to gather quite a net worth for Sophie Hunter.

Sophie Hunter Net Worth and Earnings

Sophie Hunter's net worth must be ample enough to let her live a wealthy life. Her work directing and managing plays in New York and other major cities of the US and UK would surely make up a large fraction of her money. According to Broadway.org, the average ticket price may range from $20 to $175. This price might go up depending upon the seats you are willing to pay for. Seeing how a theatre production may last from a few days to few weeks would generate a great amount of revenue. With all the plays she's directed, there's surely going to be a large amount being contributed to Sophie Hunter's fortune through her theatre works.

Hunter has mainly had smaller roles in the movies and TV shows she has been a part of. Despite this, there's still a lot of money involved in these projects. Sophie has probably made a good chunk from her acting jobs. With regards to Backstage, a guest actor can make around $4k to $7K, depending on the size of the production. She must've accumulated a good sum from her work as an actress and a performer, which helped increase Sophie Hunter's net worth.

Throughout her career, the fortune Sophie has gathered enables her to live a fulfilling life with her husband, Benedict Cumberbatch. As for her husband, Cumberbatch's net worth is estimated to be $40 million. So it is safe to speculate that the beautiful couple lives a lavish life.

Sophie is married to Benedict Cumberbatch, an English actor born in London, England. Cumberbatch is best known for his performance as Doctor Steven Strange in the Marvel Cinematic Universe movie franchise and as detective Sherlock Holmes in the BBC's Sherlock. Popular for his charming screen presence and outstanding acting, Sophie Hunter's husband has starred in The Imitation Game, Doctor Strange, Brexit: The Uncivil War and appeared in much more movies and TV shows. 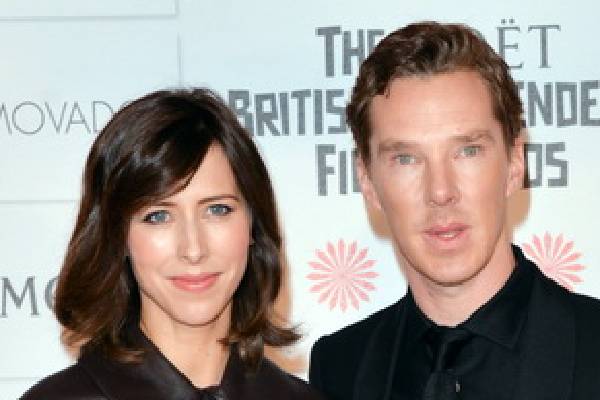 Cumberbatch became Sophie Hunter's husband on 14th February 2015, following a 17-year friendship between them. The lovely duo tied the knot in a lavish ceremony at the 12th-century church of St Peter and St Paul's church in the Mottistone village on the Isle of Wight. At the time of their marriage, Hunter was already pregnant with their first kid.

Sophie Hunter's husband was previously involved in a relationship with Olivia Poulet, his high school darling when he first met Sophie. The beautiful couple remained friends for a long time before it blossomed into an adorable romantic relationship. Though it is not confirmed, their relationship is rumored to have started in 2014, when they attained the French Open together. They've been able to shield off the media even though Sophie and Benedict get chased by the paparazzi all the time.

Despite this, the lovely marital pair appears in various Interviews and movie premieres and looks absolutely adorable doing it. To add to that, her marriage with Cumberbatch has taken her fame to a whole new level.

Kids And Life As A Mother

As previously mentioned, Sophie gave birth to her first kid four months into her life as a wife to the Oscar-nominated actor. Sophie Hunter's children were born in 2015 and 2017. The couple named their older kid Christopher Carlton Cumberbatch and Hal Auden Cumberbatch is their younger son's name. Although the Cumberbatch couple is secretive about their kids, It's publicly known how deeply they love their kids.

Having a successful career, some would think Sophie would keep her work as steady as it has been in previous years. She also realizes the importance of raising her kid in front of her eyes and giving them the care and love they deserve during childhood. Hence, Benedict Cumberbatch's wife Sophie has not been involved in theatre or acting projects since having her two delightful kids.

Sophie and Benedict are living happily with their two sons. But according to some rumors and a little bump on Sophie's stomach in some pictures suggests the pair were set to welcome their third kid in 2019. If the rumors are true, our best wishes to the pair, hope that the baby is healthy and happy.