Social media influencer India Royale has become famous for her YouTube channel and her makeup line, India Royale Beauty. She is most notably known for being American rapper Lil Durk's fiancee.

A business entrepreneur and a mom to two young daughters, here is everything one needs to know about Lil Durk's partner India Royale.

Entrepreneur India Royale was born on March 9, 1995. She is a beautiful woman who was born and raised in Chicago, Illinois. There is little known to the public about the details of the makeup entrepreneur's early life. However, she has posted a picture of herself with her father and called herself a "daddy's girl."

Besides that, there have been reports stating that she is the youngest of 4 siblings. India Royale has an elder brother and two older sisters. 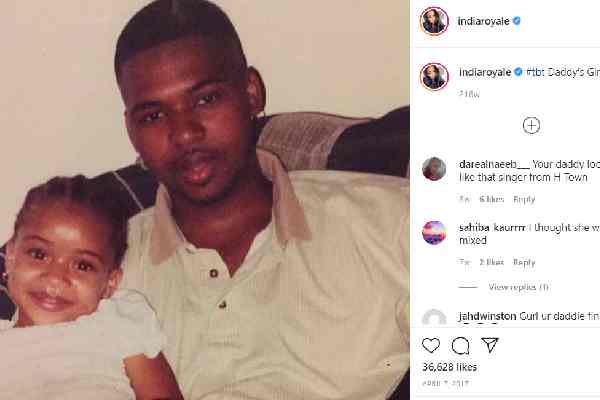 India Royale has not let the public know much about her personal life but revealed that she is a daddy's girl. Image source: India's Instagram.

The social media influencer seems to be a massive fan of the late rapper Tupac Shakur. She constantly posts his quotes and pictures of the rapper on her Instagram. India Royale also has paid tribute to Tupac on his birth anniversaries.

India Royale Net Worth And Career

Aforementioned, India Royale is an entrepreneur. The young businesswoman has multiple business ventures which help support her and her children's lives. She owns India Royale Beauty and India Royale's Hair Vendor. And with that, one can say that India Royale's net worth is substantial.

India Royale Beauty is a makeup line created by the social media personality. The makeup line is luxurious yet inexpensive and affordable for the general public. It is a favorite amongst many due to its long-lasting ability and excellent quality. The makeup line sells various items on its website and ships worldwide. Here are some of the makeup items she sells alongside their prices.

Alongside her makeup line, India Royale also sells hair vendors. Growing up African American, it must have been tough and expensive to have her hair done. As hair bought from retailers can be very expensive and hard to afford for many, India started a business to provide hair directly from hair vendors.

Without the involvement of retailers, hair can be relatively cheaper. Moreover, if one gets to know and deal with vendors themselves, they can start their own hair business one day. So, India Royale's initiative is providing more accessible and cheaper access to hair for women as well as help them to start a business too.

In addition to her business, India Royale is also a YouTuber. She runs a channel named after herself. According to Social Blade, the YouTube channel has over 384,000 subscribers and brings in between $1.1K to $16.8K a year. On that channel, she posts Vlogs, fashion content, and makeup tutorials.

India Royale's net worth must be comprehensive, looking at her multiple earning ventures. Even though her total fortune is unknown, it is clear that she lives a comfortable life with her family. Unfortunately, India does not share much about her lifestyle on the internet.

Lil Durk, India Royale's fiancé, has an impressive net worth of $3 million. With his good fortune, it is evident that he does a lot to support his family and children.

India Royale is currently engaged to American rapper Lil Durk. The couple started dating back in 2017. Even though the lovely pair look loved up in photos and things seem to be going well, their relationship has not been so smooth.

The rapper shut down the rumors and stated that they both had too much self-respect to cheat on one another.

In 2021, the engaged couple was hit with another rumor, and this time it said that they had split. However, judging from the lovely photos posted on Instagram, one can safely say that India Royale and her fiancé are still going strong.

As if rumors of cheating and split were not enough, the tabloids also accused India Royale to have been jealous and upset about being Lil Durk's sixth baby mama. Nevertheless, the businesswoman was quick to hit back at the trolls. In a tweet, the hair vendor responded that she knew what she was getting into when she decided to have a child with the rapper.

Furthermore, in a tweet, she stated that she is now his "obsession, lover, friend, authorized user on bank cards, and beneficiaries." 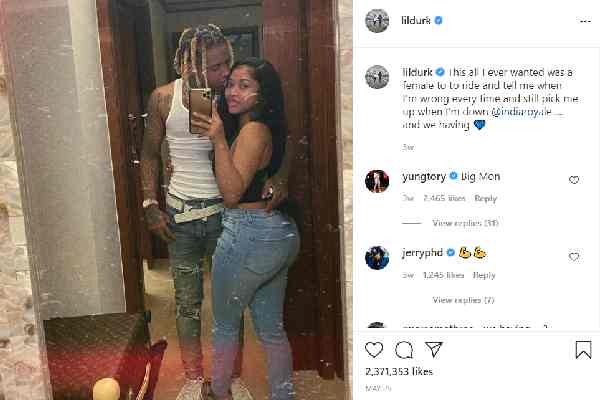 Despite all the scandals, the pair has been going strong. India's then-boyfriend Lil Durk proposed to her back in 2018 but is yet to announce the date of their wedding.

India Royale and Lil Durk share a lovely daughter named Willow. After being engaged for so long, their marriage will undoubtedly be gorgeous, and the soon-to-be husband and wife will enjoy a happy life together.

The rapper Lil Durk is very much in love with fiancée India Royale. The rapper loves his baby mama so much that he has written multiple songs about her. The duo is constantly together, and they do not hesitate in PDAs. Nor do they shy away from posting photos full of love with one another.

Before meeting Lil Durk, India dated some other man. There were a few videos and photos of her and her past flame going around on the internet. However, there are no official reports about India Royale's ex-boyfriend and his identity.

Did You Know India Royale Has Two Daughters?

The young entrepreneur is a doting mother of two children. India Royale's daughters are two cute little girls. The girls are very close to their mother, and they love one another dearly.

India Royale's eldest daughter, Skylar Royale, was born in 2014. Sky is very close with her younger sister. Unfortunately, not much is known about Skylar's father and India has never been public about her baby daddy.

Lil Durk's sixth (and India Royale's second) child's name is Willow Royale, aka Willow Banks. She was born in late 2018. Everyone loves the youngest member of the family. 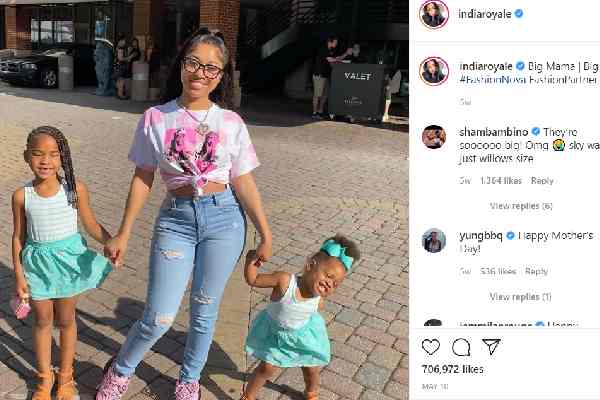 The Royale girls have an Instagram account where their mother posts pictures of them. They even have their own YouTube channel and India upload videos made about styling children's clothes.

We can see that India Royale is living a blissful wife with her two daughters and fiancé. The entrepreneur's business seems to be thriving. She is doing fantastic at life and growing all the time. We wish her the best for her future and growth.

In a 2019 vlog posted on her channel entitled "Come With Me To Get 4 Tattoo", India Royale got tatted by the tattoo artist Dakar Tattooing. Dakar is a celebrated tattoo artist based in Arizona who has a great clientele and is highly reputed. So there is no doubt why India chose him as her tattoo artist.

She got the name of her younger daughter Willow on the outside of her left wrist, a bird on the nape of her neck, and a heart just below her left ear. Before getting tattooed by Dakar, India Royale flaunted a beautiful tattoo of her eldest daughter Skyler's name. Her tattoos that pay tribute to her two daughters are certainly heartwarming and show the love a mother has for her children.

It was not just India Royale who got tattooed that day. She and her best friend, Keyah, got matching tattoos. The duo got a heart under their left ear to signify their friendship and love for one another.

Chloe Dygert is a professional cyclist from the United States who races with the UCI ...

Perry Baker is an American rugby player. He was named World Rugby Sevens Player of the ...