If you have heard songs like American Teenager, Crush, and Ptolemaea, then you must have definitely heard about Ethel Cain, a singer/songwriter hailing from the States. Although Cain doesn't aspire to become a celebrity, she has already found the beginnings of worldwide recognition and online devotees. In addition, she has no manager and no wish to force a hit on Spotify or TikTok.

Definitely, Ethel is different from several musicians who make music just to make money and gain fame. She is here to stay and curate music that people can relate to. Hence, we are presenting this short biography which revolves around Ethel Cain's life story.

Comes From A Southern Baptist Family

The talented musician was born on March 24, 1998, in Tallahassee, Florida, and raised in Perry, Florida. She was welcomed into this world by her mother, Juliet Anderson Horner, and her father. Her mom works as a homeschool teacher and part-time nail technician, while her dad is a truck driver currently working at the lumber mill. Ethel Cain's parents have been together since 1997.

Cain is not just a loving daughter; she is also the eldest of her three sisters, and one of them is Salem Anhedonia. Furthermore, the singer considers her childhood to have been both beautiful and torturous. Due to the failure of her own three baptisms and how her community perceived her, she felt suffocated by the strictures of her Southern Baptist upbringing.

After Cain graduated from high school, she found some real-world freedom in the theater program of a local community college. She then relocated to Tallahassee with hopes of enrolling in Florida State University for film school. Instead, Ethel slipped into a dismal dark hole of goth clubs, gender confusion, and hard drugs.

Moreover, at 12, Cain came out as gay to her family and left the church at 16. Following that, on her twentieth birthday, the American Teenager singer came out as transgender on Facebook and then legally changed her name to Hayden Silas Anhedonia.

Ethel Cain Net Worth And Career

Initially, the songwriter released her works from 2017 to 2018 to a small following of friends and followers on Instagram and Twitter under the names White Silas and Atlas. Following the release of her first debut single as Ethel Cain, 'Bruises,' she connected with Nicole Dollangagner via social media and opened for the artist in Chicago as part of the 'Heart Shaped Bed' tour.

Furthermore, in September 2019, Ethel released a small collection of songs named Carpet Bed, her first extended play under the Cain moniker. Later, the Tallahassee native was discovered by rapper Lil Aaron in January 2020. Aaron invited Ethel to meet with the publishing company Prescription Songs and signed with them shortly.

Ethel recorded her first EP with Prescription Songs titled Inbred in August 2020. Her first single with the new publishing contract was released in February 2021, titled Michelle Pfeiffer, featuring Lil Aaron. The song was featured on Billboard, Pitchfork, The Fader, and Nylon and was premiered on Paper.

Moreover, the Florida native released the single Gibson Girl on March 17, 2022, eventually announcing her debut album, Preacher's Daughter, which was released on May 12, 2022. Her other singles, Strangers and American Teenager, were released on April 7 and 21 of the same year, respectively. The album features thirteen songs and was released via her own Daughters of Cain label.

Overall, Ethel has had an incredibly successful singing career and made substantial earnings, considering her sponsors, tours, and events. Besides, the average salary of a singer in the United States is $50,256. So, Ethel Cain's net worth must be of a commendable sum as a result of her earnings from her music ventures.

READ MORE: How Supportive Was Clairo's Mother, Allie Cottrill, Regarding Her Musical Career?

Has Released Her Own Merch

Another major factor contributing to Ethel Clain's net worth is her merch sales. The musician has released several merch, and some of them are listed below alongside their prices.

All in all, Ethel Cain's net worth must be of notable amount. Hopefully, the singing sensation is leading a comfortable lifestyle with her well-earned riches.

You might also be interested to learn about Ryan O'Neal, who is a Chicago-based singer-songwriter, producer, and composer.

Who Is Ethel Cain Dating?

Ethel has seen many highs and lows in her personal life, so she prefers to maintain her romantic relationships as confidential as possible. Hence, fans are yet to discover about Ethel Cain's boyfriend. But we are sure that her partner will be as amazing as she is. Nonetheless, currently, she seems to be entirely focused on her professional career. 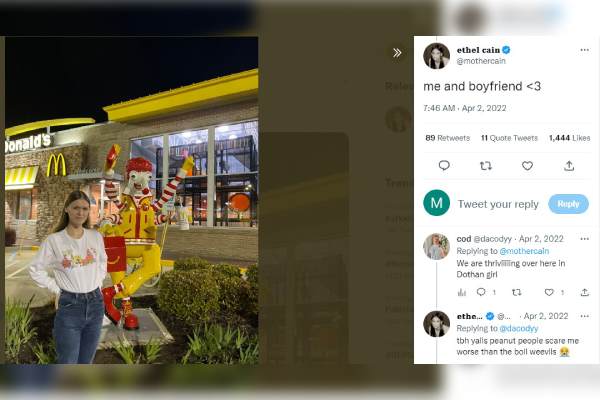 Overall, Ethel is a singing personality who isn't obsessed with fame or glamour but is concerned with curating impactful music. She doesn't want to live in the large cities where the music industry is centered. Instead, Cain is determined to introduce the industry into her world.