If you listen to music daily and are up to date about the latest trends, then you probably must have heard the song Jalebi Baby, which has over 276 million views on YouTube and has gained immense popularity on several social media platforms. Well, the man behind the label single's vocals and lyrics is non-other than the talented musical artist, Tesher.

A Canadian-Indian singer, producer, and rapper, Tesher's original name is Hitesh Sharma. Since Mr. Sharma is slowly gaining worldwide recognition, many are interested to know more about his personal life and professional career. Here's a short biography dedicated to the musical artist.

5 Interesting Facts About Singer Aaron May

Has A Supportive Family

The skilled musician was born in 1996 and raised in Regina, Saskatchewan, Canada. He was welcomed into this world by his mother, Indu Sharma, and his father, Mike Sharma. Tesher's dad is a videographer who records weddings, parties, and birthdays for members of the city's South Asian community, while his mom is a Health Information Management practitioner at RQHR- Pasqua Hospital. Likewise, Tesher is equally a caring and supportive sibling to his younger sister, Neha Sharma.

Furthermore, Hitesh began performing for crowds since 12 and has been passionate about remixes that toy with Bollywood from an early age. He was inspired by his Indian heritage and his Canadian upbringing. In fact, it was Tesher's father who recommended him to do the DJing.

Regarding his educational background, the performer graduated from Campbell Collegiate and later attended the University of Regina from 2013-2015. In addition, Mr. Sharma completed his Diploma in Business program from the Hill School of Business. The musician was a hardworking student who made the Dean's list each semester of his program. Additionally, he enrolled at the University of Western Ontario's Ivey Business School and completed his undergraduate degree.

Another music sensation whose family instilled musical interests in her, just like Hitesh, is Bedouine. Her original name is Azniv Korkejian, and she is a singer/songwriter.

Tesher Net Worth And Career

Mr. Sharma used to upload his remixes to YouTube and SoundCloud while attending high school. Later, Tesher produced the official Bhangra mix of Kar Gayi Chull in 2016 from the Bollywood film Kapoor and Sons soundtrack.

Professionally, Hitesh released his debut original single, Young Shahrukh, in February 2020, an original rap song he wrote, performed, and produced. The song's title references Shahrukh Khan, one of the most successful actors in Bollywood. It went viral on social media platforms which Sony Music India picked up in May 2020.

Like his first single, Tesher's other releases that did exceedingly well are Yummy Jalebi and Jalebi Baby. The latter is his second single, and it reached number one on the UK Asian Music Chart for seven successive weeks and amassed over 100 million streams. Following the success of his second single, Jalebi Baby, Tesher released a remix of Jalebi Baby with American singer Jason Derulo.

Moreover, Hitesh signed a worldwide deal with Capitol Records in 2021 in partnership with Universal Music India. The Regina native has earned significantly in his musical career thanks to his unique style and hard work. Although Tesher's net worth has not been revealed yet, we can expect it to be notable, considering his several sponsorships and merch sales.

Additionally, Young Shahrukh's singer also earns from YouTube ad revenues. His channel, Tesher Music, has around 1.5 million subscribers. As per SocialBlade, Tesher's monthly estimated earnings fall between $3.1K to $49.8K, and his yearly earnings range from $37.4K to $598.1K.

Who Is His Jalebi Baby In Real Life?

Since the famous jalebi baby singer has a huge fan following and admires, his fans are interested to know whose Tesher's jalebi baby in real life is. Unfortunately, Hitesh prefers to maintain his personal life under wraps; as a result, not much is known about his romantic relationships. 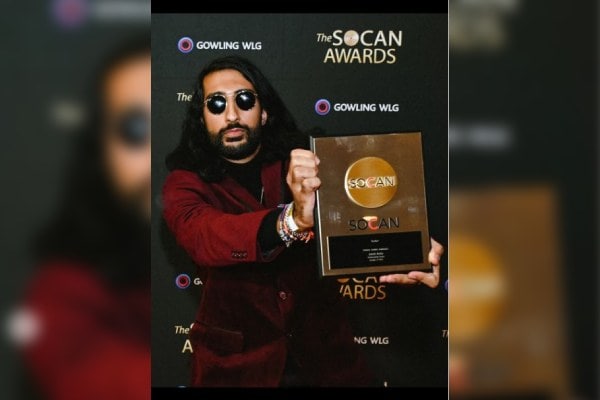 The musician seems to be entirely focused on his career as of now, and we are hopeful to meet Tesher's girlfriend shortly. Overall, Tesher transitioned from being a young, self-taught DJ spinning Bollywood music at events to producing mashups and original songs that generate significant earnings. Fans can't wait to listen to his new projects, and they are rooting for him.