How aware are you of LGBTQ+ artists? If you consider yourself ignorant, then what could be the reason? Is it because the representation of the LGBTQ+ community is significantly less to none in mainstream media? If so, then the narrative is on the verge of change as people are starting to talk about it more instead of shushing it away. There's been quite a stir and uproar regarding the topic, but it still isn't enough.

In this regard, we've come a long way but gone nowhere. The change has been there, but we still have a long way to go. Talking about queer community representation, Dua Saleh is a name you need to remember. Dua is an emerging singer-songwriter and actor who identifies as non-binary and is breaking the stereotypes. Saleh uses they/them pronouns. Keep reading until the end to know everything regarding Dua Saleh's net worth, Career, and early life.

Dua had an unusual childhood. They were born in Kassala, Sudan. Saleh's family became refugees during the second Sudanese Civil War, so they fled to the United States. At age 5, Saleh recalls they briefly lived in an Eritrean refugee camp and moved 17 times around cities like Maine, New Jersey, and more before settling in Minneapolis. Dua attended Saint Paul Central High School and later studied at Augsburg University. They double-majored in gender and sexuality studies and sociology.

During high school, Dua was very active and partook in various after-school programs. They were into city and urban planning and also worked as an intern. Saleh jokingly revealed that during their high school years, they didn't smoke or skate, but they became a stoner after moving out.

Dua also started writing poetry early and performed their first open mic during their senior year of high school. They got into spoken-word poetry in their sophomore year of college and even performed their original poem, "Pins and Needles" posted on Button Poetry's Youtube Channel. It has over 200K views as of January 2023.

Thousands of people loved the poetry, and Saleh has received tons of praise for Pins and Needles, which speaks on the intersectionality of LGBTQIA+ people. In addition, they have performed other spoken poetries which you can check on Button Poetry's channel.

READ MORE: How Supportive Was Clairo's Mother, Allie Cottrill, Regarding Her Musical Career?

Saleh began to morph their poetry into lyrics as they realized that poetry wasn't enough for sustenance. Initially, Dua didn't think they could sing, but something compelled them, and melodies started to flow naturally. Things happened effortlessly as the singer met producer Mike Frey through a mutual friend.

One thing led to another, and Dua came up with their first single, "First Take," on May 10, 2017. This is how Dua Saleh's career took off. Two years later, Saleh released their debut EP, Nūr, on January 3, 2019, and received critical acclaim for Nūr. Their next EP, Rosetta, was released in June 2020, followed by their third album, Crossover, in October 2021.

About Saleh's musical journey, they told GayTimes that they are no Megan The Stallion, but they've done pretty well for an indie artist. They look up to Megan Thee Stallion and consider her a rap legend, a queer icon, and a fellow anime nerd.

Saleh is the jack of all trades, as apart from being a fine singer, they are also a fine actor. You might know Saleh as Cal Bowman, the first non-binary character in the award-winning Netflix series called Sex Education. The reason for taking on a role as Cal was they had not seen many nonbinary characters depicted in their authentic selves. Sex Education's newest student think they wouldn't be as creative if they weren't non-binary, trans, and queer. But we beg to differ. 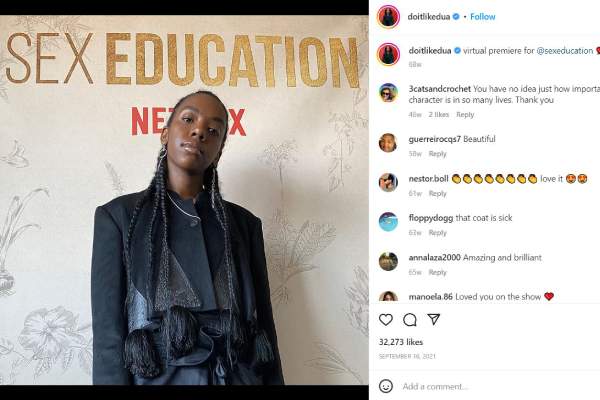 Hollywood is doing its part to include the non-gender specific person in conventional media, but Saleh pointed out that it still has a long way to go regarding representation. They also expressed how cool it is to have a non-binary-specific category because it's an umbrella term, and so many people fall under that category. Dua is doing her part to raise awareness and increase media presence for non-binary/trans/queer people in whatever way they find fit.

Another Indie pop singer-songwriter who represents the LGBTQ+ community is Marie Ulven, popularly known as Girl in Red.

The poet, singer, and actor have achieved a lot in such a short time. Dua has been in Vogue to Elle, from Youtube to Netflix, and from Spotify to people's hearts. They are doing everything and crushing it. They have earned a significant amount from all their involvement. Likewise, Saleh has earned a notable amount from her debut acting career after appearing as Cal Bowman in Netflix's Sex Education.

Regardless, no information regarding Dua Saleh's net worth has been found. But it is clear that the singer-turned-actor is earning a hefty sum of money and is using her creative talents to maintain a comfortable livelihood.

As a nonbinary, Dua talks about the need for trans people to be able to write, create, produce and be at the forefront of their own stories instead of being added on as an afterthought. Dua's gender assigned to birth is unknown, but alongside being non-binary, they identify as transgender as well. Saleh is thankful for having to be around trans and queer people. Their significance in representing the said community is indisputable. We eagerly await Saleh's return in season 4 of Sex Education.