Dave successfully realized his dream of becoming an astronaut while working as the chief pilot for Richard Branson's company. The former Royal Air Force (RAF) test pilot described the sensation of seeing the earth from the highest limits of the atmosphere as "awe-inspiring."

The Scottish explorer became the first navigator to steer a fully crewed flight to the edge of space. Consequently, many people are eager to learn how Dave was able to reach this milestone. If you are one of them, stick a little bit longer as we unfold Dave Mackay's biography and explain his journey till this point.

In 1957, Dave was born David William Donald Mackay in Scotland and grew up in Helmsdale, a small village in northern Scotland. Dave MacKay's father was a police officer and was very supportive of his son's dream.

Ever since Dave was a child, he wanted to be a pilot. His village in the Scottish Highlands was in an area where low-flying military aircraft were frequent. He remembers watching Buccaneers from the Royal Naval Air Station fly over the sea, through his village, and up the valley since he was five years old.

Early exposure to aviation fueled the Scottish astronaut's desire to become a pilot. In addition, he became interested in space after receiving a book as a reward for perfect attendance at school.

After witnessing the Apollo 8 mission in 1968, Dave was inspired to become an astronaut. Although Mackay was always confident in his ability to achieve his goal, he seldom told anyone about it for fear of being ridiculed. 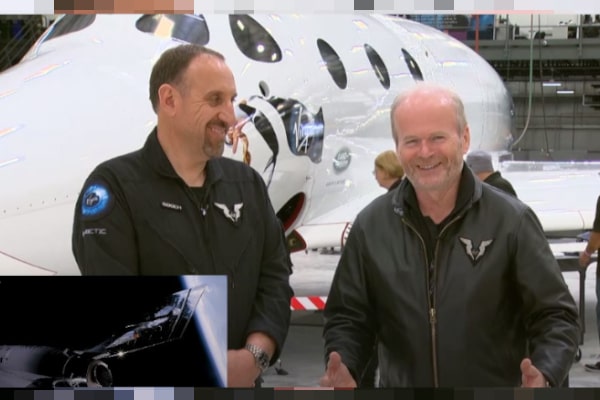 Dave Mackay (L) always dreamed of being the first Scotsman in space since he was a child. Photo Source: Social Media.

To attain his dream of being an astronaut, young Dave decided to imitate those astronauts on the Apollo 8 mission. He aspired to be a pilot first, then a test pilot, and eventually, apply for the position of an astronaut on the space station. He even addressed a letter to Duncan Simpson, Hawker Siddeley Aviation's Chief Test Pilot at the time, asking how he could become a Test Pilot.

Furthermore, Mackay was dedicated to his dreams from childhood and planned accordingly. As such, after finishing high school, he traveled to Glasgow to study Aeronautical Engineering attending the University of Glasgow. During his time there, he learned to fly through membership of the University Air Squadron, which was run by RAF.

Dave has flown over 140 different aircraft in his career and has over 14,000 hours of flight time. He has carefully crafted his steps from growing up in the Scottish Highlands to becoming Virgin Galactic's Chief Pilot and the first Scot to travel in space.

Prior to applying for the position of an astronaut in Virgin Galactic, Dave made multiple stops to decorate his resume with experience and awards. Let's take a quick look at his career background before he was authorized to pilot a spacecraft.

After learning to fly at the University of Glasgow and flying his first aircraft in 1977, Dave joined the RAF in 1979 with the prime motive of gaining minimum experience to apply for test pilot school.

Dave completed his basic training in the RAF, which takes about three years. Nevertheless, the Scottish pilot did further training so that he could learn to fly the Harrier GR3. He flew the aircraft for a couple of years in Germany and the Falklands. He was engaged with the RAF for about seven years before finally deciding to apply for the test pilot school EPNER in France.

Dave was selected for test pilot training at his first attempt in 1986, and two years later, he graduated from the French test pilots' school.

Following his graduation, the Scot was appointed Commanding Officer of the RAF's Fast Jet Test Flight. During his time here, he was in charge of conducting trials on the Harrier GR7, the Sea Harrier FA.2, and the Tucano.

For Dave's continuous service in the RAF, he was awarded the Air Force Cross in 1992.

Dave left the RAF after 16 years of service and joined Virgin Atlantic in 1995. He became the Captain of the 747 fleets in 1999. He described the experience of flying Boeing 747s to be completely different than the Harrier, which he was used to. He also started to fly the Airbus A340 in 2002.

In 2009, Mackay joined Virgin Atlantic's sister company, Virgin Galactic. The Scot slowly climbed up the rank ladder and became the chief pilot of the company responsible for flying Virgin Galactic SpaceShipTwo. He co-pilots this spacecraft with another astronaut, Michael J. Masucci. The spacecraft can reach a height of 360,000 feet and a speed of Mach 3.5.

On 22 February 2019, Mackay attained his goal and became the 569th person to visit space while flying SpaceShipTwo. He was also the first Scotsman to do so.

Dave Mackay Net Worth And Earnings

The Scottish astronaut, Dave, has been engaged in the pilot profession for more than 40 years. From beginning his service at the RAF in 1979 to navigating spacecraft in Virgin Atlantic, the veteran pilot must have accumulated to massive fortune from his career.

Mackay served in RAF for 16 years, and although his income through his Royal Air Force is unknown, we can assume he collected hefty revenue considering his commanding position and title. Moreover, the average salary of RAF pilots is ranged from $50,000 to $108,000. Given Dave's experience and awards, his wages must be around the same scale. 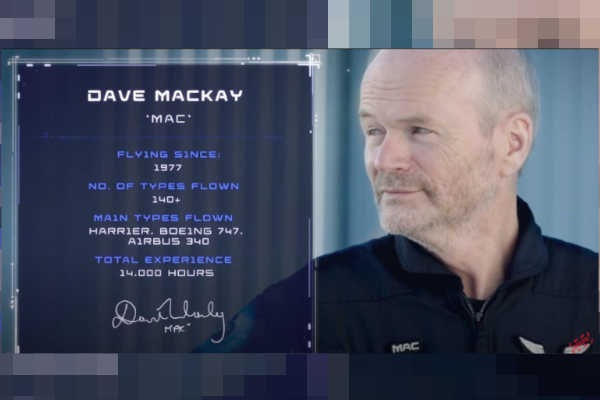 Dave Mackay must have amassed a sizable fortune from his profession given his experience and history in the aviation field. Photo Source: Social Media.

Besides, Dave is working for Virgin companies for more than a quarter of a century. As the Virgin company is funded by multi-billionaire businessman Richard Branson, it is safe to assume that the enterprise provides a handsome salary to its employees. Moreover, Dave being the Chief Pilot, his salary must be above the rest.

Although the exact figure of Dave Mackay's net worth is unknown and there is no data available regarding his assets, considering his long-term services and impressive resume, the Scot must have amassed a fortune worth millions. As for the Virgin Group's founder, Richard Branson has an estimated net worth of $ 5.4 billion.

The Scottish astronaut is very secretive about his personal life and doesn't have accounts on any of social media. Consequently, there is no mention of Dave Mackay's wife or children in any of his interviews or journal written about him.

Nevertheless, it is worth mentioning that Mackay has given more than half of his life to his profession. Moreover, he was focused on his goal and carefully planned his journey to reach this position. Therefore, it is possible that the veteran pilot didn't get time to start a family and have offspring. Even if he has a family, we should give him credit for keeping them away from the media limelight for so long.

Whether David Mackay is a family man or not lacks information, however, we can be sure that he is living up to his dream while navigating aircraft through space.