British singer-songwriter Calum Scott is not a new name in the music industry. Well, he is an exceptionally talented singer who has captured the hearts of many with his resounding voice. He can also play numerous instruments including drums, and guitar.

The singer rose to fame after singing Dancing on My Own by Robyn on the reality show Britain's Got Talent. Since then, he has put out his original music, which has been successful. Today, let's look into Calum Scott's biography and get to know him better.

Calum Scott was born to Kevin Scott and Debbie Burton, on October 12, 1988, in Kingston Upon Hull. Calum Scott's mother raised him alongside his sister, Jade Scott after his parents separated when he was just two years old. 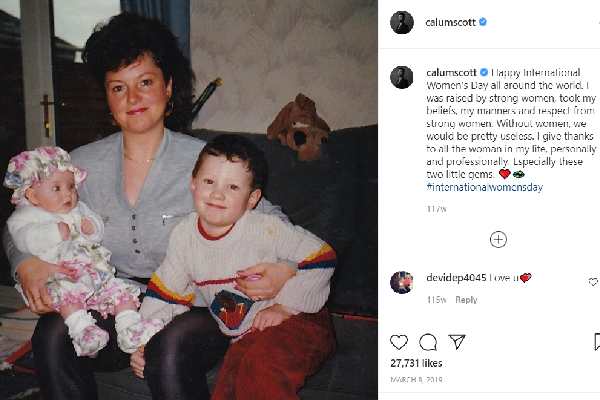 Calum Scott and his sister, Jade Scott, were raised by their mother after his parents' separation. Image Source: Calum's Instagram.

The certified platinum singer is remarkably close to his mother and sister. He often takes them with him whenever he travels and lets them be a part of his life as an artist. Moreover, his relationship with his nephew Oliver Calum is the sweetest. Scott is a doting uncle to Oliver, and he constantly showers the young boy with love.

Even though Calum had always had a beautiful voice, he was hesitant to pursue a proper career in singing. It was his sister, Jade, who encouraged him to sing and become who he is today.

Before dabbling in music, Calum Scott worked in human resources. He left this job to pursue a career in music after participating in the talent hunt show Britain's Got Talent.

With the desire to be noticed by some music executive and grow as a singer, Calum Scott participated in talent shows. In 2013, he won the talent show organized by Hull Daily Mail, Star Search. He won a cash prize of $1.4K (£1,000) and a photoshoot for winning the competition. He was also awarded a spot at TribFest and time in a recording studio.

The recruitment officer then participated in the ninth season of the famous TV show Britain's Got Talent. His sister auditioned before him, but the judges rejected her. Full of nerves, Calum performed a rendition of Robyn's "Dancing On My Own," which was loved by the audience and the judges. He received a standing ovation and the hardest critic, Simon Cowell's Golden Buzzer.

Calum Scott participated in the 9th season of Britain's Got Talent in 2015 where he won Simon Cowell's Golden Buzzer. Image Source: Calum's Instagram.

The Golden Buzzer catapulted Calum Scott straight to the semi-finale of the show. The audition clip of him singing "Dancing On My Own" has gained over 330 million views on the official YouTube channel of Britain's Got Talent. After placing 6th in the competition's finale, he traveled and performed in several shows and festivals around Britain.

Career As a Singer/Songwriter

Britain's Got Talent helped Calum Scott gain fame to massive heights. The song he performed during the audition was the main reason for his success. So, the British singer released his own version of the song independently. The song remains his most-streamed one ever.

Recognizing his talent, Capitol Records signed him as an artist in May of 2016. Calum Scott then released his debut album, Only Human, in 2018. The "No Matter What" singer is currently promoting his new era of music with the hashtag #YourLoveIs.

Calum also showed that he is a powerful songwriter with his debut album, "Only Human." The record is full of songs that portray his struggles with his sexual orientation, love, and how happy he is that his family accepted him for who he is. The album sold over 600,000 units and peaked at number 66 on the US Billboard 200.

With it being Pride Month, he might release music for the LGBTQ+ community. Calum's second album is rumored to be complete, and he is on the way to share it with his fans.

Calum Scott Net Worth And Earnings

Currently, there is no proper estimate of Calum Scott's net worth. However, with the singer's rising popularity and the sales of his albums and songs, his fortune is sure to grow.

According to Business Insider, Spotify pays between $0.003 and $0.005 per stream to the artists. With 441.1 million streams just in 2020, Calum Scott must undoubtedly earn a big buck from Spotify. Furthermore, he has also garnered millions of streams from other streaming sites and pockets a large sum. 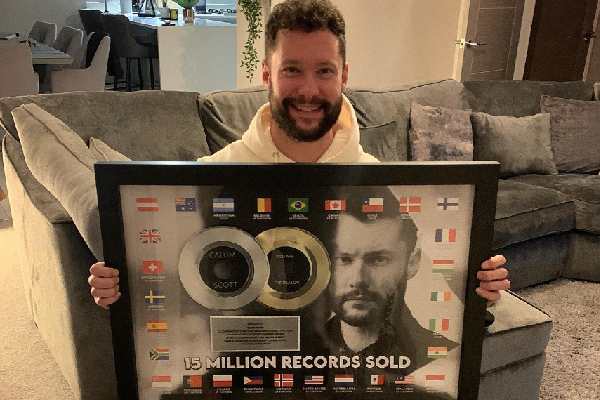 Calum Scott's net worth comprises of his earnings from streaming sites like Spotify and Apple Music. Image Source: Calum's Facebook.

The singer/songwriter releases music videos on his YouTube channel, which has over 5 million subscribers. To date, it has garnered more than 2 billion views in total. As per Social Blade, Calum Scott can make anywhere between $88.8K and $1.4 million per year through his YouTube channel.

Nowadays, it is the norm for celebrities to sell merch and other stuff on their website to promote their line of work. Similarly, Calum Scott also sells several items on his website as merchandise for his fans to collect. Here is a list of things that are available on his website alongside their prices:

With Calum Scott's new era in his musical career starting soon, there will surely be new merch dropping. The release of his new music will undoubtedly help raise the singer's fame and Calum Scott's net worth to newer heights.

Calum Scott is a handsome young man, and indeed there are many people curious about who his girlfriend is. However, Scott has been openly gay for years, and he came out publicly in an emotional video entitled "Calum Scott: A Coming Out Story."

In an interview with Gay Times, he revealed that he had struggled with identifying his sexuality and accepting himself as a teenager. However, the British singer was able to come to terms with his sexuality only after reaching adulthood. He now wants to live a happy life with a partner who understands him.

The British singer-songwriter is loved and accepted by his family. The song 'No Matter What' captures how his parents and sibling told Calum Scott that they loved him and want him to be happy no matter what his sexual preference is.

Calum Scott has remained mum about his current relationship status. Although there are reports that he has a partner, no one knows for sure who he is. Whoever Calum Scott's boyfriend is, we wish them all the happiness and love in their life.