Similarly, today's article revolves around the life story of the chairman, founder, and chief executive officer of Hilcorp Energy Company, Jeffery Hildebrand. Since many individuals are interested to learn more about this American billionaire businessman's personal and professional life, we have covered you with this short biography.

He Is A Self-Made Billionaire

The influential personality was born in 1959 in Houston, Texas, United States. He was welcomed by his father, Thomas Glenn Hildebrand, and his mother, Ruth Ann Schilling Hildebrand. According to the Houston Chronicle, Jeffery Hildebrand's father was a veterinarian who was the owner of an animal hospital near the airport.

On the other hand, the multi-billionaire's mother was a pilot who won the cross-country Powder Puff Derby. Sadly, she died in a crash during the Angel Derby Air Race in 1974. Furthermore, Jeffery has two stepsisters, Simona Toliver and Daniela Lankford, and one brother, Brad Hildebrand. Although Hildebrand Jr's upbringing is unknown, he must have had a wonderful time growing up.

Although the Houston native doesn't come from a family of billionaires, he worked hard in his school and college days and has now become one of the wealthiest self-made billionaires in America. It is undoubtedly an inspiration for all of us.

Jeffery's fortune primarily comes from his company and several other business endeavors he has been involved in. According to Hilcorp's spokesperson Justin Furnace, he is the company's sole proprietor. Hildebrand co-founded Hilcorp Energy Company in the late 80s and later bought out his partner in 2003 for $500 million.

Furthermore, according to estimates from an energy industry consultant, Hilcorp produced 345,000 barrels of oil equivalents per day in 2020. Similarly, as per the company's official website, Hildebrand also controls 6,000 miles of oil and gas pipelines through Harvest Midstream.

Moreover, before founding Hilcorp, the multi-billionaire worked as a petroleum geologist for the American Energy Capital Corporation, Exxon Company, and the Dan A. Hughes Company. Similarly, as of November 2022, Jeffery Hildebrand's net worth is estimated to be $12.2 billion, and we can surely expect his fortune to increase in the coming years.

Apart from this, Jeffery is also an active member of several organizations and associations. He is a member of the University of Texas at Austin's Engineering Advisory Board, All American Wildcatters, the National Petroleum Council, the Houston Energy Finance Group, the Louisiana Independent Oil and Gas Association, and the Texas Independent Petroleum Royalty Owners Association to name a few.

The billionaire businessman is not just wealthy in fortune but also rich at heart. He has made several charitable contributions to the Contemporary Arts Museum Houston and the Houston Zoo. Moreover, in November 2017, Jeffery contributed $25 million to the University of Texas at Austin's Department of Petroleum and Geosystems Engineering. Furthermore, Hildebrand donated $50,000 to Rick Perry while the latter was campaigning for governor.

Nonetheless, with such hustle and a well-earned fortune of $12.2 billion, Jeffery surely must be satisfied with himself and is leading a comfortable lifestyle. He has also made several investments in properties. For instance, in Aspen, Colorado, Jeffery owns a 1,000-acre property that musician John Denver once owned. Besides, he also purchased an 11,271 sq. ft house in 2011 on a 200-acre estate for $13.25 million.

Every successful relationship is built on a foundation of compassion and emotional support. Being a supportive partner is paying attention to, assisting, and supporting your other half so that they know you're there for them no matter what. The same is true for the self-made billionaire Jeffery.

Hildebrand is a supportive and loving husband who has always been there for his spouse, Melinda Hildebrand. Although the wedding details of the duo haven't been revealed on the net, they have been together for over three decades.

Furthermore, Jeffery Hildebrand's wife currently serves as the Vice President of Hilcorp Ventures Inc. and Vice Chair of the Hildebrand Foundation. In addition, she is also the owner and president of River Oaks Donuts in Houston, Texas.

Also known as Mindy Hildebrand, she serves on several boards and committees, such as the University of Texas at Austin - Development Board, the University of St. Thomas, Houston- Board of Directors; and is the President of the Memorial Park Conservancy Endowment.

In addition, the couple does several things together and has been involved in many charity endeavors. Nonetheless, the duo appears to have a long-lasting and thriving marriage, and we hope their love continues to grow stronger.

The multi-billionaire has surely not made any compromises while raising his kids and has made sure they get access to the best education and comfortable lifestyle. Jeffery is a loving and proud father of three children.

Alongside his wife, Mindy, the Hilcorp CEO welcomed his first son, John Thomas Hildebrand, on December 1, 1997, in Houston, Texas. He played football for the Texas Longhorns Football. However, not much is known about the business mogul's second son, Jeffery Hildebrand. Nevertheless, he might be currently studying and prioritizing his studies.

Similarly, Jeffery Hildebrand's daughter, Brittany Ann Hildebrand, was born on July 9, 1991, in Houston. She is a Texas A&M equestrian team alumna who operates in Wellington out of her own Hillington Farm. Moreover, Brittany has been actively horse riding for 11 years. 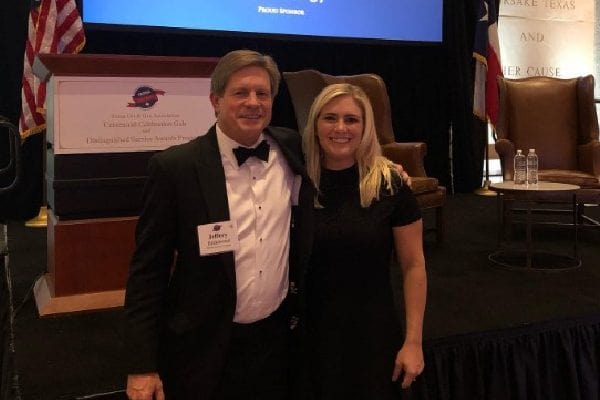 Overall, we hope all the Hilcorp Energy Company CEO's children will always remain healthy and happy. Our best wishes go their way.

Overall, Jeffery Hildebrand is a savvy businessman, a devoted spouse, and a proud father. His personal and professional lives are balanced, and we wish him the best of luck in all of his future undertakings.