Coming from an affluent family doesn't always mean their future generations will also get to enjoy family fortune. August Busch IV knows this better than anyone, as his family company was sold right under his watch. August's great-great-grandfather, Adolphus Busch, founded the brewing company Anheuser-Busch which was later passed down to his descendants.

The Buschs were ranked among the wealthiest American families, thanks to the profits from the brewery. Unfortunately, during Busch IV's tenure, the company was acquired by InBev. So, what has he been doing since then? Has he started a new business? We will try to answer all these questions in this biography of August.

His Parents Divorced When He Was Young

The business mogul was born August Adolphus Busch IV on June 15, 1964, in St. Louis, Missouri, USA. As already mentioned, he comes from a business family started by his great-great-granddad Adolphus. Moreover, August Busch IV's father, August Busch III, served as the CEO and chairman of Anheuser-Busch for nearly three decades. However, it is said that the dad-son duo mostly share a professional relationship.

The businessman's parents separated when he was only five years old. Afterward, his father remarried Virginia Busch and welcomed two kids with her. On the other hand, August Busch IV's mother, Susan Hornibrook, leads a quiet life, and it is not known whether she too remarried. August grew up with his sister Susan Busch-Transou and mostly lived with their mom.

Talking about his education, Busch is a graduate of Parkway West High School. Later, he earned his Bachelor's and Master's degree in finance and business administration, respectively, from Saint Louis University. Additionally, he also received a brewmaster's degree after completing a six-month brewmaster course at German's Versuchs- und Lehranstalt für Brauerei.

Had A Car Accident In His Late Teens

August Busch III's son was born in a wealthy household, but, his life has been plagued by intrigue and scandal from a young age. He first made headlines after being arrested at nineteen. At that time, the cops arrested him after finding his driver's license in a car accident location where its passenger Michele Frederick was found dead.

Afterward, it was found that the teen was driving the car on the road in Tucson, Arizona, which crashed, resulting in the death of Michele. He then left the scene without informing anyone. Moreover, the Pima County Attorney's office announced it wouldn't press any charges against August, also called, The Fourth. He was found driving within a speed limit at the time of the event, and there wasn't enough evidence to support any homicide charges.

However, it was just the start of The Fourth's headlines-making streak, he was again arrested several years later for a different reason. His professional life took a downfall, and his marriage also ended. We will talk about all these in the following sub-headings.

The businessman first started working as a brewing apprentice at Anheuser-Busch in 1985. After a few years, he ascended to lead the brewery's marketing division. The young man excelled in his new position and was promoted to vice president of brand management and marketing in 1994 and 1996, respectively.

August launched several ad campaigns during his career in marketing. Among his multiple campaigns, advertisements for Budweiser beer, the Budweiser Frogs, were named most popular by USA Today. Similarly, his created Wassup?, I Love You Man, and other ad campaigns were also memorable. Busch IV even won the Advertiser of the Year award in 2001 at the 48th International Advertising Festivals.

In 2001, the SLU alumnus ascended to the president of Anheuser-Busch. In 2006, he was named the CEO of the brewing firm. Under his reign, he played a vital role in launching Bud Select, Michelob Ultra, and Bud Light Lime, products that continue to thrive even today. He also purchased the naming rights to Busch Stadium.

Sadly, The Fourth's days as the company's CEO were cut short after InBev acquired the rights to Anheuser-Busch for $52 billion. Though he was against the deal, his dad and majority shareholders voted for the takeover. Following the merger, Busch IV sat on the board of directors of Anheuser-Busch InBev.

As per WY Daily, the former CEO received $10.35 million, with additional fees of $120K monthly from the deal. According to ST. LOUIS POST-DISPATCH, he made $100 million from the sale. Furthermore, August left the Anheuser-Busch InBev board in 2011, and it is not known what he is involved in these days.

Nonetheless, the businessman must be doing well. While Forbes estimates the Busch family's fortune to be $17.6 billion, August Busch IV's net worth must also be significant.

Who Is August Busch IV's Wife?

When talking about Busch IV, one can never miss his extravagant playboy lifestyle. So, when he announced he was getting married to Kathryn Thatcher, a native of Fairlee, people were definitely surprised. Many tabloids called it his move to get the CEO position of his family brewery.

The then-pair got married on August 5, 2006, in Bradford. They had a grand wedding reception, which also consisted of Cylesdales carriage entry. Furthermore, August Busch IV's then-wife is a grad of Boston College. She is now working as an account executive at UKG.

Sadly, the couple's marriage couldn't last more than two years. Around the same time takeover of InBev was completed, Busch and Kate Thatcher divorced on November 26, 2008. The former lovebirds didn't share any children together. 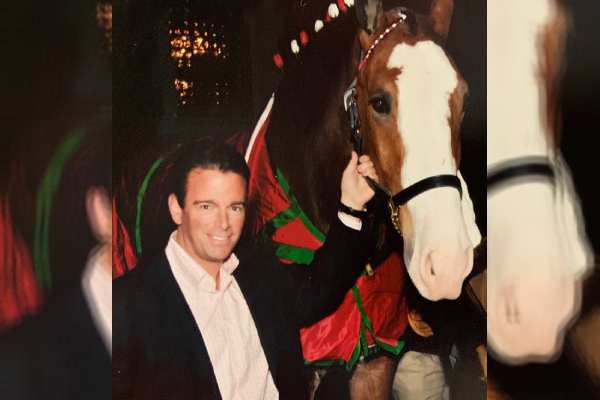 Then, Busch IV began dating Adrienne Martin, but she was later found dead at his home in December 2010. Moreover, Martin's ex-husband filed a wrongful-death lawsuit against August, for which he paid $1.75 million. Afterward, he maintained a low-key profile until July 10, 2017, when he was detained for allegedly trying to pilot a helicopter while intoxicated.

At that time, it was found that August was joined by Dawna Wood, who claimed she was August Busch IV's wife. But, as per Post-Dispatch, the duo is not legally married though they consider themselves as such, having been in a relationship for a long time. Unfortunately, much about Wood and Busch's relationship remains scarce, as they are both secretive.

Nevertheless, Busch IV hasn't had any other legal trouble since the 2017 incident. He must be living comfortably with his partner. After all the company takeover, relationship drama, and legal battles, his choosing to maintain a low profile is, in a way, understandable. Still, we wish him happiness and prosperity in his life.