If you are a fan of the Bare-Knuckle Fighting Championship, then odds are you might be familiar with James Lilley and his incredible skills. The talented fighter has been active for a while and has gained massive fame and popularity by winning many matches. He currently competes in the lightweight division of BKFC.

Although, with a professional career like an open book, James has much to share about himself. So here is a short biography about James and learn more about the iconic MMA fighter's family, career, BKFC stats, love life, etc.

Has Been Boxing Since An Early Age

The BKFC fighter was born on November 14, 1986, in Wales. He has had a keen interest in fighting and writing from an early age. As a young guy, he was into kung fu due to his liking for Power Rangers and Bruce Lee films. Later, Lilley stumbled upon boxing in his early teenage years which later turned into his lifelong career.

During the interview with ACE Podcast Nation, the fighter revealed that he loves football. But, since he was not good at playing it, he instead managed some football teams. However, his passion for boxing won over and he started reading boxing magazines as well.

As a result, James Lilley's mother has still kept his extensive collection of boxing magazines. Also, the former is a big fan of Lennox Lewis and followed his career from 2000 onwards.

Apart from that, he has not disclosed his other personal details including his parents' names and siblings. Adding to James' academics, he went to Olchfa School.

How He Rose To Fame

As mentioned earlier, James has been in the fighting world for more than a decade now. In all these years, he has been doing so much hard work. Formerly, he participated in more than seventy amateur fights.

Similarly, he also defeated Scott Mchugh at BKB 21 and that also boosted his fame amongst his fans.

Not only victories, but he has also faced big losses against Oban Elliott, Johan Andersson, Tobias Harila, Konmon Deh, and so on. Now, without further delay let's dive into his net worth and career.

James Lilley Net Worth And Career

James Lilley's net worth is heavily influenced by his fighting career. His fortune comes from his multiple matches and sponsorships.

As stated earlier, the talented personality made his professional debut in 2008 at United Kingdon Regional against Ricky Crocker. The following year, he fought against Mark White and recorded a victory in his name. Later, he switched to Budo Fighting Championships and debuted in 2017 against Jack Scott. Since then, he has fought against many fighters. So, let's take a look at his winning fights record:

We can see in the above table that he has won many matches. Looking above data, he might have cashed considerably. In 2022, he switched to BKFC and debuted after a few months against Adam Pellerano. He defeated his opponent in a few minutes. On August 20, 2022, he fought against Tyler Goodjohn and defeated him at BKFC 27 London.

According to sportskeeda, for a low-end BKFC match, a fighter was paid $2,500 as of 2020. However, many well-known athletes in the Bare Knuckle Fighting Championship claim that their salaries are higher than others. Hence, James Lilley's net worth must be considerable including his paycheck. Jim Alers is another fighter who has immense fortune.

Many people know James as a fighter, but do you know he is already an established writer as well? When James was nine years old, he wrote a poem during his field trip and gave that to his teacher. The poem was later published in the paper, and at the time he discovered that he was good at writing.

Since then, he has been writing and performing his poetry. He has hundreds of pieces that are published in magazines, anthologies, and countless websites. Interestingly, he finds writing words is a much more challenging experience than knuckling up.

Following his fighting venture, Lilley came into the limelight. Plus, people must be wondering if he has someone special. Well, yes! he is a family man. The talented athlete is happily married to a beautiful lady, Stacey Lilley, and has been together for many years and facing every hardship life throws at them together.

However, little has been revealed about James Lilley's wife and their wedding. It seems that they are having a blissfully marital life away from the spotlight. As a result, the information regarding their wedding and first meeting remains scarce.

Whereas, being married for so many years, his wife seems to be against his fighting career. As per Walesonline, Stacey, his mother, and his nan want him to pack off from the fighting world as he comes home with bruises and wounds.

Nonetheless, the duo appears to have a happy and enduring marriage, and we wish them the best as the year progresses.

Is A Proud Father Of Three

The BKFC fighter is a dedicated and loving father to his three children. James Lilley's eldest daughter Isabella Lilley was born in 2014. Likewise, their second, Ruby Elizabeth Lilley, was born in 2016. Both of his daughters are super cute. Then James and his wife, Stacey, welcomed their first son Tommy James Lilley in July 2019. 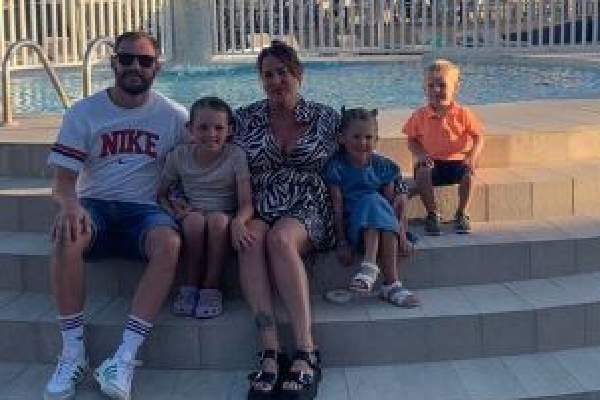 Likewise, James Lilley's children are young, growing, and lucky to have a father like him. He is raising his kids with love, dedication, and compassion and has always set aside time for them. From his Instagram posts, we can see he often goes out with his children on vacation.

All in all, the talented athlete must live a comfortable life with his family. Many fans are eagerly looking forward to his upcoming matches in the BKFC. Finally, let's hope James becomes even more success ahead.