Victor Fontanez, aka VicBlends, is a successful celebrity barber and entrepreneur. He is one of the well-known barbers in the barbering world and has established an impressive reputation for his work ethic and passion. In addition to his online academy, he also takes pride in being a motivational speaker and influencer.

Did you know that he fell in love with the art of barbering during his first haircut? VicBlends is among the most in-demand celebrity barbers, and his popularity is growing continuously. In this short biography, learn more about his inspirational life journey.

All About The Hustle

Vic was born in 2000 and grew up in Fayetteville, North Carolina, with his three siblings. He felt inspired by the barbers who would cut his hair and their impact on the community. So, when his barber told him that learning to cut hair would make money for the rest of his life, Victor started his side hustle. It led Blends to start his business cutting hair from his mother, Svetlana Fontanez's garage while still in South View High School. After graduating in 2017, he went to FTCC Barber School.

Victor Fontanez's father, Mel Fontanez, is a military man who works as a Logistic Management Specialist at 21st Theater Sustainment Command in Kaiserslautern, Germany. Another member of his family who served in the Army is Vic's older brother, a civil engineering graduate. He also has an older sister, Jessica Fontanez, aka Jessica Cheshier who has a graduate degree in Nursing. Finally, the youngest of the Fontanez family is Victor's little brother Tony Fontanez, who graduated in June 2022.

Victor Fontanez Net Worth And Career

The Fayetteville native is an inspirational man in his 20s who began his career at a young age. A few years have passed since the starting of his business, and Vic has now grown from a local community barber to everyone's celebrity barber. So, Victor Fontanez's net worth must be commendable, considering his professional success and popularity.

However, Victor had to overcome many obstacles before getting to where he is today. First, it was not easy for the South View graduate to convince his parents that he wanted to take on barbering as a profession. Then, he had to move away from his hometown, family, and friends to fulfill his dreams. Well, Victor beat all the odds and worked hard to achieve his success today and created a 6-figure Barbership empire.

Talking about his social media platforms, Vic's Instagram is followed by 1.9M people. He also has a YouTube channel that has 1.36M subscribers. He gained fame with his TikToks and YouTube shorts, where he asks strangers to give them a free haircut through a conversation. His genuine talks and free service touched hearts all around the world. Moreover, his videos get millions of views. As per Social Blade, his estimated yearly earnings range from $35.9K to $574K.

In November 2021, the social media star signed with WME (William Morris Endeavor) for representation in all areas. The agency will support him in developing his brand and building business across non-scripted T.V., podcasting, brand partnerships, licensing, and many more. Previously, he was represented by A3 Artists Agency.

Victor has not forgotten his roots and the community he belongs to despite his fame and popularity. In December 2021, he organized an event that gave out free haircuts, toys, food, and clothes to the children in his hometown of Fayetteville. It was done with his expenses in collaboration with an NBA player Dennis Smith Jr.

Fontanez established Vic Blends Academy, a barber school for the younger generations. It has an online curriculum. In addition to that, he also launched the first licensed barber school in California Prison. The program was created by Victor along with producer and social justice advocate Scott Budnick to allow the prisoners to obtain their barber's license while incarcerated. It would be helpful for them to start a new life after release.

Considering his list of celebrity clientele, businesses, and social media popularity, Vic must be amassing fortunes. In a short period, he has created a thriving profession that started as a teenage dream. Therefore, Victor Fontanez's net worth must be tremendous. Similarly, LeJuan James is another social media influencer with massive earnings.

Is Dating A Hairstylist

The celebrity barber's talent and passion for barbering have established him as one of the most desirable individuals in Hollywood. Many people must be eager to know more about his personal life, relationships, and girlfriend. In this case, Victor is not shy to show off his love life with his lover. He has shared adorable pictures and videos of her on his social media accounts.

Regarding popularity, Victor Fontanez's girlfriend Kayte Portillo has 25.4K followers on her Instagram account. She is an L.A. girl who creates social media content related to fashion, health, beauty, and home. She works as a hairstylist, just like her boyfriend. Nonetheless, it seems like the pair is deeply in love. Looking at their TikToks, YouTube videos, and Instagram posts, the lovebirds' relationship is thriving beautifully. The couple does not have any children yet. 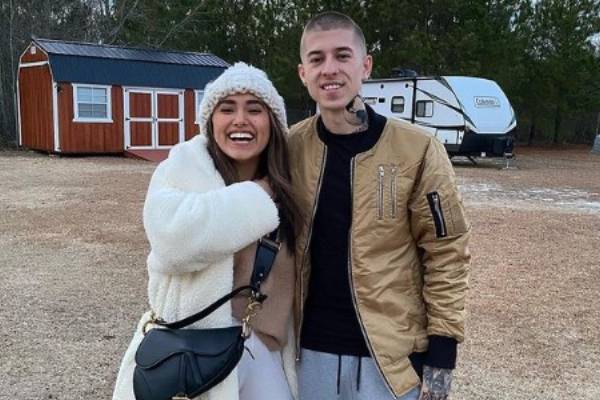 A barber by profession, the socialite entrepreneur, is focused on building his brand, inspiring others, and giving back to his community. It all started for him in his mom's garage as a side hustle but now teaches the art of being a barber in classes, online and in-person. Futhermore, Victor's passion is not just for barbering but for people as well. He aspires to make a difference in people's lives by using his voice. We wish him the best in his future endeavors.