Sinqua Walls is an American actor who has played in several TV shows and movies. Image Source: Sinqua Walls's Instagram.

Sinqua Walls is an emerging American actor. The young Hollywood talent has appeared in several films and Television series. Popularly known as 'Daniel' from 'The Secret Life of the American Teenager,' the 6 foot 3-inch actor is one of Hollywood's prominent aspects.

With growing popularity, Sinqua Walls's biography has been a crucial topic for his fans who are eager to know about the stars' life. Let's peek into the actor's career highlights, net worth, and relationships.

Sinqua Walls was born as the third child of his parents in Louisiana, U.S., on April 6, 1985. After spending some childhood years in his birthplace, Walls and his family moved to Marina del Rey, California, Los Angeles. He attended Beverly Hills High School and also El Segundo High School and later graduated from the University of San Fransisco with a BA degree. Walls played collegiate basketball for 'Cal Poly Pomona' and the 'University of San Fransisco.'

Walls aspired to be an actor from an early age. Even though he was a sportsperson during his college days, he always wanted to pursue acting as a profession. Walls' ambition became apparent when he memorized the film 'The Radio Flyer' from start to finish. After studying theatre and film as part of his art program at the University of San Fransisco, Sinqua pursued his childhood dream of becoming an actor.

Sinqua Walls's career began in 2007 when he got the chance to play a guest role as 'Desmond' in an American family drama series 'Lincoln Heights.' The same year, he played a short role in the film 'Choose Connor.' Next year, he appeared in an episode of NBC's comedy-drama series 'Chuck.' Walls was also featured as the recurring character 'Jamarcus Hull' in the nine episodes of NBC's sports drama series 'Friday Night Lights.'

Similarly, he starred in the horror film 'Shark Night' directed by David R. Ellis in 2011. He was also featured in several other TV series such as Grey's Anatomy, Necessary Roughness, CSI: Crime Scene Investigation, Teen Wolf, The Breaks. Also, he appeared in several movies like From the Head, Otherhood, The Second Half, and many more. Walls played the role of 'Marine' in Clint Eastwood's directed biopic 'The 15:17 to Paris.' He is currently playing the lead role in BET's drama series 'American Soul.' Portrayed as Don Cornelius, he plays the character depicting the famous American television show host and producer who created nationally syndicated dance and a music show 'Soul Train.'

Sinqua Walls's upcoming projects include 'Alice.' Directed by Krystin Ver Linden; the film depicts the life of a slave where Walls is seen as 'Joseph.'

Sinqua Walls's career started in the early 2000s. With a role in the movie 'Choose Connor', Walls was successful in getting subsequent roles over a time period. Here are his works in the big screen line.

Sinqua Walls's movie career has been an impressive batch in his resume. Besides, he has also worked in numerous TV shows.

With commencing his professional acting career in 2007, he also got a role in the famous TV series 'Lincoln Heights.'

Looking through his career highlights, Sinqua Walls has been gradually stepping up his game and performing in more extensive sets with prominent roles on some occasions. He has won several independent film festival awards for his outstanding performance in "The Second Half." 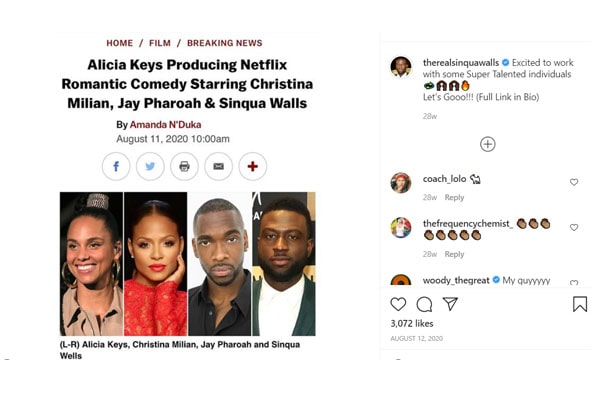 Furthermore, he has collaborated with Alicia Keys in an unnamed Netflix romantic comedy series that stars Christina Milian and Jay Pharoah.

Sinqua Walls has performed several iconic roles in several films and TV shows. He starred in The 15:17 to Paris, which turned out to be a commercial success biopic as it collected about $57 million worldwide which also had a production budget of $30 million. In 2011, he played in 'Shark Night' which had a box office collection of around $40 million on a budget of $25 million. Sinqua Walls must have bagged some hefty amount of income through these kinds of hits.

Although Sinqua Walls's net worth and salaries are yet to be revealed, some online sources claim he has a net value of around $1.5 million. And looking at his achievements, that seems like to be true as well.

Apart from acting, Sinqua Walls also has other hidden talents like poem writing. He is a published poet who often flaunts his arts into the beautiful rhyming of words. He is also active in social work campaigns where he works as an advocate to help the homeless and fight hunger in America. Going through Walls' social media accounts, he can be seen as a fitness freak. He maintains a healthy lifestyle and lifts weights to keep his body in shape. He also does podcasts on Soul with various other celebrities like Marcedes Lewis, Snoop Dogg, Condola Rashad, and many more. 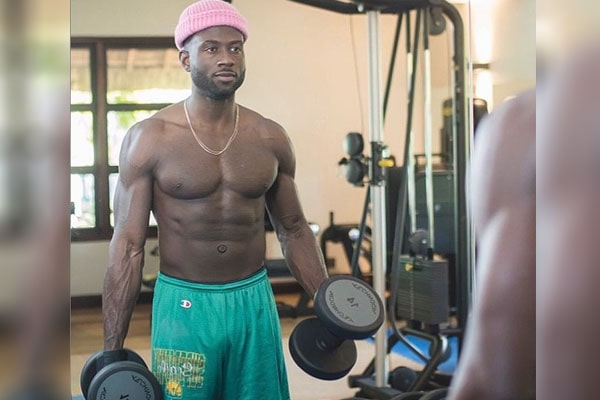 As for his relationship status, Sinqua Walls's relationships have not been confirmed by the actor. Maybe the American actor leads a quite secretive life. His dating histories and girlfriends are still a mystery to his fans. However, according to LiveRampUp, Walls is currently dating Nickayla Rivera.

Sinqua Walls' alleged girlfriend is a model for Elite Miami, Trump Models, and Photogenics Agencies. In June 2016, Sinqua and his model girlfriend were also spotted in a movie theater at the Grove in LA. The site further claims Sinqua Walls has been involved in a past relationship with the actress Naturi Naughton. Without any official confirmation by the actor, Sinqua's love relationship and girlfriends are something that his fans would love to know about.

'An Open letter to My Son's Father, Sinqua Walls' by Karisma Shackelford

Despite any confirmation by the actor, Karisma Shackelford claims that Sinqua Walls is a father to her child Sinqua Walls Jr. In a blog of GottaHaveKarishma, 'An Open Letter to My Son's Father, Sinqua Walls,' the writer narrates a heartbreaking story with a sole purpose to reunite with her partner Sinqua Walls and provide parental support to his son who is currently 15 years of age. The article further claims that the American actor has ignored his son's existence while the child constantly messages his father for just a short father-son time. 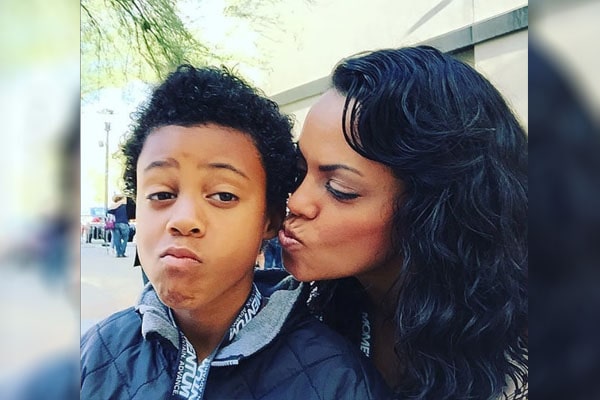 Was Sinqua Walls in a previous relationship with Karisma Shackelford, which led to the birth of Sinqua Walls Jr.? Did the actor shut his eyes to his son? Questions remain unanswered by Sinqua, but fans have been debating on the topic for a long time.