Named the Woman of the Year by California State's 70th district Assemblymen Don Wagner in 2012, Mindy Burbano Stearns is an actress and former entertainment reporter. However, she is also best known as the wife of millionaire businessman Glenn Stearns.

If there's one thing you should know about Mindy Stearns, it's that there's no single way to explain who she is. From being a wife and mother to an on-screen entertainer and an advocate of national parks, Mindy has had an enthralling life to date.

Hence, let's learn about the amazing lady in a little more depth through this article.

Grew Up In A Happy Household

Mindy was born in Gallup, New Mexico, on September 29, 1968. Mindy Burbano Stearns' parents are Eric Burbano and Joyce Burbano. Her father is a dentist who also spent a year in the US Navy.

The former reporter grew up with her brother Dr. Martin Burbano whom she also calls her BFF. The philanthropist often shares posts showing her gratitude to her family. 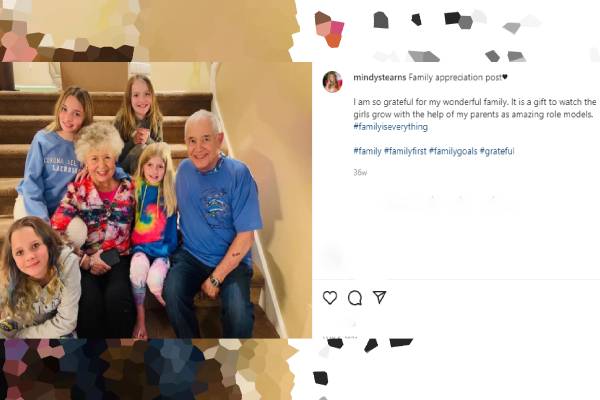 The above picture and its caption clearly depict her fondness and appreciation for her loved ones. Overall, Mindy was brought up in a happy and love-filled environment.

The New Mexico native has explored many professions throughout her career. Discovered and nicknamed, The Rooster Lady, by Oprah Winfrey, Mindy Burbano Stearns is mostly known for her part in The Princess Diaries. The movie went on to make $165 million at the box office.

Similarly, the other movie Dickie Roberts: Former Child Star, where the actress appeared as a news correspondent made almost $23 million worldwide. Hence we believe, Mindy Burbano Stearns' net worth, might be substantial all thanks to her endeavor in the movie industry. Glenn Stearns' wife has got nine credits as an actress in IMDb. 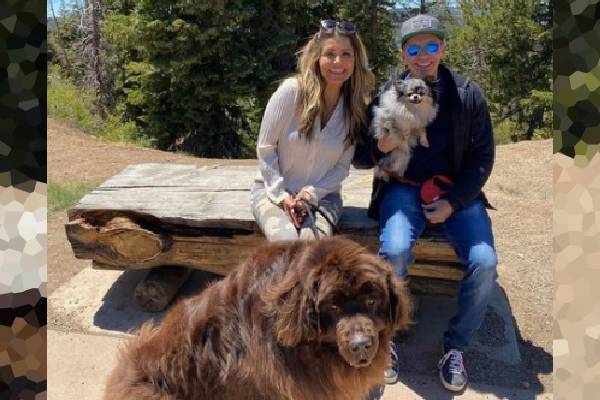 Mindy Burbano Stearns serves on the Board of Directors for the National Parks Foundation. Image Source: Mindy's Instagram.

Aforementioned, Mindy was also awarded as Woman of the Year, for her tireless efforts to raise awareness for various charitable organizations in Southern California. The wife of a real estate tycoon has rightly been honored for her talent and work as a philanthropist and activist.

That being said, Mindy's husband Glenn holds an estimated wealth of around $500 million. Hence, no wonder together the pair make a power couple.

In addition to being an actress and activist, Glenn Stearns' wife has worked as a morning radio DJ, reporter for various Los Angeles television stations. Hence no wonder, it all contributed to Mindy Burbano Stearns' net worth.

As much of the good deeds and hard work Mindy has done in her life, she is a good recipient of beautiful romance as well. She has been married to the millionaire Glenn Stearns for almost two decades now and there is a beautiful love story to it.

The television personality and the real estate tycoon first met in Las Vegas but didn't exchange phone numbers or names then. Glenn switched on the television the next morning to see that the girl he met the night before was Mindy Burbano, WB's entertainment reporter.

The businessman was instantly smitten and contacted her. The couple has been together ever since. Mindy and Glenn got married on October 11, 2003. 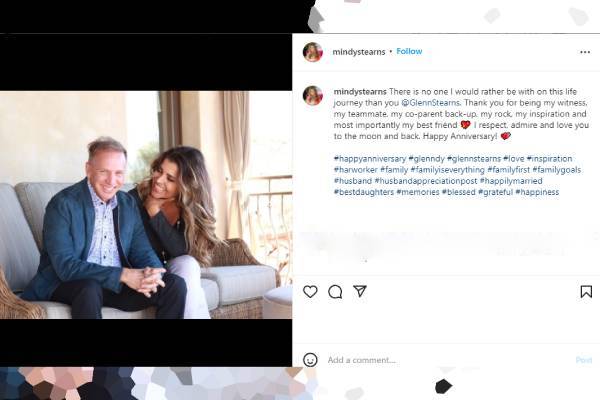 However, for Mindy Burbano Stearns' husband Glenn Stearns, it is his second wedding. Previously he was married to Amber Urone also known as Amber Stearns.

Is A Proud Mother Of Two

During the companionship and union of Mindy and Glenn, the couple has been blessed with two daughters. The pair named their children Taylor Stearns and Brooke Stearns. She often shares pictures of her little ones on social media. By the look of it, it seems Mindy Burbano Stearns' children are growing up in a loving environment. 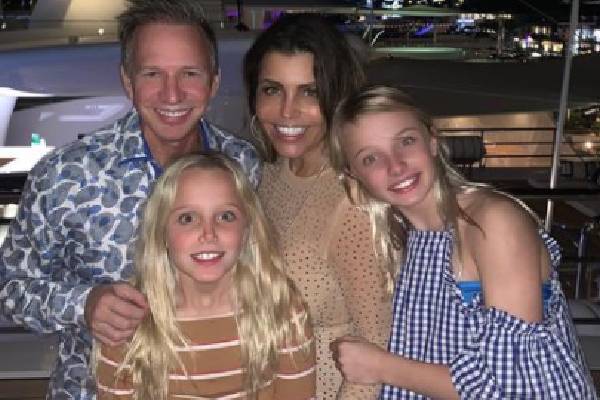 As we mentioned earlier, Glenn Stearns was wedded to Amber Stearns before. From Amber, Mindy's husband has three children, Skyler Stearns, Colby Stearns, and Trevor Stearns.

The former actress has another stepdaughter Charlene Stearns, who her husband had with his former relationship with a woman named Kathy. Thanks to Charlene's children the philanthropist couple are enjoying the bliss of being grandparents.

Apparently, Glenn's children also participated in the wedding ceremony of him with Mindy enthusiastically, making it a truly family affair. His eldest son, Skyler, was one of the best men, while Charlene was one of the bridesmaids. Trevor was the ring bearer while Colby served as a groomsman. A solitary rose was placed on a chair in the front row of seats to remember Glenn's beloved mother.

Mindy is most proud of serving as CFO, in other words, Chief Family Officer for the Stearns family, despite all of the honors and recognition she has gotten. Glenn Stearns' wife oversees a blended family of two young daughters, four stepchildren, and two granddaughters in her role as CFO.