Justin Lucas has competed in several championship and has won some of them. Image Source: Justin Lucas Instagram.

Justin Lucas is an America-born angler who is famous for winning two Elite Series events. Similarly, he has gained popularity as the 2018 Toyota Bassmaster Angler of the Year. In his career, he has won several championship titles like MLF Bass pro-Tour Champion and MLF Pro Circuit Champion.

There's no doubt that Justin has achieved significant success in his profession as an angler. Furthermore, he shares a blissful marital life and is a proud father of a son. For now, let's learn more about Justin Lucas's biography and professional career.

Justin Lucas was born in Guntersville, Alabama, on May 1, 1986, to his mother, Sally Lucas. Well, there's no information about his father, but he has a stepfather. Justin grew up with his two brothers Kevin Lucas, Joe Lucas, and an adopted sister, Lauren Reed, in Sacramento, California. Justin's brother, Kevin, is a golfer who is currently playing for Korn Ferry Tour. Similarly, Dustin's other brother, Joe, was once a mixed martial arts fighter. As for his sister, Lauren is a dental hygienist. 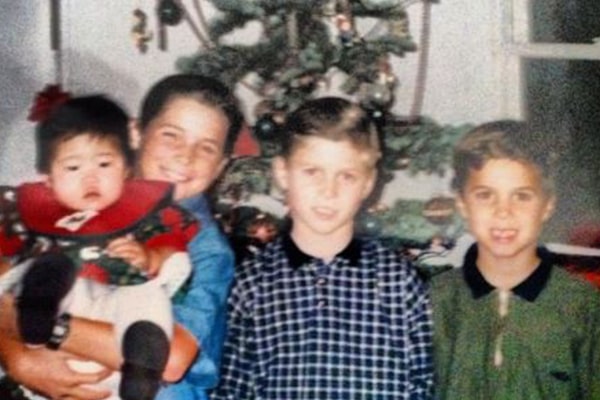 Justin credits the victory that he has claimed to his grandfather, Jack Schmidt. He used to take Justin to fish and even bought him a small Ranger boat with a 90-horsepower engine so that he could participate on a local bass tournaments circuit. Justin's grandfather had done some fishing previously. Jack even served as the caddie for Kevin and as the cornerman for Joe. Furthermore, Justin also has five younger adopted siblings, Marissa, Bryson, Gio, Gracie, and Laney. The Lucas siblings must have had a great childhood and are living their best life.

Speaking of the angler's education, Justin went to Folsom high school. He then attended a junior college for a couple of semesters and dropped out after winning his first big event as a co-angler.

Justin Lucas Net Worth And Career

Justin, at the age of 10, went catfishing with his friends. He was the only person who caught fish that day, and he fell in love with fishing. As stated earlier, his grandfather bought him a small Ranger boat to compete on a local bass tournament circuit. He fished his first tournament at the age of 13. He has competed in several Elite Series and has won some of them. In Justin's career as a professional angler, he has won several championships and tournaments.

There's no doubt that Lucas might have earned a huge sum of money. Justin Lucas's net worth might be in millions. Most of the wealth amassed by him comprises his income from tournaments and championships that he has participated in, prize money, and endorsement and sponsorship offer.

Here are some of the tournaments that Justin has participated in, the place he secured, and the money he earned through these championships.

Justin's career winnings are $872,592. Hence, Justin Lucas's fortune increased significantly over the years from the money that he received in several tournaments.

According to ZipRecruiter, an angler earns $43,922 per year as an average salary. Hence, he must have added a huge fortune to his name.

One cannot doubt that Lucas has accumulated immense fame and popularity as a professional angler. The popularity has resulted in various sponsorship and endorsement offers for him. His first major sponsor was the National Guard through FLW. Since then, he has been sponsored by various sponsors like Berkley, Yamaha, Phoenix Boats, BOLT, Tackle Warehouse, and many others.

Justin also uses his social media platform to promote several brands that he has signed endorsement deals with. Therefore, Justin Lucas's net worth must be of a grand sum. Thanks to his wealth, he is able to live a comfortable and lavish lifestyle. He lives a happy life with his family in Guntersville, Alabama.

Has A Beautiful Wife With A Kid

As mentioned before, Justin Lucas is a married man and shares a blissful conjugal life with his wife, BreeAnna Lucas. The beautiful pair of Justin and BreeAnna exchanged the vows on October 27, 2012. Their marital life is still going strong, and both of them are deeply in love with each other. They don't shy away from sharing their love for each other via social media. 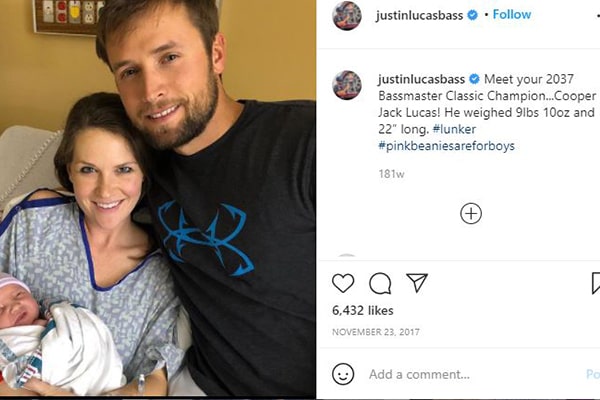 Justin Lucas shares a blissful marital life with BreeAnn Lucas and has a son with her. Image Source: Justin Lucas Instagram.

Five years after tying the knot, the beautiful pair of BreeAnna and Justin were blessed with a child. Justin Lucas's wife gave birth to their son, Cooper Jack Lucas, in November 2017. Lucas's kid weighed 9lbs 10oz at the time of the birth, and they shared the news via Instagram post. BreeAnna and Justin are raising their child with great love and care. As stated earlier, they reside in Guntersville, where they had moved from California. The adorable duo designed and custom-built their house of 2,200-square-foot and are doing great for themselves and are living a great life.