The angler is also the co-founder of Th3 Legends, which sells fishing gears to the public. Jimmy has also competed against other pro anglers in more than 83 Fishing League Worldwide events and 246 Bass Master tournaments. Jimmy Houston has been a professional in the FLW (Fishing League Worldwide) for more than 13 years. Let us know more about Jimmy Houston's biography and career.

Jimmy Houston, a Texas native, was born to his parents on July 28, 1944. He was raised by a single father, Jack Houston, in Moore, Oklahoma, where he grew up in a church. As a kid, he was taught various outdoor activities by his father, grandfather, and two uncles. His uncles were named Gene Houston and John Houston. The professional angler recalls his past by stating that his family took him fishing before he could even walk and hunting prior to him learning how to shoot. Much of Jimmy's most precious memories include adventures like catfishing trips in their aluminum boat on Lake Hafner, walking alongside the Washita River, and fishing in small lakes and pools.

Jimmy Houston attended the Moore High School but was always rushing home to fish after his father purchased a resort on Tenkiller. The area had many small lakes to fish in, which allowed the young enthusiasts to make his own money by selling his catch. Gradually, he collected enough money to pay for his college himself, just by selling the fishes he caught. The famous T.V. host thanks his late father for taking him outdoors for fishing and hunting while also teaching him about ethics and morals. His father was a game warden for 35 years before passing away in September 2013. The hunter feels very blessed to have spent a comfortable lifestyle with his father in God's great outdoors.

Speaking of Jimmy's education, he went on to study at the Northeastern State University and majored in economics and political science. He later graduated and continued to finance himself through various tournaments to build his career.

Jimmy Houston has a very successful career. He became obsessed with fishing after watching the older anglers compete in Sportfishing's tournaments in his hometown of Tenkiller. After learning the art of fishing from various professional anglers who came to compete in the World Series of Fishing, the young Houston developed his skills. Jimmy focused on his casting accuracy as he noticed its importance for fishing. In his early days, Jimmy has recounted his past experiences as very sad times. The angler had no money to eat outside or even repair his truck through a mechanic. Many times he had to win some money from the tournaments just to get back home. 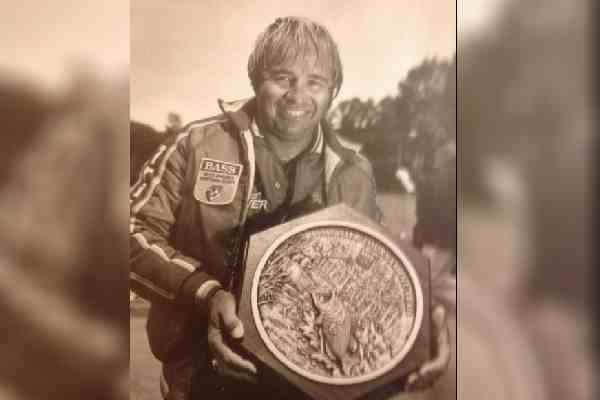 The professional American angler's first major tournament win dates back to 1966 in the Oklahoma State Championship during his senior year at college. He earned $6K from his first-ever national victory. Following his win, he was given a handful of Mr. Twister worms by John Fox of the American Angler Television Show, which helped him catch a lot of fish. The angler's career slowly began to shine, which also helped him have a steady income. Jimmy also started to sell his spinnerbaits, which he created in his backroom. Soon, his friend Sam Walton who was also an Oklahoma native, got his baits into Walmart. He also started his own T.V. show called Jimmy Houston Outdoors, which introduced him to a new stardom level. The show's success has made his family's name famous worldwide and helped him earn a grand fortune.

Alongside his thirty years on T.V., he also kept his focus on his fishing career. Jimmy Houston went on to clinch 15 Bassmaster Classics, the 1976 and 1986 B.A.S.S. Angler of the year titles. Jimmy is considered one of the most famous anglers in the Walmart FLW Tour to this day. His professionalism in the sport has led him to publish several books.

Jimmy Houston's books are titled Jimmy Houston Fishing Log, The Wit and Wisdom of Jimmy Houston, Catch of the day: Spiritual Lessons for Life from the Sport of Fishing, Hooked For Life, The Reel LIne: An Angler's Guide to Ultimate Catch, etc. Jimmy was later placed in the National Fresh Water Fishing Hall of Fame in 1990 for his career achievements.

Throughout the years, Jimmy Houston has built his career as one of the welcoming faces in the sport. He is loved by many people for his genuine approach and is one of the outdoor industry's true champions. His love for the fishing sport has kept him from retiring, as he is still seen in many tournaments. When asked about the reasons for competing at such an age, the professional replied about how the sport's been good to him for years and wants to pay back in any way possible.

According to Celebrity Net Worth, Jimmy Houston's net worth is estimated to be $6 million. The professional angler also has two decades of experience working in T.V. networks, including ESPN, Outdoor Life Network, and N.B.C. Sports. Jimmy's earnings have increased significantly after the success of his T.V. show, Jimmy Houston Outdoors. He developed 64 episodes for his outdoor channel, which is still broadcasted by various networks to this day. As stated above, he is also an author and has published a number of books. Some of them are listed below alongside their respective price.

He also co-owns Th3 Legends, alongside fellow anglers Roland Martin and Bill Dance, who are also professional fishermen and authors. One of his partners, Bill, has a net worth of $4 million. Their company specializes in selling Johnny's signature products, fishing rods, baits, sunglasses, and other gifts. Their products are also available in Walmarts across the United States. Last year, his company sold 160K units which have been a good investment for the professional. The revenue generated from the company is also a prime factor for the increase in Jimmy's net worth. Here are some of Jimmy Houston's products alongside their prices.

At the moment, Jimmy is focused on his YouTube channel and online mentorship programs. From his YouTube channel, Jimmy has estimated earnings of $2.3K - $37.2K per year and $194 - $3.9K every month. He uploads his fishing videos on his own channel and preaches his knowledge about fishing. He also holds meet and greets events during various tournament gatherings for his fans. With such an active career, Jimmy Houston's net worth is sure to increase even more in the coming years.

The American professional angler is currently leading a simple and perfect life. Jimmy Houston's wife is named Christine Houston. The lovely pair has been together for more than five decades and still keeps their relationship very strong. The attractive partners are both professional anglers who met during their high school year in 1961. Chris Houston was a dominant professional in the Bass'n Gal circuit for years after clinching the tournament's title seven times. Chris is considered a fishing legend herself while competing in every season to qualify for every classic throughout her career. She has won three classic tournament titles and was inducted into the Freshwater Fishing Hall of Fame in 1987. Jimmy Houston's partner Chris Houston is the first woman who got voted into the Bass Fishing Hall. 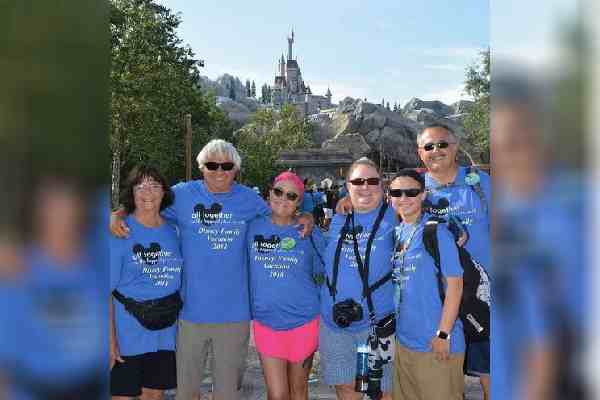 Houston and Chris Houston have two children. They are named Jamie Houston and Sherri Houston. Their family has since grown larger, as the professional angler couple has now become great grandparents. Jimmy Houston's two children have already married, and from them, the Houston pair have three grandkids and seven great-grandchildren.

Jimmy Houston's daughter Sherri has also followed in her parent's footsteps. She competed alongside her mother, Chris, in her first Bass'n Gal at the age of sixteen. Her father has praised her game to be even better than his mother, whom he proclaims is a better angler between them. Jimmy Houston currently resides at his ranch in Oklahoma with his wife.

The Houston family has taken care of more than just one species of mammal inside its ranch. The family has also welcomed a pet deer inside their homes after the kind family rescued a new-born fawn without a mother. Chris Houston had noticed the orphan deer following her dogs and herself before it rested upon some flower beds. Jimmy was returning from a tournament when he received a call from his wife regarding the orphan fawn. However, the next morning, when the author headed towards the lake to fish, he noticed the fawn lying under a tree. Jimmy quickly called his wife and asked her to purchase some milk supplement for the wild deer. With laborious love and care, the deer soon recovered and made Houston's ranch its home. The couples decided to name the deer "Lucky Lucy" after its lucky escape from death. 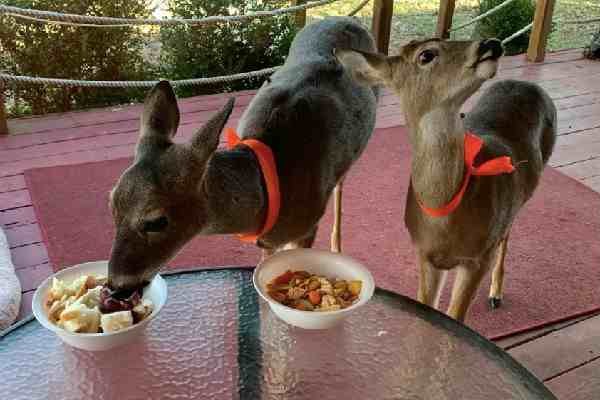 As Lucy grew older, so did her needs. Jimmy and his wife feed Lucky with some very delicious meals with a mix of cookies, vegetables, fruits, and even grapes. Jimmy has also shared that the deer loved the grapes, which surprised him. The family was also concerned with coyotes responsible for more than forty percent of deer killing by wild animals in his home state. Though concerned for her safety, the family has decided not to enclose her in any way. Lucy loves her freedom and is free to roam anywhere within the ranch. The family loves the deer as one of their own children and has shared its story on their YouTube channel. Like her human counterparts, Lucy started dating another deer from around the area back in 2019. Today, the deer rolls with her own herd and has a family of her own.

The TV personality owns a 2000-acre land in Oklahoma, a home to Oklahoma fishing, while his father owned a resort in Tenkiller. Though the rich professional angler's ranch is a beautiful piece of land covered with lakes and green lush forest, the ranch's price is still not disclosed to the public. With the help of his fortune, Jimmy has been able to purchase some nice vehicles for himself. The TV host owns a number of offroad trucks, cars, and riverboats. Jimmy loves to cruise around on his boat at his lake and fish to spend his time.

When the fishing guru is not on his ranch, he is either competing with other professional anglers or just helping others out. Jimmy Houston is known for his philanthropic works. He has helped raise money for charity on several occasions, including donating and raising money to find a cure for cancer. One of his heart-wrenching moments includes the death of one of his young fans. Houston was approached by a director of Make-A-Wish-Foundation, who informed him about a youngster who was dying of cancer. He had also lost his father in an accident. The boy had a wish to go fishing with Jimmy Houston. Sure enough, Jimmy picked the boy up in a helicopter and went on a fishing trip with the boy and his son. Though they only managed to catch a little fish that day, Jimmy recalls the boy's face, which was still full of excitement. Sadly, the young boy died six-weeks after their fishing trip. Jimmy recalls his conversation after their phone call. The professional angler said the boy shared that he was going on a saltwater fishing trip soon on his last conversation. Stories like this show that Jimmy Houston has a generous heart.