Eve Hewson is the star of Behind Her Eyes. Image Source: Eve's Instagram

As the kid of an 80s rockstar, some might feel as if life for Eve Hewson would be a walk on a field of flowers. The Irish actress and daughter of the lead vocalist of the band U2, Bono, is more ambiguous than people might perceive. Some would suspect her to take after her father and pursue a music career, seeing how her father could have gotten her into the business seamlessly. Going on her own, Eve pursued a career in acting and has been a bastion of hard work since 2008, though she tried forming an amateur music band with her teen friends during the early 2000s.

The charismatic and glamorous actress has slowly but surely moved up the ladder of Hollywood via her incredible acting chops. Throughout her career, Bono's daughter Hewson has worked with an excellent code of conduct and discipline, which has led to her being a very likable personality in Hollywood. Despite being born into a rock and roll royalty, Eve Hewson has remained untethered by her father's fame and stayed as humble as possible.

Memphis Eve Sunny Day Iris Hewson entered this world on 7th July 1991. She was born into a family of a music rockstar and a social activist. She was born to mother Ali Hewson and father Paul David Hewson (Bono) in Dublin, Ireland. Eve Hewson is one of Bono's four kids. She's the second kid in the family, and her older sister Jordan Hewson, born on 10th May 1989. Her two younger brothers, Elijah Hewson and John Hewson were born on 17th August 1999 and 21st May 2001, respectively.

Eve got her primary education from the Dalkey School Project and St. Andrew's College while living in Dublin. Eve cherishes the fact that she grew up in Dublin despite having options of living in Los Angeles. She moved to New York to attend New York University to complete her bachelor's degree.

Following her studies, Eve got involved in acting and has not looked back since.

Eve Hewson made her break in Hollywood through a Patrick Fogarty movie, The 27 Club. She portrayed the character of Stella in the movie. Similarly, Eve has appeared in movies such as Blood Ties, Robinhood, Paper Year, and the Steven Spielberg drama thriller, Bridge of Spies. Her small portfolio since the initial days of her career is expanding at a good rate as she keeps displaying her talent in all the projects that she's been a part of. 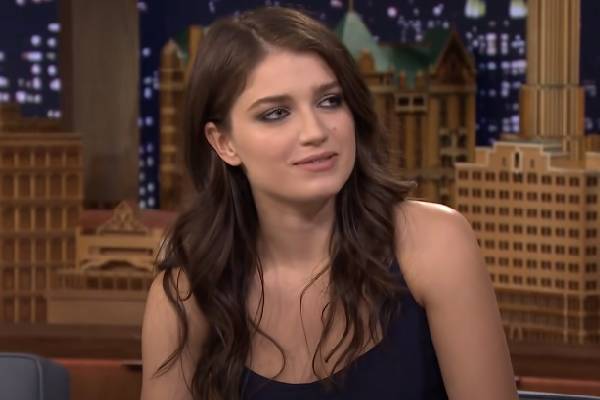 Eve Hewson made her big-screen debut in 2008 with the movie The 27 Club. Image Source: Social Media

Eve Hewson has also been a part of three TV series. But her few silver screen projects have been of substantial size. She portrayed the character of Nurse Lucy Elkins in the 2014-2015 series The Knick. In 2020, Hewson was a part of The Luminaries as Anna Wetherell. Eve's largest and the most successful project has been the 2021 Netflix mini-series Behind Her Eyes. Her portrayal as one of the lead characters, Adele, has drawn many praises towards Eve Hewson from the audience and the critics alike.

These A-level projects that she has been involved in must have surely contributed to Eve Hewson's net worth, and it lets her enjoy a prosperous life.

Eve Hewson Net Worth And Earnings

As per Celebrity Net Worth, Eve Hewson's net worth is estimated to be around $8 million. She has accumulated this sum through her acting jobs in movies and TV shows. Since acting is the primary source of Eve's fortune, the major fraction of that amount must've been contributed through her acting gigs. Some of her movies have made millions at the box office, so they are likely to add to her wealth.

Well, here are some of Eve's successful movies and their box office collection below:

Even though Bono's daughter, Eve Hewson, has been in more movies than she has been in TV shows, most of her net worth is probably made up of her TV wages. The main actors involved with another of Netflix's hit shows, Stranger Things, get paid around $250k to $350k an episode. Although Behind Her Eyes is not as well known as Stranger Things, one of the leads from Behind Her Eyes is likely to get paid somewhere close to that.

Similarly, her other two shows, The Knick and The Luminaries, are fairly known, and as a regular cast member Eve probably gets paid a good amount for it. Therefore, earnings and wages from all the TV shows and movies that Eve has been a part of have helped her gather a huge sum of money. Hence, she can live a lavish and fulfilling life with the help of her earnings.

Her earnings would surely help her lead an amazing life, and she needs to have an amazing life being the daughter of Bono. Speaking of Bono, her father has an estimated net worth of $700 million. It may take some time for Eve to reach her father's level, but let's hope she'll reach there one day.

A Rockstar Parent and Its Experience

Growing up with a rock and roll superstar as your father would surely make any kid's childhood different. The same was for Eve Hewson. Unlike any normal teenager, she would constantly meet and get to know various celebrities and musicians. In an interview with Jimmy Fallon on The Tonight Show, Eve mentioned that she and one of her best friends called many musicians from her father's contact book. She mentioned how she called Justin Timberlake and asked him a bunch of quiz questions that were written on the back of a milk carton. 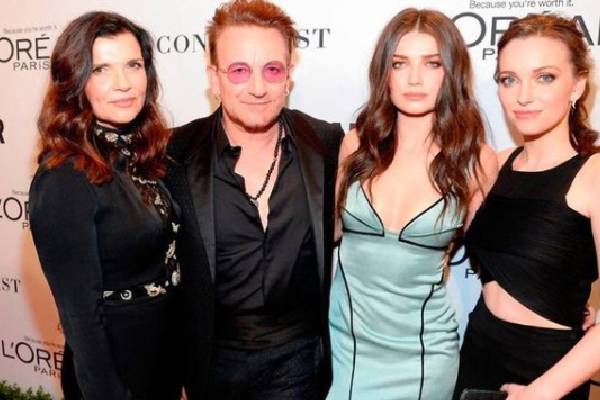 Despite all these shenanigans, Eve Hewson's father loved and encouraged these funny pranks. Eve mentioned in an interview how Bono would embarrass her by blasting a Backstreet Boys song and dancing to it. Despite all the fame and fortune Bono has amassed, his love for his family and his kids would never deplete, and let's hope to hear some more embarrassing Bono stories.

The love between Eve and her father is everlasting. But what about her love life.

As a rockstar's daughter, one would expect Eve to be wild and free, as it is associated with rock and roll. Eve probably had a few relationships in her high school. But her five-year-long affair with James Lafferty is one of her high-profile relationships. James, famous for Nathan Scott's role in One Tree Hill, became Eve Hewson's boyfriend in 2010. After their five-year together, the pair decided to part ways in 2015.

Since her break-up with James, Eve Hewson is rumored to be dating Max Minghella. According to various sites, the alleged pair started dating in 2015. The alleged couple has not made an announcement about their marriage plans or even about their relationship to the public, so it isn't very certain if they are, in fact, together. Despite the fact, paparazzi have caught the couple together multiple times. If Max is, in fact, Eve Hewson's boyfriend, let's hope to hear some good news regarding them in the near future.

Although Eve's relationship status is unknown, we extend best wishes to her and hopes for some news about engagement or even a child.