Derek Kolbaba is a professional bull rider who has achieved numerous victories in his rodeo career. Image source: Social Media.

Bull Riding is a historical activity that gained much prominence in the U.S. in the 1930s. In the present day, it has gained mainstream attention, becoming a mixture of American cowboy tradition and modern sporting enterprise that deals with big money. So, this sport is brutal yet equally appealing to younger generations for the fame and fortune it brings. Derek Kolbaba is a young rodeo champion who has carved his name in the books of PBR's history and stands in 15th place in world rankings as of now.

As his career progressed, Derek gained massive attention from the public. Thousands of admirers witness his every match, and his victories are celebrated with great joy. People are curious to know the rider's personal life and the inside details of his career. We will try to cover most if not all exciting facts about him in this short biography.

Grew Up With Rodeo Dreams

Derek was born on April 21, 1996, in the small town of Walla Walla in Washington, United States. He practiced bull riding from a young age to take after his dad, a professional bull rider. His rodeo dreams started at seven, having decided to follow in his father's footsteps. As such, the young boy received training, advice, and support from his old man.

Derek Kolbaba's father, Kyle Kolbaba, is currently engaged in the trucking and excavating profession. Moreover, it seems like he was not the only influencing figure in his son's career. Derek's mother is said to be a former equestrian barrel rider. Hence, him pursuing a rodeo rider career is relatively natural. Also, on his Facebook, he has Tia Kolbaba and Beverly Shortridge listed as his family members. Unfortunately, the Walla Walla native has not revealed much about his education.

Derek Kolbaba Net Worth And Career

Derek is an esteemed competitor with a history of success in many Professional Bull Riding events. He is recognized as one of CBS's winningest riders in its 15/15 Bucking Battles. Well, it might surprise those unaware that the Washington native won his first 15/15 Bucking Battle as a rookie. As of August 2022, Kolbaba stands among the top twenty in PBR's World Rankings. So, Derek Kolbaba's net worth must be significant.

However, there are highs and lows in bull riding, and this profession is rewarding and dangerous at the same time. There are always possible risks, and Derek has had a fair share of injuries in his career. For example, on June 5, 2021, he punctured his lung at the Dusty Gliko Bull Riding Challenge Touring Pro Division. As a result, he underwent surgery and took a break for a few months.

Nonetheless, Kolbaba's participation in numerous championships has earned him respect in the bull riding profession from the public and his fellow riders. As of August 2022, he has a record of 288 rides, and 30 event wins.

Now, let's have a look at some of Derek Kolbaba's career earnings and stats below.

Looking at the above table, one can deduce that the bull rider earns massively from his professional career. Moreover, Derek's career earnings sum up to $1,602K as of August 2022. Out of that, $191K has come from the 2021 season alone. In addition, the cowboy is also associated with companies like Monster Energy, Levis, Yeti, Can-Am Off-Road, Decked, Vexil Brand, Pneu-Dart, and Legacy Dodge. These sponsors must also benefit his income. Therefore, Derek Kolbaba's net worth must be immense.

Met His Wife Through Rodeo

The PBR rider is married to Aymie Joelle Kolbaba from Bickleton, Washington. The couple first met at a bull riding event. As her brother rode bulls, she often accompanied him and his daughter in competitions to cheer him. On one occasion, Aymie met her future husband, who hung out with her sibling after the match. Gradually, the pair got to know each other and started dating. The lovebirds have been happily married since December 2, 2018. 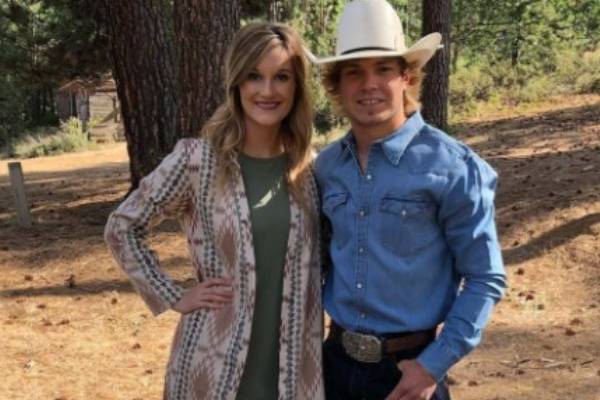 Derek Kolbaba's wife grew up in a farming town and was familiar with rodeo. In addition, she participated in barrel racing in local races while in high school. Besides, Mrs. Kolbaba founded an online clothing boutique, 'The Fringed Teepee,' in 2018. Her store strives to provide fashionable clothes and jewelry at an affordable price. Some of her boutique's items with their prices are listed below:

Furthermore, the beautiful couple is soon going to be parents. Aymie shared the good news through an Instagram post captioned, "Baby girl Kolbaba joining us in August." Derek Kolbaba's daughter is expected to arrive in August 2022.

Despite his early found success, the pro rider has a long way to go. Nevertheless, he aspires to be a World Champion someday and has worked continuously to move forward in that direction. Derek has garnered numerous victories but also suffered equally. So, we wish him good health, fame, and fortune in the upcoming days.