Dave Lawson is a well-known comedian of Australian nationality. He is one of the regular performers on the stand-up comedy circuit. In addition, Lawson has several acting credits under his belt. In his professional career, he has been nominated for several awards.

Away from the comedy scene, Lawson is a married guy. Also, did you know his wife is a renowned actress? If not, stick with us till the end to know who his spouse is. Additionally, know some of the details about his personal and professional life.

Grew Up With Two Siblings

The talented personality was born David Lawson on September 25, 1978. The actor grew up in the Bayside area of Melbourne, Australia, with his siblings, Matty Lawson and Amy Lawson. The Lawson clan must have had a wonderful time growing up together. 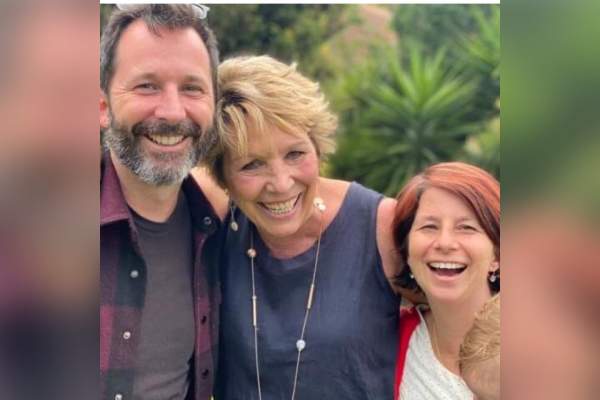 Dave Lawson grew up in Melbourne with his brother and sister. Image Source: Olga Lawson Facebook.

Furthermore, there's not much information about Lawson's father's whereabouts. As per his mom, Olga Lawson's Facebook, she is in a relationship with Eugene Vajtauer. Could it be Dave Lawson's parents have already separated?

Talking about his education, the comedian went to Haileybury College from 1991 to 1996. Before that, he attended Sandringham Primary School from 1984 to 1990. Later, he received a diploma in Marketing communications from RMIT University in 1999. The same year, he graduated with a Bachelor of Arts in Advertising from RMIT.

Dave Lawson Net Worth And Career

Dave has been involved in the entertainment industry since the early '00s. He has also worked for several companies and has made a good name for himself. Along with fame, he must have earned considerable riches. Thus, Dave Lawson's net worth must be a commendable sum.

In 2001, the Australian native made his acting debut in the music video, Gerling: Dust Me Selecta. His first film was the 2002 movie Lucky Day, where he portrayed the role of Reese. Then, in 2003, he landed a minor role in the television series Blue Heelers. Since then, he has appeared in numerous projects. Some of them with their respective box office collections are listed below.

Besides movies, the Melbourne native has also acted in many television series. Not only that, he has also appeared in short films, music videos, and several other entertainment projects. Some of the TV shows and short movies are listed below.

Thus, from all these acting projects, Dave must have earned considerably. Furthermore, from 2002 to 2007, Lawson worked as a Presenter on SN:TV, Nick takes over your school, Camp Orange, Sarvo, and Kids Choice Awards. He also hosted Guerrilla Gardeners and Dave and Kerley Show. From 2008, the filmstar worked at Triple R Broadcasters Ltd for six years. Also, for a year, he served as a Presenter Media Street at Seven Network.

Since 2004, Dave has been working for Toyota Motor Corporation Australia's Actor Legendary Moments campaign. From all these ventures, his income must have increased significantly. In Australia, an average annual salary of an actor is $45,331 (AU$65,000). Hence, from his acting career and other projects, Dave Lawson's net worth must be a commendable sum.

His Wife Got Down On One Knee

And now the moment to reveal the Australian comedian's spouse has finally come. Well, Dave Lawson's wife is none other than Sarah Snook, a Succession's star. Their love story is quite special, and you might not want to miss any details. So, keep reading!

The couple has been friends since 2014. Sarah and Dave used to live together, travel together, and were always excited to see each other. But despite all that, it was just an intimate friendship bond. Furthermore, the pair were never single at the same time, so their bond just remained platonic.

The friendship of many years turned into a magical love story during the COVID-19 pandemic. Though it was a period of many unfortunate happenings, for Sarah and Dave, it became an opportunity to move past their just friends status. In an interview, Dave Lawson's spouse revealed that she was incredibly lucky to find him during a time when there was so much heartache and sadness in the world.

While speaking with Vogue Australia, the Succession actress revealed that she got locked down in Melbourne with Dave at the beginning of the pandemic, and they fell in love. She added that if it was not for the pandemic, they might not have ended up together quickly. The duo's love for each other only grew stronger. In Sarah's own words, it was that or nothing, and she had got to be in.

So, Snook took matters into her own hands and got down on one knee. For Sarah Snook's husband, it must have been a magical moment. The couple later tied the knot in February 2021, in their Brooklyn home's backyard. The intimate wedding ceremony was graced with the presence of some of her roommates and her Succession co-star Ashley Zukerman.

Did you know the Snook-Lawson duo hid the good news for several months? The pair only disclosed they were married in October 2021. Overall, the lovebirds must be enjoying their blissful marriage. Also, the couple is yet to welcome babies, but who knows, they might be planning.

Nonetheless, Sarah Snook's husband must be doing well in his professional career. We hope to see him succeeding in more projects in the coming days. We wish him a blissful life full of happiness ahead.