Candice Coke is an American actress famous for her role in the movie The Algerian. Photo Source: Candice Coke's Instagram.

We often overlook those who aren't in the direct spotlight but who are essentially important in making others shine. In moves, all attention is taken by the lead, but rarely the supporting characters are noticed. One such person is Candice Coke, who is one of the most talented actresses in the American movie industry and is yet to get the recognition she actually deserves.

Candice Coke's been in the entertainment industry for a long time now. And this article discussed the actress' life, career, and relationship. Stick with us until the end to learn about her work and contribution to the acting industry.

Speaking of her family, Candice's father is Carl Constantine Aloysius Coke, and her mother is Kathleen Coke-Petrone. She has one sister, Venessa Coke. Not much has been revealed about the actress' family. Candice hails from New York. She studied Educational Theater at New York University while on a scholarship for spring board diving.

She was interested in acting and wanted to build a career out of it. Later, she moved to Los Angeles in pursuit of her dream and has been successfully working in Film and Television. Another underrated actress is Michole Briana White, who is known for her role as Fatima Kelly in the A&E legal drama 100 Centre Street.

Candice began her career dancing for icons like Michael Jackson, Prince, and many others. She was also a part of the popular American romantic musical comedy-drama La La Land. She was a traffic dancer girl in the movie. Her career in the movie industry goes way back.

The actress starred in an episode of All My Children as Indy in 2001. She worked as a dancer as well. In 2010, Candice became a part of the TV series called Days of Our Lives as Agent Clark. Her character was loved by her fans, and this was also a setting to show her skills to the world.

After years and years of being in the acting industry, Coke's talent was recognized and became a recipient of an award as well. She won the award for Best Supporting Actress for her role in the movie The Algerian, released in 2014.

Candice has been in the entertainment industry for over two decades now. Her latest work was in the second and final season of the TV series Kevin Can F**K Himself, where she is seen as detective Tammy Ridgeway. Coke has never failed to woo the audience with her acting skills in whatever role given. And although she has been doing pretty well in her career, she is deserving of more recognition than she already is getting.

The beautiful and talented actress Candice can easily turn heads when she enters the room. Looking at her, one will easily wonder who would be the lucky guy to win the actress' heart. If you were wondering who Candice Coke is dating, then search no more. She was previously married to director/writer George Valencia. We got you covered.

Now that the actress is no longer married, Candice Coke's boyfriend is Paul Kirkland, who is a creative director and choreographer. The exact relationship timeline of the couple is unknown, but Coke first posted a photo with Kirkland in 2018. The couple is still going strong and can be seen living their best life together in their social media posts. The actress openly talks about her boyfriend in the interviews as well. 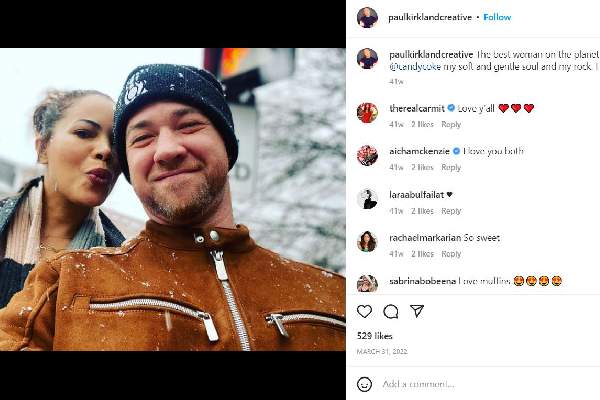 The love birds seem to be more in love with each passing year, and everything looks like all's well in Candice's love paradise. We wish the couple lifetime of happiness and togetherness.