Moshe Kasher is an American stand-up comedian, actor, writer, and producer based in Los Angeles. Although he has gained a significant amount of fame in stand-up comedy, he is also known for his works on Zoolander 2, Another Period, and Betty. He is the author of his 2012 memoir 'Kasher in the Rye.' The comedian has also hosted several podcasts in his career.

The versatile comedian, known for his scintillating crowd works, was named "Comic to Watch in 2010" by Punchline Magazine and 'Best New Comic of 2009' by iTunes. To add to his fame, he is also notably famed as Natasha Leggero's husband. Today, let's learn about the comedian's harsh childhood years, professional contributions, and romantic relationships.

Kasher grew up in Oakland's Temescal neighborhoods, where his family lived mostly on disability assistance and food stamps. While living with their atheist mother, the Kasher brothers regularly spent summer with their Hassidic father until his demise from Gaucher's disease.

Moshe attended Oakland's Temple Sinai school and was aggressive from his early years. His hostile behaviors led his mother to send him to therapy sessions at the age of four. From age 12 to 16, he was a drug addict festering severe substance abuse problems and several anger issues. After getting kicked out from four different high schools and undergoing several therapy sessions imposed by his mother, Kasher finally took the responsibility to clean himself up at the age of sixteen. Although his mother tried to save her child from drug abuse, Kasher himself straightened out his habits and built an impressive career afterward. They even talk about their life experiences on a show on Comedy Central.

Kasher earned his G.E.D at the age of sixteen and later began to earn as a sign-language interpreter. He studied theater and wrote numerous long-form monologues while at a community college in the Bay area. Later, Moshe enrolled at the University of California, Santa Barbara, where he studied and graduated with a degree in religious studies minoring in Jewish Studies. His comedy career began shortly after.

Following the advice of a longtime friend and fellow comedian, Chelsea Peretti, Kasher attended open mic comedy nights and soon discovered his talent for stand-up comedy. His first open mic was at the Luggage Store Gallery in San Fransisco.

Kasher's career officially started in the early 2000s when he regularly performed at the Punch Line and Cobb's comedy clubs in San Fransisco. During his early career, Kasher was featured in numerous comedy shows with fellow comedians Brent Weinbach and Alex Koll. In the year 2009, he decided to move to Los Angeles to take a shot at his career. Soon after, everything changed for the comedian professionally, and the move to LA was proven to be the biggest step in his career. 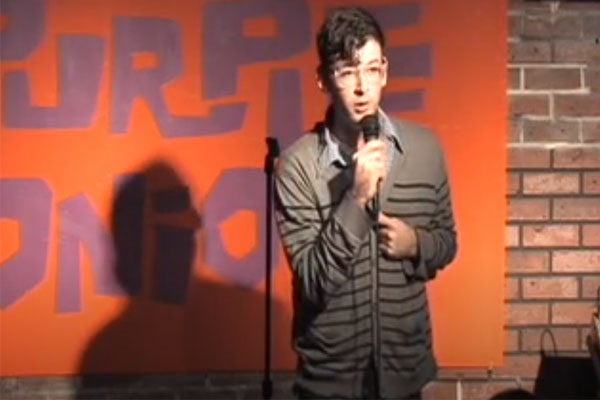 Moshe Kasher performing as a stand-up comedian on the set of The Purple Onion in his early career. Photo Source: Social Media.

In 2009, after being named "Best of Fest" at Aspen Rooftop Comedy Festival, he received an invitation to showcase his talent at the Just For Laughs comedy festival in Montreal that same year. Later, he also appeared on the Comedy Central series on Live at Gotham. The same year, he released his comedy album 'Everyone You Know is Going to Die, and Then you Are!' which was counted as one of the top 20 comedy albums of 2009 on iTunes. Kasher was even named Top New Comedy Artist of 2009 by iTunes.

Kasher's surreal humor and witty personality have also been featured on television programs such as Late Night with Jimmy Fallon, Conan, Laugh Factory, Comedy Knockout, The Late Show with Stephen Colbert, and many more. Furthermore, he has also been a recurring panelist at Nice One!, Lights Out with David Spade, and @midnight.

Talking about Kasher's international festivals, he performed in Rooftop Comedy Festival, Just For Laughs, Fun Fun Fun Fest, and South By Soth West in 2010, which was held in Texas as well as in Ireland. He has also appeared in the Melbourne Comedy Festival, which was held in Melbourne, Australia. Kasher is also a frequent attendee at SF Sketchfest. 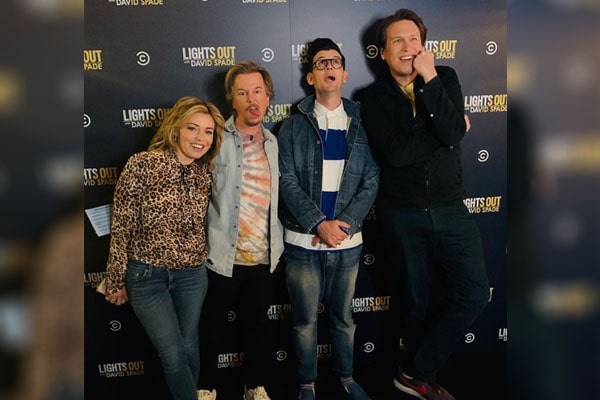 In January 2012, Kasher recorded his solo comedy special for Netflix, 'Moshe Kasher: Live in Oakland, in his hometown of Oakland. Kasher wrote and hosted a talk show series, Comedy Central, on Comedy Central, aired on April 18, 2017. Moshe and his wife have also co-released a three-part stand-up special entitled "The Honeymoon Stand Up Special" on Netflix.

Moshe Kasher is also an acclaimed author and writer. From publishing the long-form monologue "Look Before You Leap" in college to writing an episode of Betty which was directed by Crystal Moselle in 2020, Krasher has grown into an applauded published playwright. He has written several articles for Heeb Magazine.

In 2012, he published his compelling autobiography 'Kasher in the Rye: The True Tale of a White Boy from Oakland Who Became a Drug Addict, Criminal, Mental Patient, and Then Turned 16.' The memoir describes his journey with rough childhood years and serious substance abuse problems through his stints in rehab, jail time, and therapy as a teenager.

Furthermore, Kasher has written, produced, and hosted several episodes of 'Problematic with Moshe Kasher' with stars like Reza Aslan, Awkwafina, Kenya Barris, and many more.

Kasher as an Actor

Kasher has also worked as an actor in several films and TV series. He debuted as Andrew in the comedy film 'Sorry, Thanks.' He has acted in films like Spy, Zoolander 2, Shameless, and Wish Makers of West Hollywood. Similarly, the multitalented comedian has played several roles in TV series like Tubbin' with Tash, Laugh Trek, Another Period, This Close, and many more.

Furthermore, Kasher is also featured as Duncan Traub in an episode of Netflix's sitcom Brooklyn Nine-Nine created by Michael Schur and Dan Goor, which won two Golden Globe awards in 2014. As for his latest project, Kasher has voiced the character of Ditz in the animation series 'Klutz Muttz' released in  2021.

Kasher has also created several podcasts with some of the prominent names of Hollywood. He started with 'The Champs' along with Neal Brennan and DJ Douggpound. The show starred several famous guests like Wayne Brady, Lexington Steele, Blake Griffin, Bobby Lee, Sasha Grey, etc. In 2013, The Champs was awarded the title of "Best Podcast" as part of LA weekly's "Best of L.A." issue. Kasher has also hosted the monthly podcast 'Hound Tall Discussion Series'  premiered on the Nerdist Podcast Network. 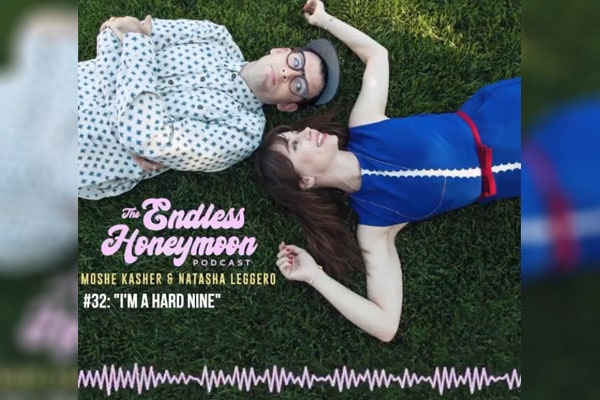 As for his latest project, Kasher has been collaborating with his wife on 'The Endless Honeymoon Podcast,' which was aired in 2019. So far, Kasher and his beloved wife have released over 152 videos on their YouTube channel and 143 episodes on Apple Podcast.

Moshe Kasher has been active in his career since the early 2000s. With over 20 years of working and earning in the industry as a comedian, actor, writer, and producer, Kasher must have made a massive fortune in his career. So, how much is Moshe Kasher's net worth?

Although Kasher has been in several dynamic professions, his wealth is mostly generated from his comedy endeavors. Some sites claim Moshe Kasher's net worth to be in millions, but without any factual proof, his official net valuation is off the charts for now. Talking about his earnings, Kasher makes a ton of cash from his tours and shows, which are mostly sold out in cities around the country.

Kasher's acting projects also might have been profitable gigs in his career. He has worked in many high-budgeted films and TV series like Zoolander 2, Another Period, and Betty, which grossed millions of dollars in box office collections. Besides, he has been an executive producer in several TV series like Problematic with Moshe Kasher, The Honeymoon Standup Special, and many more. Looking at his filmography profile, Kasher might have earned thousands, if not millions, as his salary.

Furthermore, Kasher has also garnered some of his income from selling his autobiography 'Kasher in the Rye.' The book is available for sale at Amazon and costs $14.99 for a Kindle version and $16.99 for a hardcover version. Revenue generated from selling his books could be less as compared to his salaries, but it has undoubtedly helped Kasher's net worth to increase.

Although Kasher's actual earning is not in the records, his partner is a multi-millionaire comedian. According to Celebrity Net Worth, Moshe Kasher's wife, Natasha Leggero's net worth is estimated to be about $2 Million. The couple is still working hard and is at the peak of their careers. With no signs of retiring soon, both Kasher and Leggero's net valuation is expected to rise in the future.

A Father And A Loving Husband

The famous comedian's personal life is not hidden from the public eye. Apart from his professional recognition, he is also known as Natasha Leggero's husband. So, when did Moshe Kasher marry? Does he have children?

Kasher proposed Leggero after a lovely date night in her favorite city New Orleans. In the Conan Show, Natasha describes Moshe Kasher's awkward marriage proposal. After finishing her dinner at a restaurant, they strolled beside the Mississippi River, where Kasher popped the big question to Leggero.

On October 11, 2015, Moshe Kasher married Natasha Leggero. Moshe Kasher's wife is also a fellow comedian, actress, and writer. After having a proper honeymoon, they were quickly back to their profession, setting fire to the stage as a couple. They started 'Honeymoon Tour,' which enhanced their skills as professionals and allowed them to bond as a couple. Just like vintage comic spouses Kasher and Leggero have learned and supported each other from their counterparts while traveling and performing together. They leaned on each other in their lonely moments while on the road.

On October 3, 2017, on an episode of 'The Late Show With Stephen Colbert,' Moshe Kasher's wife revealed that she was pregnant and was expecting a child next year. On February 24, 2018, Leggero announced that she and Kasher were blessed with a baby daughter through an Instagram post. Although the couple's daughter's name is not officially confirmed, some sources claim that she is named Frida Leggero. The sweet family of three are enjoying their life in Los Angeles, as seen on their Instagram Posts.