Guilherme Marchi is a popular former professional rodeo athlete well known for specializing in bull riding during the mid and late 2000s. Famous for dominating the Professional Bull Riders (PBR) circuit for years, Marchi established himself as one of the most brilliant riders in the world with consistent performances throughout his career. He also participated in the Championship Bull Riding (CBR) before joining the premium competition.

With the ever-growing popularity of rodeo, fans are excited to learn about the retired star. Even though he was involved in some of the best rides when he was active in the game, people still don't know much about how he generated buzz in the arena. So, in this biography, let's talk more about how Guilherme has been able to build such a great reputation and what he has achieved in his career, along with his personal life.

Marchi was born on July 22, 1982, to Brazilian parents in Itupeva, Sao Paulo in Brazil. Guilherme Marchi's mother, Marcia Marchi, was an influential part of his life who had the utmost belief in him. Likewise, the former's father is of Italian descent and was very supportive of his career. 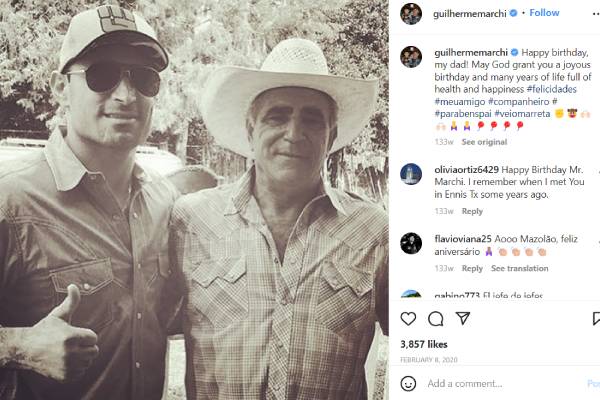 When the cowboy was just 15 years old, his mom tried to convince him to become a doctor. She adamantly told him that he was not going to be a bull rider, but he later convinced Marcia to let him follow his dreams. Since Guilherme Marchi's brother, Juliano Marchi, also rode bulls, their mama wanted him to pursue the medical field.

Unfortunately, Guilherme Marchi's mom, Marcia, went through a difficult health period as she was diagnosed with breast cancer for the second time after the doctors found a tumor in June 2016 during a routine check-up. Doctors removed the tumor in mid-July, and she was undergoing chemotherapy treatment. Further information about his mom's health has not been disclosed yet, but the rider was confident she could beat it again.

Moreover, Marchi claims that he might never have found such success in his PBR career without the support of his dad and mom. They always pushed him to do well in his career and encouraged him. Marcia even used to inspire him by calling him one of the best and urging him not to give up and keep fighting.

The Brazilian athlete also disclosed that without assistance from his parents, he might not have succeeded much in his career. He said so in reference to the time when he tore ligaments in his knee and bicep. Speaking of his education, he hasn't revealed where he studied.

How Did He Get Famous?

Marchi gained popularity for being one of the best bull riders in the world, having won a total of 36 events in his career. He had three streaks and achieved a lot of success with consistent performances ever since he started the sport. From starting bull riding at fifteen, he grew a lot as an athlete and inspired many people to follow the suit in the PBR.

Guilherme Marchi Net Worth And Career

Having started his career when he was a mere teenager, Marchi had a bull riding career that lasted almost 15 years. He won a multitude of trophies during that time, along with several individual accolades. With all the success, Guilherme managed to create a sustainable balance in the game. Hence, Guilherme Marchi's net worth must be immense.

As mentioned above, the Sao Paulo native won 36 events in his career with 64 ninety points rides in total. He had three streaks along with a ride percentage of 57%. Also, the incredible stat features a total ride of 806, including 1,404 outs. It's a tremendous number for the athlete, who retired in 2018.

Likewise, Guilherme's first-ever win came in 2004 when he won the Gilette tournament, earning $6,783. He has also won Monster Energy Buck Off, Sacramento Invitational, Challenger Tour Finals, San Jose Invitational, and several Built Ford Invitational, among others. With that, Guilherme Marchi's total career earnings was estimated to be $5.3+ million at the time of his retirement.

Here are some of Guilherme Marchi's earnings:

Moreover, his biggest victory came in 2005 when he claimed the Built Ford Tough Series World Finals earning a massive purse of $298,016.67, followed by finishing second in the 2008 PBR World Finals, grabbing a cash prize of $1.16 million. He has gone on to win various championships and finished second in top tournaments earning some massive cash prizes and stunning everyone with his consistent persistence and hard work for the sport he has always adored.

Looking at his brilliant performances over the years, it can be deduced that Marchi has set a high standard for himself. With some of the best wins in the world of rodeo, he surpassed expectations and is considered one of the best bull riders of all time. Hence, with all these achievements, Guilherme Marchi's net worth must be immense.

Eduardo Aparecido is another talented bull rider from Brazil.

Alongside having a successful career, the retired cowboy has also been able to tie himself into a happy conjugal life. He has been happily married to his beautiful partner Maria Augusta Seade Guerra Marchi in April 2018. Guilherme Marchi's wife can often be seen cheering for him on the sidelines.

Guilherme's spouse looks quite happy and content with him. However, the pair have not revealed where they first met. Still, as per several sources, the duo were dating for a long time before tying the knot. But, did you know Maria is the former world champ's second wife?

The Brazilian rider was previously wed to Patricia Costa Marchi. The exact details about the ex-pair's separation have not been made public yet, but she was a mother of two of Marci's children. Guilherme Marchi's first wife loves horse riding and constantly speaks about how proud she is of her kids. She has also launched Paty Cowgirl Foundation.

If there is anything Marchi loves more than bull riding, it's being a doting father to his three adorable children. As mentioned above, he has two kids from his ex-wife. Guilherme Marchi's daughter, Manuela Marchi, is his firstborn, who celebrates her birthday in September. Likewise, the rider's son, JG Marchi, arrived in July 2008.

Marchi welcomed his third child with his second wife on November 30, 2017. He is named Guilherme Marchi Jr. and is now big enough to follow his dad. He also loves riding horses and often can be seen having a fun time with his old man. 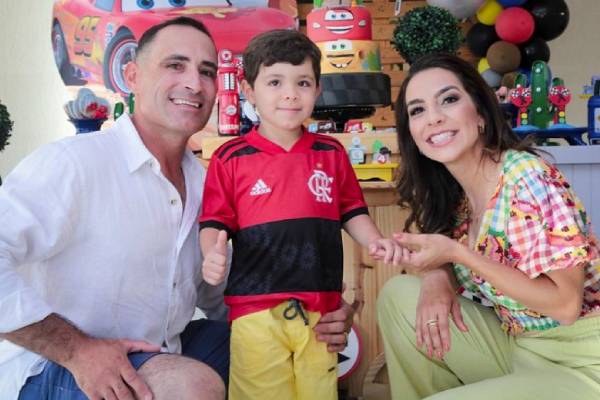 Overall, Marchi and his family are living a great and prosperous life. The former PBR rider has been able to concentrate on his family after his retirement and looks very joyful. Though he is no more active in the rodeo, his accomplishments are very inspiring.