Carrie Walton Penner is a K-12 education advocate and chairs the board of directors of the Walton Family Foundation. Image Source: Social Media.

The Walton Family Foundation is one of the most prominent school choice backers. The foundation has spent over $1 billion in the area so far. Carrie Walton Penner is one family member to watch closely as the Waltons' education philanthropy ramps up. Likewise, she has been engaged in education research, advocacy, evaluation, and philanthropy, for over two decades. She is also a K-12 education advocate. The gorgeous is also best known as the 3rd-generation member of the multi-billionaire Walton family.

Since she belongs to a legendary family like Waltons, Carrie's personal life has also been an exciting topic among people. Well, if you are curious about her lovelife and other details, don't worry, because this article will help you learn more about her.

The talented personality was welcomed into this world by her parents, Samuel Robson Walton and Patricia Rawlings Walton. Robson is an American billionaire and one of the heirs to the fortune of Walmart.

Is Involved In Walton Family Foundation

As we mentioned earlier, Carrie has been heavily involved in the field of education. She served as an education program officer at the Walton Family Foundation. Carrie also chairs the board of directors as well as the boards of several of its largest education grantees. The foundation mainly focuses on charter schools and environmental and water-related problems. Sam Walton established it in 1987.

Carrie Walton-Penner Net Worth And Career

For more than two decades, Carrie has been actively working in the field of education research, evaluation, advocacy, and philanthropy. Likewise, she is more into directing through board memberships in several key organizations. According to Dailymail, Carrie Walton Penner's net worth is estimated to be $5 billion.

Moreover, the gorgeous serves on the board of the KIPP Foundation, America's largest charter school organization. Before that, she had interned at the Rockefeller Foundation, Aaron Diamond Foundation, and Academy for Educational Development.

Thanks to her multi-billion worth fortune, Sam Walton's granddaughter has been able to invest in properties as well. Furthermore, it's no surprise that they own houses that are worth multi-million. Nevertheless, she may not have as much as her father, S. Robson Walton's net worth, which is $53.5 billion, but with hard work, who knows she can achieve that too soon,

Talking about Carrie's relationship status, she is a married woman. S. Robson Walton's daughter Carrie is happily married to Greg Penner. The pair met for the first time while attending Georgetown University as undergraduates.

Carrie Walton Penner's husband is an American businessman and venture capitalist. He is the current co-owner and CEO of the Denver Broncos and chairman of Walmart. Her partner is equally immersed in the education field. Moreover, he also works as a co-chair of the Charter School Growth Fund. 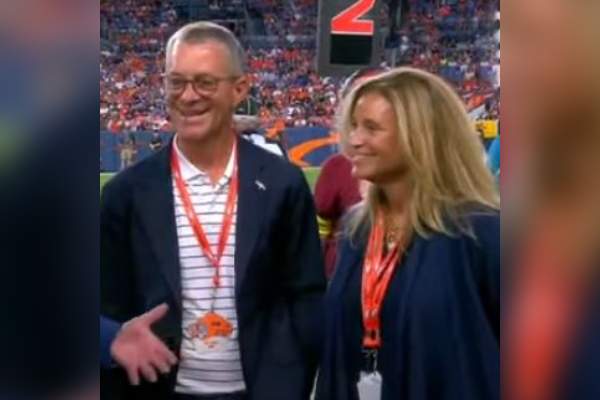 The duo has yet to disclose their wedding date, venue, and other marital details. Well, the couple is living low-key and perhaps Carrie and Greg don't want to be in the media limelight as much and avoid any rumor and controversy.

Despite her family wealth and philanthropic clout, Penner has rarely been written about by the media and keeps a low profile. Similarly, she rarely talks about her personal life. Nevertheless, Walton-Penner is the mother of four kids. But the information regarding her children's birthdates and names remains a mystery.

But seeing how most of the Walton kids are engaged in the family business, will Carrie Walton-Penner's children also follow in their family's footsteps?

All in all, the Penner couple must be living an extraordinary life away from the media limelight. We hope she discloses more about herself in the coming days and wish her a peaceful life ahead.